Detective work in an age of vampires, psychotic faeries and kick-butt heroines! 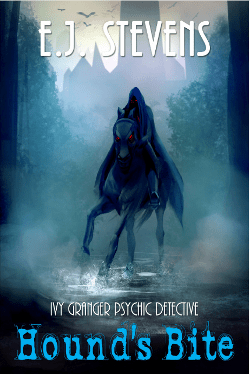 “The Ivy Granger Books are a blast, fast paced, full of action and just the right twists of humor. HOUND’S BITE is absolutely no exception. I’ll do you one better, HOUND’S BITE shows the continuing evolution of author E.J. Stevens into a force to be reckoned with in the Urban Fantasy genre. She holds her own with the likes of Delilah S. Dawson, and Faith Hunter. I’m looking forward to book six!”
— James A. Moore, author of the Seven Forges series

When E.J. isn’t at her writing desk, she enjoys dancing along seaside cliffs, singing in graveyards, and sleeping in faerie circles. E.J. currently resides in a magical forest on the coast of Maine where she finds daily inspiration for her writing.

Tanya offers up a round-up of these Hispano-American happenings

Those seeking bloodfests will be disappointed, but a great many others who still like vampire fiction will enjoy Darkly Dreaming.

Book Review: A Pair of Sword and Planet Tales