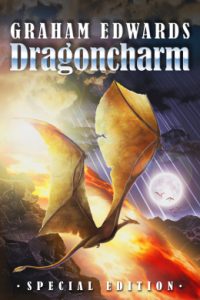 Writing about non-human creatures is a problem for speculative fiction.

On the one hand, anything truly alien, truly foreign to human experience will be all but incomprehensible to a human reader. (I can remember reading one or two short stories which portrayed an alien experience from the point of view of the alien; not only was there nothing in the experience that I could identify with, but, in one case in particular, there was nothing I could recognize.)

According to Protagoras, “man is the measure of all things.” I used to think that this was the height of arrogance, to think that all things must be measured by our limited yardstick. Now, I suspect it may be the only practical approach to understanding, in however limited a way, the universe, since it is the only yardstick that human beings are fully capable of reading.

On the other hand, writers often anthropomorphize alien creatures, giving them human characteristics and emotional makeups. The danger with this approach, however, is that if your alien creatures are too human, you will have lost the purpose of making them alien in the first place – you may as well have been writing about human characters from the get go.

There needs to be a sweet spot where there is just enough of the alien creature that is truly alien to human experience to make using the device of the alien worthwhile, but enough that is human so that readers will be able to follow a story and, perhaps, empathize with the characters. One common way of achieving this is to mix alien creatures with human beings, allowing each to comment on the strangeness of the ways of the other. When a work only involves alien creatures, the balance is a lot trickier.

Dragoncharm, by Graham Edwards, is an engaging novel, but it errs, perhaps, on the side of anthropomorphism.

Oh, and charmed dragons seem to be going insane.

Dragoncharm is epic in scope, not just because a vast battle between factions of dragons seems inevitable. While all of this is going on, some characters are warned to prepare for the “turning,” something that could not only potentially change the world of the dragons, but remake the entire universe.

The world of Dragoncharm is very well conceived, focused on the different natures of the two sets of dragons. Charmed dragons, for example, use their magic to fly, so their wings tend to be stumpy appendages rather than the large, muscular wings that the natural dragons rely on. Used to moving through the wide open skies, natural dragons find the corridors and caves of the charmed dragons claustrophobic.

Building on this foundation, Edwards weaves a credible story in which the two sets of dragons, having become isolated from each other, have come to fear each other. Rumours of the destructive nature of the insanity plaguing the powerful charmed dragons give the natural dragons cause to fear for their safety. For their part, the charmed dragons know that their numbers are dwindling, and have reason to believe that if they do not act, they will become extinct.

Edwards’ masterstroke is showing how both sides succumb to charismatic, demagogic leaders who set them down the path to war. The charmed are led by a dragon whose lust for power over others is palpable, while the natural are led by a dragon whose sanity is questionable and whose main motivation seems to be, in the immortal words of The Batman’s Alfred, “watching the world burn.” Dragoncharm is at its most insightful when it portrays the ways such leaders play upon the ignorance and fear of the populations they lead.

There were minor problems with Dragoncharm. At one point, for instance, a dragon is said to land on its feet, but the expression doesn’t work for an animal that doesn’t have feet. Moreover, in discussing the theme of the novel in his introduction to the reissued volume, Edwards kind of gives away where the story has to go, which I thought was ill-advised.

My main problem with the novel as epic fantasy, though, is that the dragons aren’t, well, dragony enough. Relationships, whether between children or parents, male and female (I didn’t get a sense that there were any gay dragons, although there may have been subtle hints that I just missed) or friends (and, I suppose, enemies) were all clearly recognizable as human. There is no reason to believe, however, that dragons would develop emotional connection to each other in the same way that human beings do.

There are occasional glimpses into a specifically dragon way of life. When dragons are relieved to see the objects of their affections appear, for example, they literally jump them and roll around on the ground with them to express their joy. To use another example: young dragons have a game/competition to see who can fly to a given point fast enough. More details like that would have been appreciated.

On the other hand, it is possible to read Dragoncharm not as fantasy (in his forward to the Special Edition, Edwards states quite specifically that he does not consider it fantasy), but as a fable. Fables often use animals as thinly disguised stand-ins for human beings. What this does is distance the reader from the action of the story, making the author’s moral easier to accept.

If read as a fable rather than a work of epic fantasy, Dragoncharm succeeds brilliantly.