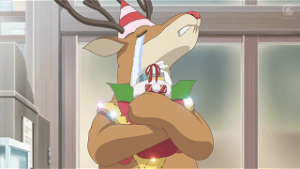 What does Christmas mean to a society with very few Christians in it? Japanese consumer culture is sooorta vaguely aware that there’s some kind of religious connection, but has enthusiastically adopted many customs depicted in Western media. So there are light displays, presents, Santa and his reindeer, and so forth. It’s a time for getting together with friends and especially romantic partners, and it is considered a sad thing to be alone on Christmas.

Then again, KFC managed to convince the Japanese in the 1970s that fried chicken is a traditional Christmas food (which is why the Olé! special ramen has a drumstick in it), so there are a few differences.

There are also a heck of a lot of special Christmas anime episodes out there, and I think this is the best one I’ve ever seen. Cute High gets a leg up from being themed around saving the world with love, but it was a great move to have the Beppu twins nearly hoisting themselves on their own petard. It gets its jabs in at over-commercialization (first time I’ve seen that in a Christmas anime episode) in between the increasingly desperate antics of the Battle Lovers without being too preachy, and sorted things out without being too schmaltzy about it. 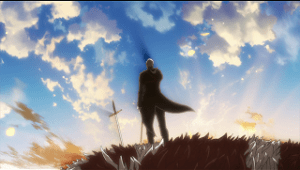 Re: ZERO -Starting Life In Another World- #21

He seems to have figured out by now what a total jerk he was. Now that he’s traveling with Subaru, I look forward to him learning some lessons in non-jerkitude.

The solution to the problem of multiple White Whales turns out to be fairly simple: realize that there’s still just the one, figure out which is the real one, and then, er, wail on it until it finally falls over. Crusch comes out of the battle as yet another person who looks better and nobler through being contrasted with Subaru, as she gives credit where it’s due and strong pushback against being recruited into his imaginary harem. I’ll miss her. 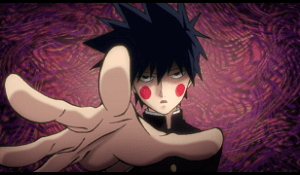 It turns out Ritsu’s always had strong latent psychic powers, and all that was necessary for them to emerge was for his life to become a living hell. With Mob’s power eruptions tied to his repressed emotions, and the ominous look of the one adult psychic, one starts to wonder if stable and well-adjusted people just can’t have ESP in this world. The Kageyama family is turning out to be well-named, at any rate: the name means “shadow mountain”.

On the other hand, Teruki seems to have improved a great deal on the personality side, and he’s still stronger than Ritsu for now.

Meanwhile, in Mob’s world, Reigen is still a low-down scammer, but it sure is fun to watch him out-scam the other scammers. He is still the best and worst thing happening to Mob most of the time.

Maybe not the worst thing now, though, as Mob has to confront what Ritsu is turning into. It’s getting hard to believe this was a comedy a few episodes ago. 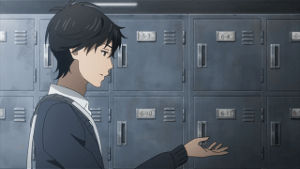 I’ll believe that Naho is way too shy even to take Kakeru’s hand even though they’re officially a couple and even walking to the school door together, but I’m having trouble with the idea that she doesn’t even know what the gesture means.

But it’s critical to the plot that she doesn’t take his hand, obviously. While the other five are having their moment of bonding and revelation on the rooftop, Kakeru will now be moping about how the girl who said she loved him now doesn’t even want to touch him. I’m guessing this is where his first suicide attempt happens in this timeline.

Speaking of idiot plotting, why would all five friends write letters and not tell any of their past selves that their other friends have gotten letters? As I’ve said before, I could see the other four going behind Naho’s back to add their own letters if the original decision was made by her alone, but I can’t think why the others wouldn’t tell their recipients to work together.

Okay, there was a good part too: Suwa and Naho realizing that trying to keep Kakeru out of the relay in the context of the new timeline is actually undercutting his confidence rather than helping him. Their eventual solution is great, and even if they miss the relay race I expect we’ll see that scene from the credits of them running together somehow.