I know that this week I said I was going to present part three of my history of computer generated images, but the San Diego Comic Convention happened last weekend; in the wake of that I’ve been listening to ungrateful fanboys whining about everything they see and have been driven to a point where I have to get something off my chest. So I am interrupting myself for this week. I’ll finish up the CGI thing next week, but for this week I have to say something. because I’m at that point.

You know the one, especially if you’re a parent and you’ve been listening to the kids whine about how unfair everything is and how their life sucks. You get to that point and suddenly the Dad comes out in you and you lecture your kids about how good they have it compared to when you were a kid.

You try to resist, because you know that it never really makes a difference and your kids will just stare at you like some alien that has just walked into the house speaking Klingon.

But I’m there now.

This past week I’ve been watching all this incredible stuff coming out of the San Diego Comic Convention, arguably the biggest and the best convention for fans of comics, science fiction and other genre movies. As is usual during Comic Con I’ve also been listening to the whiny fanboys complaining about how nothing is exactly how they want it. How [insert adaptation of your favorite comic/SF novel/sequel/spin-off/whatever] had better not suck or how the [Insert Comic book company name here – which one doesn’t matter] cinematic universe has lost it and has to be rebooted post haste.

To all you fanboys: STFU.

You’re getting so much amazing stuff and all you do is whine and complain. It’s like getting a huge haul at Christmastime and complaining because the phone I got you wasn’t the exact brand you wanted.

You know what I had at your age? I had Star Trek re-runs. Heavily edited on old and dirty and badly spliced film reels. We didn’t have the restored versions with new and shiny cgi effects.

We didn’t have a blockbuster movie, Star Trek Beyond to watch in the theaters – in 3D! – and a new (streaming) television series, Star Trek: Discovery, to look forward to. 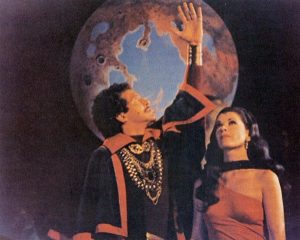 We didn’t have Justice League starring Ben Affleck an OSCAR WINNING ACTOR, we had… never mind. You don’t want to know what we had. Ninety minutes of our life we’ll never get back, that’s what we had.

I’m just gonna say it: you fanboys (and I don’t care how young or old you are) are ungrateful. You’ve got it made, kids! You’ve got it made in the shade and you don’t know just how good you have it. Yet you whine and you complain like none of this amazing stuff is good enough for you.

Now, I hear you say; “Yeah, Mike, but, cut us some slack! These aren’t gifts. It’s not Christmas. It’s a business transaction. The studios make a product and they sell it to consumers, and consumers have a right to criticize the products they’re being given. If I go into a restaurant, order a burger, and find it’s undercooked, do I not have the right to call attention that?”

Well, yes, you’re right. It’s not Christmas, and these aren’t gifts given to you by loving parents. These films, TV series, comics, what have you, they’re product. And absolutely, you have the right to complain about an undercooked burger.

But telling the waiter  “This burger better be good or I’m never coming here again!” before it’s even on the plate or telling the chef that his meals suck based on a picture you saw on the restaurant’s website strikes me as a bit entitled, not to mention that it makes you look like a dick.*

Look, if you watch something and you don’t like it, I’ll accept that. We may even talk about it. I frequently do with fellow fans. But I reserve judgement about something until I have seen the movie/series/comic/whatever rather than moaning about it beforehand.

See, I figure that saying “I hope it’s great.” is better than saying “Oh, man this is gonna blow”. And, yes. I’m not just talking about younger fans. I’m not trying to pull some ageist crap here. There are fans older than me who are just as bad and there are younger fans who have a fantastic attitude.

As a creator myself, it just guts me to hear fans talking smack about something sight unseen. This is where my frustration really stems from. As an artist and a writer I know what it’s like to put so much of myself into something, a book or a piece of artwork, only to have someone who doesn’t know anything about it, someone who hasn’t seen/and/or read the work dismiss it out of hand.

This rant started (as many rants do) on my Facebook page and it grew through interaction with Facebook friends, not the least of which was Percival Constantine, a fellow author and blogger whose passion for these subjects exceeds my own and whose argument helped refine some of my points. For that I am extremely grateful. Check out some of his fiction and his non-fiction articles. You won’t be disappointed.

Alright, I’ve inflicted you with my opinion quite enough. Next week I’ll get back to talking about CGI and the growing sophistication of the imagery as well as the honing of our own senses in regards to viewing it.

*Editor’s Note:  Not to mention someone just might spit in your burger before it comes out of the kitchen:  social interaction has consequences – whether you see it or not….