In the greater scheme of things, and especially in light of what happened last week in Dallas and elsewhere, this commentary is of very little consequence.

Nevertheless, I feel compelled to make the observation that the Asimovian robot is dead.

The police used a robot to blow up a human being.

This is troubling on many different levels, many of which have already been commented on in the mainstream press.

Gloria twisted the robot’s head and leaned to the right. He banked sharply. Gloria equipped the ‘coaster with a motor that went “Br-r-r” and then with weapons that went “Powie” and “Sh-sh-shshsh.” Pirates were giving chase and the ship’s blasters were coming into play. The pirates dropped in a steady rain.

“Got another one. Two more,” she cried.

Then “Faster, men,” Gloria said pompously, “we’re running out of ammunition.” She aimed over her shoulder with undaunted courage and Robbie was a blunt-nosed spaceship zooming through the void at maximum acceleration.  Robbie. Isaac Asimov, Super Science Stories, September, 1940. 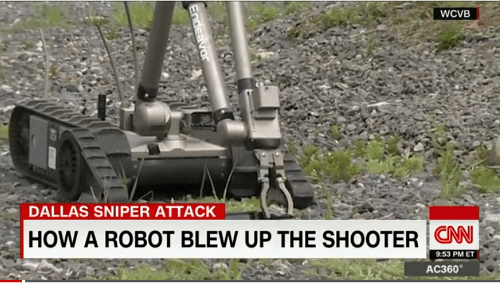 Asimov’s version of Campbell’s laws are as follows: