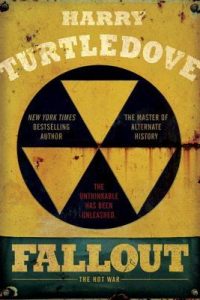 Bombs Away by Harry Turtledove was a good, if flawed, book. That being said, how does its sequel, Fallout, hold up to the original?

Our story continues (and maybe skip the next two paragraphs if you haven’t read Bombs Away) immediately after the atomic bombing of Paris. Soviet forces are pushing hard across western Europe and are on the verge of overrunning West Germany, forcing President Truman to resort to tactical nuclear strikes to stem the tide. The Soviet Union is rocked back on its heals, but its not out of the fight just yet. Massive stores of weaponry from the last war may be obsolete, but still useful when you care little about the lives of your soldiers. Still the Soviet Union is showing signs of cracking as rebellions break out in their satellite states and unless Stalin can strike back at the United States, there may not be a Soviet Union for much longer.

Granted the United States has seen better days as well. Joe McCarthy is riding a tide of popularity that might take him to the White House since Americans are angry after the nuclear strikes on the West Coast and continuing defeats in Europe and Korea. The United States is also having trouble supplying its forces fighting oversees after the destruction of the Panama and Suez Canals. Truman, who decided not to run for reelection to give the Democrats a chance at beating McCarthy, is desperate to scratch out a victory before his country elects a potential fascist or America’s allies in Western Europe make a separate peace with Stalin. Meanwhile, the war in Korea rages on, forgotten by most of the world, but still deadly to those few who still fight there.

At a book signing I attended years ago, Turtledove joked about how he was getting political in his old age and you can certainly tell he is with Fallout. I am not exactly sure when Fallout was completed, but McCarthy’s road to the White House does parallel a certain political candidate’s campaign in the 2016 election. And, why not? I have seen some describe the War on Terror as “World War III” and Soviet deceitful tactics (like painting their bombers in American colors to confuse defenders) do resemble contemporary terrorist tactics. Also if you are the type of person who doesn’t feel we are winning that world war and you are afraid you may be the next casualty, perhaps voting for someone who promises to be tough on your enemies doesn’t sound like a crazy idea.

Still I thought Turtledove did a better jobs of highlighting the flaws of both the communist and capitalist systems that are at war with each other. For example, characters in the East lament how their is no incentive to work hard since anything extra goes immediately to the state and you will see zero benefict, but you can’t complain about that unless you want to be taken away by the secret police. Meanwhile, in the West, other characters get angry how corporations see caring about the health of their workers or paying insurance money owed to victims of atomic attacks, as unnecessary expenses that they can do without and anyone who thinks otherwise is just a dirty commie. Thus you see characters in the communist world moving to the right with their politics, while characters in the capitalist world move to the left.

Politics aside, Fallout  as a book was…okay. If you liked Bombs Away, then you will like Fallout. It is a continuation of the story that begins right where the last book left off with all of the same POV characters who were still alive at the end of the first book. If you didn’t like Bombs Away, then you won’t like Fallout. Admittedly I do like how the stakes have gotten higher, while weaponry has actually devolved rather than advanced in the face of nuclear warfare, but its hard to sell something that is part two of the same story, rather then a new story in the same universe.

So in conclusion, if you are a Turtledove fan and enjoyed Bombs Away, I would check out Fallout. I found it to be an enjoyable read that managed to have some interesting commentary on modern politics. If you are not a fan of the first book, however, then you aren’t going to find much in this book to change your mind.

We all remember that first SF magazine we cracked during our own Golden Ages. John shares his own natal experience.