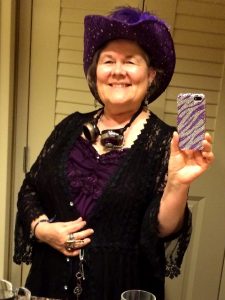 Today I’m going to talk Steampunk, which is a fun subgenre of science fiction romance. What is this, you may ask? Think modern technology, powered by steam and set in the 1800’s. Jules Verne and H. G. Wells always come to my mind, if they were writing their syle of science fiction, but nowadays. The ‘punk’ in the title derives from the idea of going against convention and expectation, as I understand it.  While the term was first used by J. K Jeter in the 1980’s, The Difference Engine published in 1992 by authors William Gibson and Bruce Sterling brought the concepts a lot of attention.

Steampunk can be a way of life, as evidenced by the blogs, Facebook pages and pinterest accounts I follow. Steampunk Tendencies is one of my personal favorites but there are many to choose from, with all kinds of fantastical gadgets, costumes and jewelry to be seen. The photo at the left is yours truly, going to a Steampunk Cowgirls Party several years ago, with my goggles and my mini-cannon ring, clockwork gears earrings and more!

I’m even an IndiGoGo backer on “Hullabaloo,” an animated steampunk adventure film. 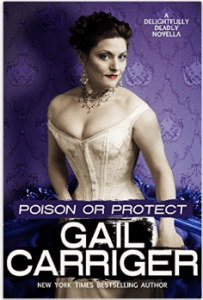 So let’s get to talking books! Gail Carriger is probably one of the most well known in the  steampunk romance world, with her Parasol Protectorate Series (Soulless, Changeless, Blameless, Heartless, Timeless) and many spinoff books from the original. Her most recent is a novella, Poison or Protect: A Delightfuly Deadly Novella. Here’s the story: Can one gentle Highland soldier woo Victorian London’s most scandalous lady assassin, or will they both be destroyed in the attempt?

Lady Preshea Villentia, the Mourning Star, has four dead husbands and a nasty reputation. Fortunately, she looks fabulous in black. What society doesn’t know is that all her husbands were marked for death by Preshea’s employer. And Preshea has one final assignment.

It was supposed to be easy, a house party with minimal bloodshed. Preshea hadn’t anticipated Captain Gavin Ruthven – massive, Scottish, quietly irresistible, and… working for the enemy. In a battle of wits, Preshea may risk her own heart – a terrifying prospect, as she never knew she had one. 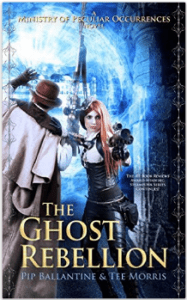 Another series I’ve enjoyed is the Ministry of Peculiar Occurrences by Pip Ballantine and Tee Morris.  Their latest is The Ghost Rebellion. Here’s the story: The chase is on! After rescuing Queen Victoria from the clutches of the Maestro, Agents Eliza D Braun and Wellington Books are in hot pursuit of Dr Henry Jekyll. While he continues his experiments on the aristocracy of Europe, he leaves a trail of chaos and despair in his wake. However when Eliza and Wellington run him to ground in India, they are forced to come face to face with ghosts from the past, and the realities of empire.

Meanwhile Ministry agents Brandon Hill and Bruce Campbell travel deep into Russia hunting down a rare ingredient to save Queen Victoria’s life. Amid the cold they uncover a threat from the revitalized House of Usher that comes directly from their new Chairman.

All in the Ministry of Peculiar Occurrences will find their allegiances in question, and their mettle tested as a new dastardly era of international intrigue dawns. 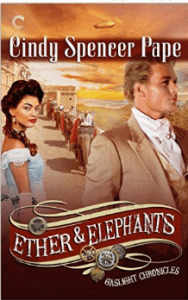 Cindy Spencer Pape is an author who definitely immerses herself in steampunk and her Gaslight Chronicles Series has been fun, with Ether and Elephants being the last in the series to date. Here’s the story:  Sir Thomas Devere and Eleanor Hadrian have loved each other most of their lives—but sometimes love doesn’t conquer all.

Their chance at happiness was ruined by Tom’s hasty marriage to someone else. Heartbroken, Nell left home, finding a new life as a teacher at a school for the blind. But when one of her supernaturally gifted students, Charlie, is kidnapped, Tom reappears and her worlds collide.

Tom claims he hasn’t seen his wife since the day of their marriage…yet he fears the missing student could be his son.

The deeper they dig, the more Tom and Nell discover: a deadly alchemist, more missing gifted children and long-suppressed feelings neither of them is ready for. A race on airship across England and India may lead them to answers—including a second chance at love—but only if all of British Society isn’t destroyed first. 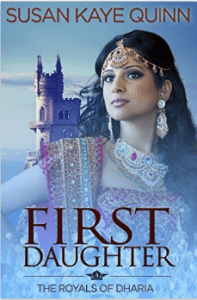 Susan Kaye Quinn’s The Royals of Dharia series takes place in a fantastical land with all too real problems. The third book in the series is The First Daughter and here’s the plot summary: The war has begun, and with the Queen of Dharia on her deathbed, Aniri’s excessively-proper eldest sister, First Daughter Nahali, finally sees her chance to claim the crown. Aniri and Nahali have never seen eye-to-eye, not since they were girls running through the palace courtyard, but with Prince Malik and Second Daughter Seledri kidnapped, Aniri can’t afford to fight with her sister.

So she follows the First Daughter’s orders and prepares for a war she fears will destroy everything she loves. Her sister has spent her entire life preparing for this job—Aniri prays to the gods Nahali knows what she’s doing.

But when the Queen calls the two Daughters to her bedside, she sends Nahali off to prepare for war… and tasks Aniri with a secret mission. She must go after the power-mad prince of Samir and stop his deadly skyship. It may cost Aniri everything, including a chance to ever return home, but she defies the First Daughter’s orders and embarks on a desperate mission to save the people she loves from a war that will tear all three Queendoms apart.

A steampunk series I haven’t yet read myself is Magnificent Devices by Shelley Adina. There are ten books in the series, apparently many strong female characters, and quite a few rave reviews, but as always best to sample first and reach your own decision. Book 10 may be a cliffhanger or come to a sudden ending, as far as I can tell from various reader reviews.

If you’re in the mood for a steampunk movie, classics such as “From Earth to the Moon” or “20,000 Leagues Under The Sea” come to mind, also the animated “Treasure Planet” from Disney (which I loved). I liked the Top 10 List from RebelsMarket (they actually give you 18 movies, including some anime!).

Do you have a favorite steampunk romance to recommend?