Most, if not all of those reading this know the feeling:  You look at the world around you and realize this you’re living in a time that was once only found in the stories you read.

No, not exactly, but pretty darn close in many respects:  we’ve got computing systems that keep hinting at being capable of AI;  medical technologies that keep hinting at immortality; transportation systems on the verge of “pole-to-pole in an hour”; material science that has us wearing unimaginable garments; manufacturing technologies that are getting really close to a form of instant replicator.  We’ve discovered thousands of exo-worlds and are on the verge of finding a handful capable of supporting life.  The list is endless.

And these science fictional concepts made real aren’t specialty items or things reserved only for the upper-classes.  They’re all around us and we interact with them daily.  Take the supermarket for example:  I can’t begin to catalog the agricultural advances or the genetic advances that go into the food on the shelves;  I’ll just bet that some of those produce trucks are filled and packed in a warehouse operated by robots, and don’t get me started on the data that is gathered at checkout.

Checkout. If you think about it a little loosely, whenever you use the self-checkout machines, you’re interacting with a specialized robot.  It’s certainly not humanoid, has a limited range of capabilities (and even so – it can weigh things, keep count of things and can make change) and a piss-poor vocabularly.  (I don’t know about you, but it gets my back up every time a machine tells me to do something: “Select your form of payment…Remove your items from the bagging area…”.  How about “Please”, or even “You may take your items now…”.) Nevertheless, it’s not too many generations removed from Asimov’s Robbie and one can ‘play’ with it merely by going to the store.

I refer to the express checkout lane.

I know you’ve seen them.  They’re usually positioned to one side or the other of the checkout area, more often than not also serving as the lottery and cigarette sales area.  More often than not it’s comprised of one or two registers, each of which has a sign in a prominent nearby location that says something like – 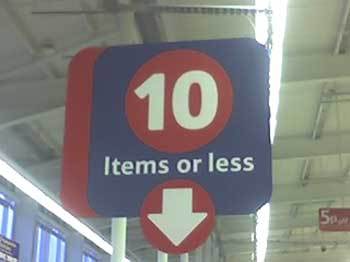 I will admit up front that I’ve got a thing about the Express Checkout line – but based on a quick survey while searching for the above image, I have determined that I am most decidedly not alone in harboring this peeve. Which is that no one should be in that line, no one should even be thinking about getting onto that line, if they’ve got 10+N items.

The store has gone to no small expense to set up a special area designed to meet consumer demands, in particular the demands of the customer who is in for a quick purchase.  These special checkout lines benefit the store’s economics and customer perception as well, by offering an outlet that clears customers from the store in an efficient manner, while maximizing their use of personnel.

Perhaps my buying habits are outside the norm, but I find myself at the supermarket almost daily, and usually with – you guessed it – ten items or less.

Perhaps the fact that I am an efficient grocery shopper plays into my peevishness as well:  I make a point of memorizing the store layout.  I know the route I’m going to take through the store before I get there.  I know whether I’ll need a cart or a basket before I step through the door.  I even know the foot traffic choke points (right by the flower stand and in front of the pharmacy) and have alternate routes mapped out  in the event that too many people have decided to vacation in between the drugs and the batteries today.

I see no point in wasting anymore time in pursuit of sustenance and necessaries than I have to and have taken the time and applied the brain power to analyzing and controlling my role in the equation.

So why is it that 8 times out of ten, the question I want to ask that troglodyte in line ahead of me is “So, did you fail English or Math?”

I’ve actually asked that question of a real troglodyte on several occasions (haven’t gotten punched out yet, but I’m waiting…) and the response is priceless:

I repeat myself:  “I asked if you failed math or english in school.  Obviously you either can’t read or you can’t count”, as I gesture to the sign.  (I could probably also remark “I guess you’re not a Heinlein reader….”, but that reference borders on the extremely obscure when it comes to troglodytes.)

Responses fall into one of three categories:   the offended huff and shoulder turn, the aggrieved in-a-hurry explanation or the ‘these items really count as one’ plus sheepish grin excuse.

Rule 1: If the register beeps when the item is passed over the scanner, it’s one item.  That’s grocery math.  A “Beep” equals one.  Ten beeps equals ten items.  I don’t care if it’s “two for the price of one” or “buy one get one free” or eleven cans of cat food in one tall stack, if that register beeps more than ten times for a customer, that customer is a douchecanoe and therefore outside the law of custom and decorum.

I know they are douchecanoes* for certain fact because everyone in line behind me who has also scrupulously followed the rules offer comments that agree with my sentiment (and not a few get out of line – guess they could count after all), smiling, nodding knowingly and muttering their own complaints about the circumstance.

Not that any of them would speak up for themselves, of course.  They’ll just deal and have a slightly worse day than they otherwise would have. Because that’s what douchecanoes do:  add to the general background misery of our everyday existence.

When I decided that my questioning of those whose education left something to be desired might itself be perceived as canoery behavior, I modified my tactics.  I started asking the checkout person why they were allowing more than ten items per customer.  Certainly they’d read the sign.

Every single one of them sighed in resignation, offered some statement about having tried to do something about it in the past, only to be chastised by upper management for upsetting customers.

What am I, chopped liver?  Or is it only those people who do have more than ten items that are considered “customers”?  Someone in the head office needs to do a bit more data-mining; I’ll bet they make more profit off me than they do off of some mom pushing a cart filled with groceries and babies (on a percentage basis, of course.  Maybe that’s the key – the store is focused on cash flow and not on actual, real profit….)

Having learned that the checkout person is not the proper focus for my ire (I think they suffer through this as much as I do, with the added insult of having to deal with customers like me), I have moved my complaints to the service desk, logging no less than a dozen complaints filed over the past month.  “Hi.  Me again.  Another customer just went through the Express Check Out line with more than ten items, and I’m wasting even more of MY time coming here to complain about it.”

I have also written to corporate HQ and included what has now become a growing list of solutions, the latest of which I will share here first:

Since people seem more than willing to be instructed and guided by machines (witness the self-check out robot that tells me when I can leave the store), I strongly urge supermarket chains across this great nation to install Express Check Out Robots.  They’ll look something like a Ceylon from the Battlestar Galactica franchise (new or old version hardly matters), or maybe like a Borg from Star Trek.  Something like this: 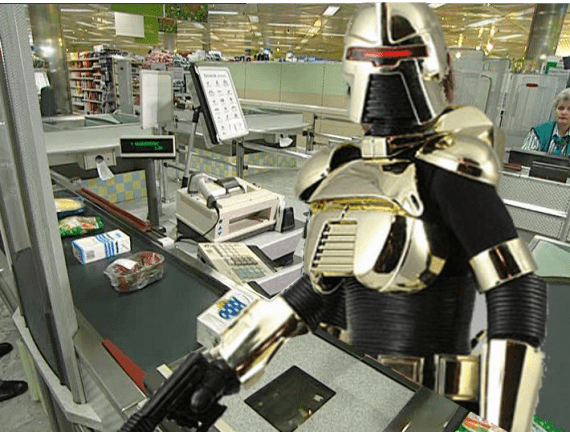 Showing up with more than ten items…well, you’ll become intimately familiar with the word “Exterminate”; the sign above the registers will flash “Douchecanoe with thirteen items!!!” and then, then, the robot express checker will lean forward and state, in a clipped, gravelly robot-voice “REMOVE EXCESS ITEMS.  YOU HAVE TEN SECONDS TO COMPLY. NINE, EIGHT, SEVEN...”.  Note that it will not ever say “please“.  This is a command from your robot overlord, not a request from a check out person.  This is a checkout Terminator. It can’t be bargained with. It can’t be reasoned with It doesn’t feel pity, or remorse, or fear. And it absolutely will not stop, ever, until you only have ten items or less!

Bonus for supermarket corp:  it doesn’t need to be paid, take a lunch break or come down with the crud on the day you’re short staffed.  No one will run to Customer Service to complain – ever.  (Well, they might get a step or two away from the counter….), and, with a few relatively simple modifications to its primary mission chip, it can insure that no customer ever need go to the Express line because they’ll all always have more than ten items in their carts.

*I learned that alternate for asshole from a science fiction writer on Facebook – ain’t the future grand?