A tie-in novel based on a new game, Song of the Deep by Brian Hastings is a charming story with the potential to become a bedtime favorite for years to come. 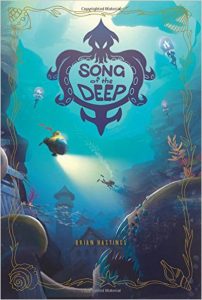 When Song of the Deep by Brian Hastings hits the bookshelves next month from Sterling Children’s Books (Sterling Publishing Co.), young readers will be introduced to a charming new character presented in the newest game of the same title from Insomniac Games in partnership with GameStop.

Hastings is the Chief Creative Officer for Insomniac Games, and if the compassion he puts into this story emulates the same consideration he puts into his gaming ideas, the game should be an entertaining game.

Our heroine is Merryn, a twelve-year-old girl who is pressed into an unlikely quest in search of her fisherman father who tragically disappears at sea on stormy night. After building a submersible craft, she uses her well versed knowledge of the sea along with some tender memories of lullabies her mother sung to her long ago to help in her search. Facing strange creatures along a fantastical adventure, Merryn takes readers on a memorable journey.

The character Merryn is very intelligent for her age, and her ability to communicate with many of the underwater creatures gives one the feeling that they are reading an advanced version of Dora the Explorer. Though she doesn’t break the fourth wall like Dora did in her journeys, readers do get the sense that they are a part of the story. This is understandable since the story is a tie in novel to an upcoming game, and it does seem author Hastings is going for that interaction feeling.

The science behind the story is more fantasy than fact, and this can be somewhat of a distraction at times.This element could also be a telling divider between the plausibility expected of a literary world and the necessary conveniences of found in the gaming world. The simplicity of the submarine Merryn is able to fabricate in such a short time is described with precise details, but the fact that it is able to submerge, maneuver, and dive to such depths at all would in fact have the Navy scratching their heads if not clambering for the plans.

The other characters who Merryn meets along her journey like a mermaid and a steampunk sea horse are well conceived and should be just as entertaining in the game version of the story, should they return in that medium. Of course there are also some ghastly creatures that become daunting obstacles for our hero, and they should be strong opponents in the other formats as well.

In all, Song of the Deep by Brian Hastings is a cute children’s story about overcoming adversity that could easily become a bedtime favorite for years to come. Then again, if an app version of the game ever evolves, there may be a lot of glowing lights hidden under the covers of children who are supposed to be asleep. Though the novel is short, a mere 170 pages in length, the book is an easy read for young and old. Not quite as short as some of the classic fables we grew up with as kids, it still has that majestic feel-good quality that could translate to success in other forms of media besides print and gaming.

Christmas 2012 was very good. And one of the reasons it was so good was that among the presents that Santa (in this case my son, J. Michael) left under the tree was a hard-cover, coffee table-sized book entitled Tarzan the Centennial Celebration: The Stories, the Movies, the Art. Published by Titan Books, it is […]

“Game of Thrones is very compelling. But so is a train wreck.”

Film Review: The Hobbit: The Battle of the Five Armies