Moonwalk by H. B. Fyfe is science fiction’s short story equivalent of Hemingway’s classic The Old Man and the Sea, minus all of the fanfare and accolades. 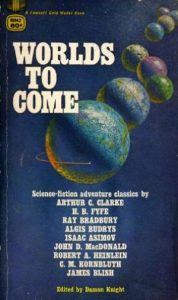 Moonwalk is a novelette by U.S. born writer H. B. (Horace Brown) Fyfe (1918-1987). After first appearing in the November 1952 issue of Space Science Fiction (Space Publications, Inc.), the story has appeared in numerous other publications centering on space pioneers. The version reviewed her is from the 1968 Fawcett Gold Medal Book publication of Worlds to Come, a paperback anthology edited by writer/critic Damon Knight which also including works by Clarke, Bradbury, Asimov and Heinlein.

Moonwalk is one of those classic examinations of the spirit, wonders, and dangers surrounding the exploration of space. But more closely, it is an examination of the vastness of space and the miniscule role humanity plays in its emptiness.

Paul Hansen is an astronaut, part of an exploration team stationed on the Moon. After stepping from the vehicle along the ringwall of the crater Plato, he watches it tumble over the ledge, taking the lives of mechanic Groswald, astronomer Van Ness and geologist Fernandez with it. All alone without any communication, He begins the long treacherous trek in search of a rescue.

The story bounces back and forth between the Hansen character and the worried crew back at the moon base trying to figure out what went wrong. As they struggle with their search efforts, the stranded astronaut is left to his own skills and wit to survive. It is yet another trek into the trenches of the human condition.

There have been numerous works surrounding the dangers of surviving in space and many of these have examined the human psyche when faced with the isolation of space. The 2011 novel The Martian by Andy Weir gives readers a personal look at being left behind while the 2013 Alfonso Cuarón film Gravity staring Sandra Bullock and George Clooney even touches on the hallucinogenic dangers of space exploration.

But then it hit me. The Fyfe story sounded familiar, but not in the Hollywood action suspense kind of way. It turns out, there are some notable parallels between this story, and one that is considered a classic piece of cultural literature, a story that many of us had to sit for hours in grade school grudgingly writing critical essays about. (Okay, that was probably just me, and the analysis’ may have seemed longer than the original piece by the time I was done.) We’re talking about Earnest Hemingway’s short novel The Old Man and the Sea.

Here is a passage from the story Moonwalk that could have come from the pages of Hemingway’s book if the old man happened to go fishing – in space – on the moon. See if it rings a bell.

“Then it came to him.

There was the same monstrous, chilling power, the same effect upon the beholder that here was a massive, half-sentient entity against whose callous strength and cruelty nothing human could stand. It was a thing to observe from a safe distance, to cower from lest it somehow become aware of the puny structure of bone, blood, and flesh spying upon it. Then there would be no escape, no withstanding the crushing force of its malice. But he was on no safe cliff. He was down in the sea.”

Hemingway’s old man Santiago represented honor in the face of defeat and a stoic defiance against the hardships of the natural world. It is a spiritual journey for both the protagonist and the reader. As noted in the passage above, Fyfe’s astronaut Hansen experiences the same epiphany, yet it is doubtful very many readers were asked to present similar critical breakdowns to their teachers. Go figure.

It is also curious that Moonwalk was first published in 1952, coincidentally the same year Earnest Hemingway’s short novel The Old Man and the Sea was published. I believe there may be a conspiracy theory in this somewhere. Or perhaps, I just want there to be a conspiracy.

Moonwalk by H. B. Fyfe is science fiction’s equivalent of Hemingway’s The Old Man and the Sea, just without all of the fanfare and accolades. It may not be on the long list of literary classics, but like so many other works in the science fiction genre, it should be. For one longtime member of fandom, those grade school essays may not have seemed so tedious if stories like this had been applicable.

Two new reviews by Steve: the new Michael Moorcock book and The Avengers: Age of Ultron. Are they worth it? You bet they are!