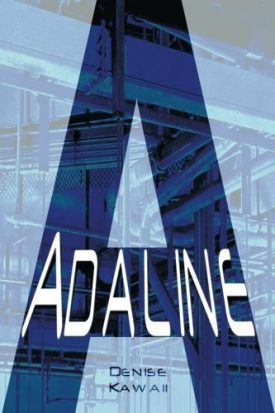 The opening of Adaline, the third novel by Oregon’s Denise Kawaii, brings to mind the setting and first chapter of Aldous Huxley’s Brave New World, the classic story of engineered offspring, but ventures into new territory in short order. Adaline focuses on the story of one Boy out of over a million, Number 1124562, called “62” for convenience. 62 is in training to determine which career field he will follow to serve his community, and Adaline, the name he is taught to call his world.

62 soon finds his daytime existence, in dreary classrooms with dozens of other Boys who look just like him, hampers his imagination and creativity. After his seventh birthday, however, his restlessness and boredom are greatly alleviated by the vivid dreams he begins to have every night, while tucked up snugly in his sleeping cube. But he does not know that, out of all the Boys at his school, he is the only one who dreams.

When his favorite teacher, 71, a grown Man, begins to appear and talk to him in his dreams, 62’s happiness reaches new heights. They share a world outside the classroom and the sleeping cubes, with sunlight, clear blue skies, and no other people. But soon 62’s excursions into his fantasy world become known to his school’s Nurses and a particular doctor. They start to monitor 62 closely and conduct tests on him to try to rid him of this anomaly.

While the two main characters in Adaline are well-developed, the others are caricatures or stereotypes for the most part. The background of the story is vaguely sketched, leaving the reader with many questions: for example, why are both the world and the story called Adaline? No reason is provided for this choice of title; the story might have caught the reader’s interest more if it were titled “The Numbered Boys”. The reader’s curiosity is also excited, but not fulfilled, by speculating on why Adaline was created by its founder, and why the only “female” characters in the story are the robotic Nurses.

It might take a sequel (or two!) to address these questions. In the meantime the reader knows only what the characters know, and thus cannot engage in enjoyable anticipation of how long it will take the characters to learn what they need to know about the world of Adaline.

On the whole, however, Adaline explores both the dangers of too much conformity and those of being “different” in such a society very well. I certainly hope Ms. Kawaii will set future stories in the world of Adaline, the sooner the better.

Oh, Toni Anzetti, or Ann Tonsor Zeddies, whichever. She’s magnificent in her creation of alien worlds. Not so magnificent in her characters. The Typhon series isn’t widely known, and I’ve never really met another who’s discussed it. However, it is an interesting trilogy involving the genetic manipulation of human DNA, and the wonders and monstrosities […]

Why no Mars TV? (Let’s hope we don’t have to wait for the reality show…)

Finding the Courage To Write