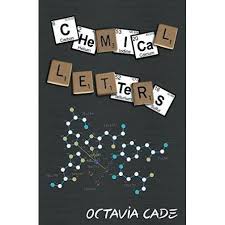 Octavia Cade is a scientist and has a PhD in science communications. She also writes speculative fiction. While this is her first book of poetry, she has written many short stories, 5 novellas and a novel, which have been published in various places.

Chemical Letters is a collection of linked poems, that tell the story of Caroline, a scientist who finds herself within the Periodic Table, which is, surreally, an apartment block of which Mendeleev (the creator of the Periodic Table) is the building manager and in which various scientists andimportant historical figures, such as Einstein and van Gogh, occupy “rooms” labeled with the elements to which they are connected. At first, it’s all a bit confusing and it helps to have read the blurb first, otherwise, I’m not sure there’s enough information in the first few poems to really understand what’s going on. Listen to the opening poem and the first “elemental” poem:

If I were not the type of person who enjoys learning and prefers to go the extra mile to understand what I’m reading, going in search of missing knowledge, I may not have enjoyed this collection nearly as much. As it turns out this is one of my favorite reads of late. I read a PDF version of the book and was able to switch back and forth between it and an interactive version of the Periodic Table. I’m not a scientist and it was back in High School (suffice it to say this was many years ago) the last time I thought much about chemistry and the elements, but these poems made me want to look up the elements and the names of the people and places, things and historical events that the character of Caroline encounters on exploration of her new surroundings. Why were these things significant? What makes them interesting to Caroline? It is clear that Caroline is a scientist and an insider and has an intimate knowledge of the Table. She name-drops left and right and there are some interesting puzzles as she figures out how and why she’s there.

is shoved into Rutherford’s cannon

with her arms and legs tucked under.

(the walls of the room are covered in murals

but they are scratched out, defaced

and the nose of the boat is covered in paint.)

My one great mistake he says.

Now I have this honour, though it feels like punishment.

Cade features the women who figure into the Periodic Table – Lise Meitner and Marie Curie and weaves their stories, and all those who make appearances, into Caroline’s. In the end, it’s a very satisfying read. The poetry is descriptive, but gives a slightly surreal feel, as Caroline moves around and flits from place to place, through time and space as well as undergoing transformations just like in a chemical experiment.

Instead of burning into ash,

love-handles going up in smoke,

Caroline finds herself getting fatter in the fire–

near a thousand degrees, and she’s not even sweating.

She lies on her back, sleek and sleepy with sunshine.

The heavy lines, the grittiness of half ground pigment

press painted ridges into her spine.

Chemical Letters has been nominated for the 2016 Elgin Award for best poetry collection (of 2014/15) This collection should be required reading for all high school chemistry students (especially girls). It will light up their interest in the elements and science in general. Enthusiastically recommended.