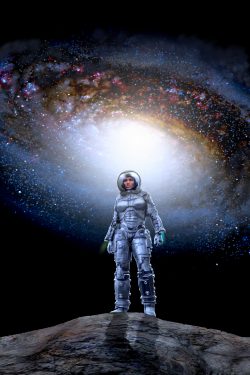 Earlier this past week I made the (fateful?) decision to move ahead with the Amazing Stories Special Edition, the issue that will feature our writing contest winners and that will serve as a prelude to regular publication of the magazine starting in 2017.

I’d previously announced this project as one that would also be testing our innovative plan for distribution of a print magazine.

Almost immediately following that announcement, I learned that my wife had breast cancer that has spread to her liver.  It is an understatement to say that this news threw all of those plans into a cocked hat.

But not for the obvious reasons.

Part of that “innovative distribution plan” involves delivering sufficient copies of the print edition to Worldcon, where they are slated to be given out to the entire attending membership, for free*.

I felt that my personal presence was absolutely required to make the whole thing work (particularly the followup where I buttonhole people for participation).  I still believe that to be the case, but I’ve also come to believe that this NEEDS to happen and that if I am unable to attend the con, Amazing Stories will still be able to benefit.

The distribution plan is based on a simple idea: bring the magazine to where the readers are.  Conventions.  And I can do that, economically.  What better way to kick that off than at the biggest, most talked about traditional convention there is?

So that’s what we’re going to do.  If I’m not there to hand out copies, someone from Amazing Stories will be.

*Here’s how its going to work:

All those attending MidAmericon2 will have the opportunity to pick up a copy (one per customer, at least until Sunday;  if there is surplus, we’ll figure something out).

Supporting Members will have an opportunity (after the convention) to obtain a free electronic edition (one of several formats).  They will also be offered a print edition (inventory dependent) for the price of shipping.

Those of our subscribers who signed on at Loncon3 and Detcon1 will also be offered a free electronic copy (and print for the price of shipping) as part of their subscriber benefits.

The issue will also be offered for sale (print and electronic) through the website and other outlets.

The issue is in digest format and will contain our ten contest winning stories, a non-fiction piece on the entwined history of Worldcon and Amazing Stories and a lengthy excerpt from a forthcoming novel by a well-known author, as well as the usual editorial & etc. content;  color (inspirational) cover by Duncan Long;  interior illustrations by Duncan and others.

If I am able to attend the convention, I will be concentrating on two tasks: 1. lining up other conventions for a distribution network:  2. lining up advertisers who wish to place ads in a publication that will be delivered directly to their target audience – readers of Science Fiction, Fantasy and Horror.  (Based on our survey of approximately 25% of regularly scheduled traditional conventions, there’s something close to 150,000 of you out there – not counting overlap – and we think that’s quite the market for people who are looking to sell books, comics, games, art, author services and the like.  We think its a pretty attractive market too, there’s a hefty core of influencers in there.

If you run a traditional convention and would like to pick up a nice premium offer for your attendees (starting in 2017), there’s no need to wait for Worldcon to get in touch.  Use the email at the end of this piece.

Likewise for advertisers;  there’s some room in this special edition for ads (delivered to every single member of Worldcon this year), but if you want to place something, you’ll need to get in touch sooner rather than later as we’re running up against our drop-dead-for-printing date.

I was hoping to spring this whole thing on Worldcon at Worldcon, but mice and plans, so there you go.

A gallery of the first covers by new owners/publishers of Amazing Stories from 1926 to the present:

Experimenter Publishing Company: 3 issues (to date) (April 2014 was both the 610th formal issue of the magazine and its 88th anniversary.)