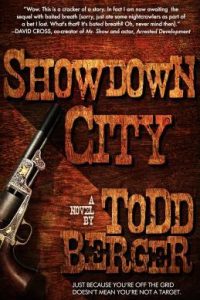 I love it when books surprise me, like Showdown City by Todd Berger. No offense to Todd, but I didn’t go into Showdown City with high expectations. Not because I thought Todd was a bad writer, but because I didn’t know much about him. In fact I am pretty sure this is Todd’s debut novel and, if that is the case, what a great way to make an entrance.

Showdown City begins when billionaire and Objectivist Ernie Swords gathering together helicopter pilot Huey Palmer, an Old West historian named Dr. Rainey and his research assistant, Valerie “Val” Trujillo. Ernie has been searching all his life for a rare handgun given to a 19th century French anarchist, Etienne Roux, who had disappeared with his followers while escaping west from the American government. He wanted to form a utopia where there were no laws and the people governed themselves.

Ernie believes he has found the location of Roux’s lost expedition in the deserts of Nevada, but things go awry when their helicopter is shot down. Suddenly our heroes find themselves in a lawless, Wild West-esque town named “New Roux City” ruled by the sadistic tyrant Miller Roux where all disputes are solved by a duel known as the “Showdown”. In a place where there is no government, our characters find alcoholic children, rampant inflation, polygamy, universal gun ownership and a bandit who steals everyone’s fine linens. When Huey showdowns Miller to save the life of Val, it becomes a race against time to save Huey’s life and maybe even save the people of New Roux City from themselves.

Showdown City is an intense and hilarious parody of Westerns that even points out the misconceptions we have regarding America’s westward expansion in the late 19th century. The characters are likable and have depth, plus the story has a few twists and turns on the way. The book even has a message: that any ideology can be hijacked as an excuse to give some people more power over others. In many ways Showdown City is a contrarian opinion to pro-libertarian books like The Probability Broach by L Neal Smith. Sometimes you need the rule of law to prevent people from using violence to get their way. Even if everyone has a gun, to paraphrase one of SM Stirling’s characters, a gun isn’t a magical wand, you have to be willing to use it.

That being said, I don’t mean to attack anyone who does subscribe to libertarianism or objectivism. Sometimes the government can be a hindrance, but its always good to be open minded. Only reading books that conform to your own personal opinions is not healthy. Thus if you have read Ayn Rand, you may want to read Upton Sinclair or Todd Berger as well

If I had one complaint about Showdown City, and even then it is more of back-handed compliment, its that the book was too short. I found myself putting the book down just so I wouldn’t finish it too soon. I really didn’t want this book to end. If you are going on a long trip and need to pass the time, Showdown City is the book for you, otherwise those looking for something that will take them a week or two to read will be disappointed…well, not really. This book is awesome, so if you are a disappointed, what the hell is wrong with you?

Anywho, go read Showdown City. Its funny, insightful and just an overall entertaining debut novel. Without spoiling anything, the ending is bit open-ended so maybe we will see what happens next to our characters in the future. Either way, I just hope I get a chance to read more from Todd.

Preview Review: Altered States of the Union – What America Could Be

The Starcrossed provides a hilarious, behind-the-scenes look at how a SF television series goes from promising to awful.

Scientists discover a “neural clock” deep inside the human brain