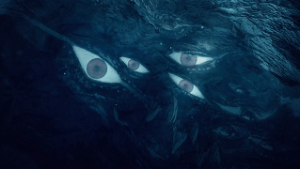 Kagewani -II- #11 – Having gotten at least a small expeditionary force into China somehow (I’m guessing enormous bribes were involved), the Sarugaku crew goes to check out the cave where the kagewani originated. Giving too much information to Kimura is suddenly the least of anyone’s problems, as they discover, in rapid succession: a swarm of kagewani; the woman from Yunnan, who turns out to be tougher and scarier than an entire cave full of shadow monsters; and an exceptionally large, exceptionally pissed-off kagewani which is totally done with politely dissolving when hit with the magic sound waves.

This kind of brings up the question as to how the kagewani has been propagating. We have seen back in season 1 that it can, somehow; one originally made it to Japan, and three were later seen in the same area. The unnamed woman being able to destroy the ones in the cave due to blood ties suggests that an extra kagewani can be spun off when someone is killed. Unfortunately, this would mean that she can’t do much about any further kagewani created by killing people outside of her clan.

All this is academic in the face (or whatever) of the super-kagewani, which seems resistant to the usual remedies. I wonder if that might be the one created from Homma being drowned in kagewani cells, in which case it’s got a particularly large and nasty body of knowledge about humans to draw from. 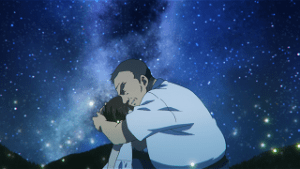 The Lost Village #11 – So the rules of the show are finally laid out: it’s not enough to be able to stand up to your fear or pain. You’ve got to hug it and tell it you love it and take it home with you. And for a few minutes, when the driver and Yottsun do exactly that, it feels like The Lost Village has finally gotten its act together. Those were a truly fine few minutes.

But back in the village, it’s still a whole lot of one-dimensional people yelling at each other and accomplishing nothing. Though it was fun to see Hellfire and Nyanta declaring they weren’t going to be roused out of their deadly torpor by a few flaming arrows because facts. I do kind of hope they make it, because they are still far and away the best couple in this show.

And meanwhile, Koharun is indeed delibrately making things worse to create a more extreme nanaki. You may have noticed that she doesn’t seem to have one, though since Masaki’s was able to act independently, maybe Koharun’s is hiding in plain sight too. Or maybe she’s someone else’s nanaki, and that’s why she only appeared when they were nearly at the village. Or maybe none of these, and the scriptwriter is going to pull another explanation out of nowhere.

I wonder where the driver’s gotten to? I would have guessed that a person who’s come to terms with their nanaki can’t re-enter the village, but Yottsun’s accepted his and is still there on the bus. 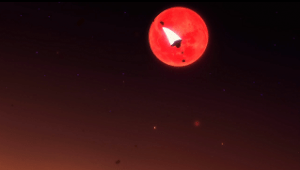 Re: ZERO -Starting Life In Another World- #11 – Rem’s martyr complex is explained with a look into her childhood with Ram and a moment of terrible guilt that has haunted her ever since. It does leave out one critical piece of information: how they wound up serving Roswaal. It’s implied that that happened soon after the attack. Perhaps the remaining attackers sold them to him, though seeing as they killed all the other oni children, it seems unlikely.

This has the unfortunate side effect of reminding us that we don’t know much about the actual protagonist of the story. The more competence Subaru is able to eke out, the more it’s a mystery how he wound up as a shut-in.

On the other hand, Roswaal’s last-minute reveal has done wonders for clearing up what’s actually going on. Finally we have someone with motives that could line up with the Jealous Witch’s, if that dragon is the same one that was involved in stopping the witch. The spell placed on Subaru by the witch is helping Emilia, which is helping Roswaal by keeping his candidate for the crown in play. And if there’s a deliberate alliance between Roswaal and the witch, it would make sense for him to be supporting a relative of the witch. (This is all assuming he isn’t actually the Jealous Witch in disguise himself. Hey, it’s a fantasy world and these things can happen.) 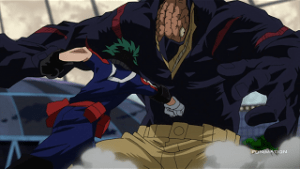 My Hero Academia #11 – Several of the UA students come to the same realization around the same time: that most of the attackers are a bunch of undistinguished thugs who are just there to distract them while a few true supervillains focus on All Might. Who of course still isn’t actually there, but his power is, and Izuku gets a nasty preview of what’s in store for his mentor. It’s entirely possible that Izuku was suddenly able to gain an unprecedented degree of control, but it’s also entirely possible that Giant Crow-Ape Dude has some way of neutralizing One For All.

Owing to the time dilation commonly produced by shōnen battle scenes, Īda takes most of an episode to unfreeze and get going, but get going he finally does. And so it looks like the badguys will have their battle with All Might just in the nick of time.

Except there’s no way I’m believing that All Might is there alone. He’s smart enough to know that the more heroes can show up to handle this, the better. And even if he weren’t, I can’t see the principal agreeing to let him go by himself. No, I expect some serious all-out superpowered smackdown next episode. 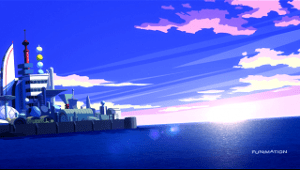 Concrete Revolutio #23 – In the fall of 1975, Master Ultima’s nefarious reign is abruptly ended. I guess he kind of was Richard Nixon. Actually, he looked like an even older version of Jaguar. Since Jaguar already exists in this period in three overlapping life stages, it’s not completely out of the question.

1975 was the year that Okinawa hosted a world’s fair. Its focus was on marine technologies, and the centerpiece was a floating city called Aquapolis. It was also a belated celebration of the US finally giving most of the island back to Japan in 1972.

In the Shinka timeline, Aquapolis is powered by captive superbeings, and that is the thing that finally makes Jirō give up on his idealism and declare war on humanity. He allies with Emi, even though he realizes that she played a part in manipulating him too, and is set to use the full force of his power for destruction.

This is the thing that Dr. Hitoyoshi seems to fear most. When he last speaks to Jirō, the one thing he emphasizes is that Jirō needs to keep his belief in heroes. He’s been carefully working to preserve that belief all along, because that is seemingly the force keeping the power of the atomic bomb in check. If Jirō lets go of it, then boom, and possibly a reversion to our timeline.