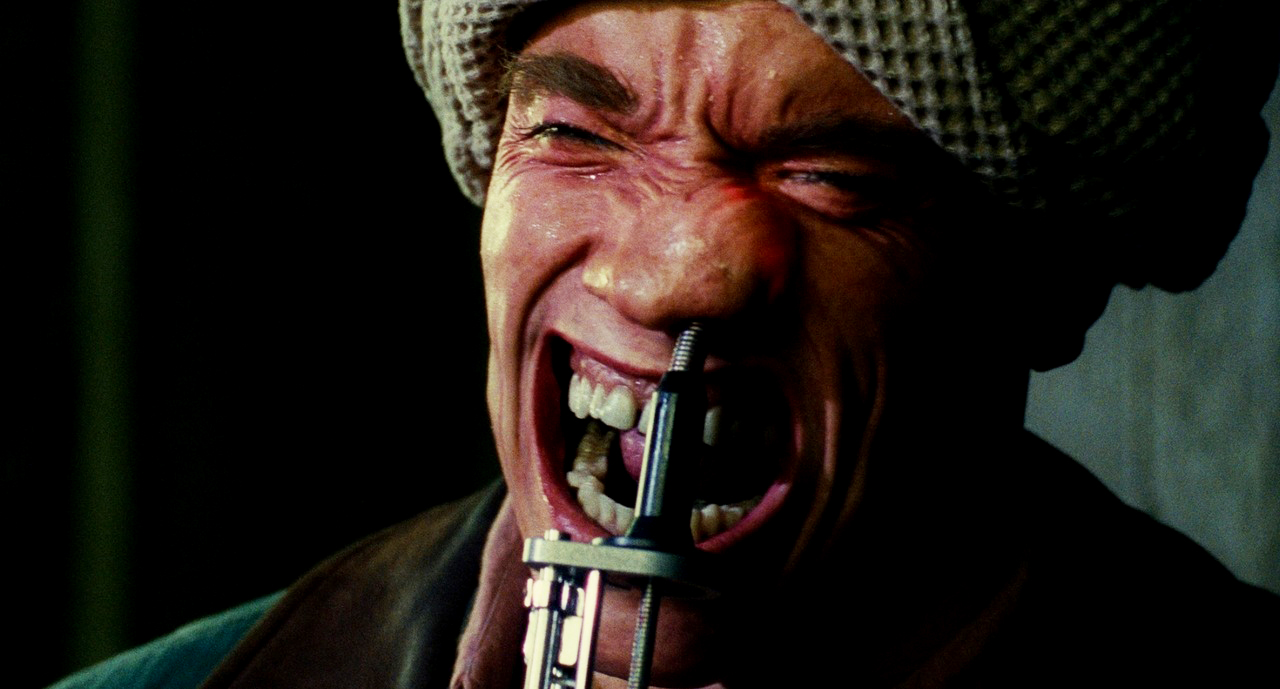 As invasive procedures go, the one that I endured this week was minor, but it was still uncomfortable. Plus it got me thinking about the whole concept of invasive procedures, that is, specifically, objects or creatures that go into or come out of human bodies, something that happens with a good degree of frequency in science fiction, particularly in science fiction films.

You see, what started this for me was a nosebleed. Now, normally nosebleeds are not tremendously traumatic events. The nose bleeds, you get some tissues, you put a cold cloth on the back of your neck and wait for the bleeding to stop, which should take five to ten minutes or so.

This wasn’t one of those.

This was a steady tapflow of blood. This was me sitting over the toilet, throwing sodden tissues down into the bowl. I’d had to flush three times and the bleed was showing no signs of stopping after half an hour when my wife called the ambulance. Got to the hospital. They clamped it but it was still bleeding after three hours. Nothing to do but pack it.

Packing a nose involves inserting what amounts to a big tampon into the nasal cavity. Foam is then soaked into the packing to expand it. Like a tampon, the packing has a string at the end which was taped to my cheek. The packing had to stay in for three days.

But that wasn’t the best part. Getting the packing out was even more fun. The string was there for a reason and the ER doctor basically had to pull it out. That was a very uncomfortable sensation. It felt like…

Well, remember Total Recall? Not the 2012 remake, but the 1990 original with Arnold Schwarzenegger? Remember the scene where his character, Quaid, has to extract the chip that was implanted in his head? Let’s have a look:

Yeah, it was that level of uncomfortable.

But that’s what got me thinking (although obsessing migh be a more apt term) about similar situations of invasive procedures. 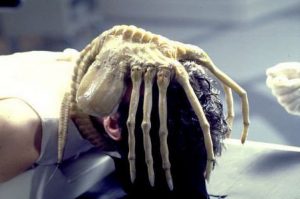 The one that usually comes to mind first is the original Alien. Everyone remembers the alien coming out, bursting out of the hapless John Hurt’s chest, but do you remember how it went in? No? That’s because they didn’t really show it, but the implication was that the facehugger alien grabs on to its victim and inserts a tube down its gullet. This, of course, implants the embryonic alien final form but also keeps the host alive for as long as the implantation to take effect.

Think about that. If you’ve eve been in the emergency room and they had to stick a tube down your throat? It’s like that, but only more alien and… icky. 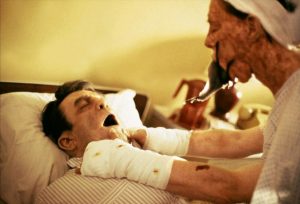 Most of these invasive procedures involve aliens creatures. Shows like Dark Skies (1996-97) had these alien creatures called ganglions which invaded the body through the mouth and/or the nose (or both) and was really really icky. A similiar creature was featured in the 1987 film The Hidden. In that film an alien parasite which looks like a giant black spider, possesses human bodies and takes them for a “joyride”. Once they are used up they swap to another body, but not before causing a lot of mayhem and chaos along the way. The scenes of the alien swapping bodies is truly stomach churning, particularly if you have a phobia about spiders. 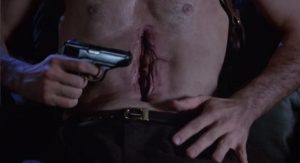 A good source of invasive procedures are the fiulms of David Cronenberg. The iconic and subversive Canadian director has a fascination with medical procedures and with objects invading bodies in a really not quite allright sort of way. Like the gun that is absorbed by James Wood’s stomach in 1983’s Videodrome, or the literal merging of Jeff Goldblum and musca domestica in 1986’s The Fly. In most of Cronenberg’s films feature some sort of melding of alien material or mechanical objects and human flesh. Not for the squeamish.

Well, there you go. After that brief foray into invasive procedures in the science fiction oeuvre, I feel a bit better about my own procedure. Maybe I’ll go out and get some lunch. Care to join me?

What? Lost your appetite? Gee, I wonder why?

Science Fiction and Fantasy just go together sometimes, and I feel like they’re the perfect vessels for conversations involving gender.

A good number of PhD physicists and astronomers,…are writing marvelous stories humanizing and extrapolating from our latest understanding of real science. Through such stories, science can become exciting and inviting

Oblivion: Yet Another Heady, Action-Fueled Science Fiction Epic Falls Short of Its Ambitions