Some might argue I am spoiling The Last Pilot, but it is important to talk about this because Johncock’s description of what parents go through when they lose a child is very realistic. 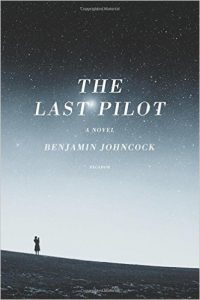 The Last Pilot is Benjamin Johncock’s debut novel and was sent to me to review for the Sidewise Awards for Alternate History. I can pretty much say with certainty that this is not an alternate history, but that doesn’t mean that you shouldn’t read it. Those who enjoy history, especially the early Space Race era, will find something that can drawn them in.

The Last Pilot follows Jim Harrison and his wife Grace. Jim is a test pilot who flies rocket planes out of the Mojave Desert. Him and Grace have been trying to conceive for sometime, but when a doctor makes it clear that having a family is impossible, they try to accept the fact that it will be just them for the rest of their lives…until Grace becomes pregnant. The couple who thought they couldn’t have a family now have a new baby girl, by the name of Florence. For two years they enjoy life as busy parents until tragedy strikes and they lose Florence to cancer.

Some might argue I am spoiling The Last Pilot, but it is important to talk about this because Johncock’s description of what parents go through when they lose a child is very realistic. I should know, it happened to me. Hell, I almost didn’t want to finish this book because how close it hit home. Jim and Grace went through a lot of the same things my wife and I went through. The grief, the depression, the arguments, the guilt, seeking out the help of a higher power, making a major change in your life just so you can feel you have some sort of control even though you are just running away from the pain…yeah its all there.

The latter is what Jim does when he signs up to be an astronaut, part of the “New Nine” who would be selected for the Gemini and Apollo programs. Maybe this is where the author/publisher thought the alternate history came in since there obviously wasn’t anyone named “Jim Harrison” in that group, but changing a name here or there isn’t enough to change history. What is more important is how Jim and Grace’s relationship begins to fall a part as Jim runs from his grief and Grace is left alone to deal with it. Soon Jim begins to break down as he tries and fails to keep it together. I won’t spoil how this is resolved (or if it is) you will just have to read the book to find out.

The Last Pilot is a good book. Besides portraying a grieving parent well, it is written in a literary style that reminds me of the works of Ian Sales, who also plays with the early Space Race history (and doesn’t use quotation marks for the dialogue). Plus I always like a book that teaches me something that I didn’t know. For example, I could have sworn the character, Pancho Barnes, was made up, but it turns out she is real as you and me. Even if you don’t read this book, go look up more on Pancho. I promise you will be impressed.

If I had one nitpick I thought Florence, Jim and Grace’s child, was a little unbelievable. I mean she acted like any child would who was maybe four or five years old, but the book makes it clear she was only two. My wife, a child development teacher who works with preschoolers, says she was speaking at a level that was way too advance for someone her age. Still its a minor nitpick and one many would probably not even notice while reading the book.

The Last Pilot isn’t an alternate history, but it is still worth a read. It is immersed in the history and culture of test pilots and astronauts, but more importantly, it understands the pain a parent goes through when they lose a child. It may not be a book many in the SF&F community would consider picking up, but I can still recommend it.

Science Fiction After a Fashion

Does Macy’s tell Gimbels? This week a review of the upcoming “Very Best of Fantasy & Science Fiction Vol. 2”

Frogs in Aspic Keith P. Graham Kindle only $1.99 I’m partial to short fiction, especially lately when I have so many interruptions it seems to take forever to finish a novel. So when a collection comes my way that contains numerous short stories, I’m a happy guy. (Come to think of it, I’ve not reviewed […]