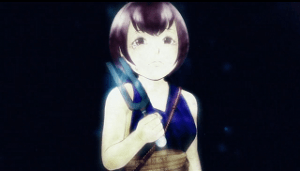 Kagewani -II- #8 – As explained last season, the kagewani was created as a means to end a long-running feud between two villages. Which it did, of course, by killing practically everyone. The only survivor was the woman who tracked the kagewani for the rest of her life and finally died saving Bamba’s life for the (at least) second time a few episodes ago. But it seems there was in fact a survivor from the other village as well.

Though no exact year has ever been given, this all seems to have happened about 60 years ago, which makes it just possible that the little girl who survived is the same woman who nearly killed Bamba. And now Bamba is carrying around the memories of her father, which is going to make for one weird and awkward reunion.

Some linkage between humans and monsters has been established before; in one very early episode, the monsters of the week were explicitly established to be mutated humans. There was one shot of the basilisk a couple weeks ago that showed it had the sort of human-face markings also seen on those monsters. And now we have the kagewani able to share a human body, and memories of other humans being preserved in it (a neat trick given that it was burned to ash and scattered on the winds 50-some years ago, and only recently reconstituted at Sarugaku), and… and… okay, I’m not sure where this is going yet. Nowhere good, I’m sure.

At least Bamba is back and ready to keep fighting, although I expect he will soon regret his last action this episode, and I don’t just mean because sitting up that fast three days after taking a serious wound to the back has got to hurt like hell. Kimura is almost the worst possible person he could be blurting out clues to. Let’s just hope there’s no surveillance sound recording that Homma can get hold of. 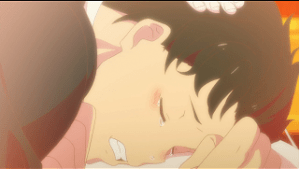 Re: ZERO -Starting Life In Another World- #8 – In literally any other light novel adaptation ever, the male protagonist getting to lay his head in a girl’s lap, even at a time of great stress or sadness, would be an occasion for putting on the wacky music and focusing on him thinking, “OMG! My head is very close to some ladyparts! And I can see boobs from an unusual angle!” And then he would say something stupid and get kicked into the wall. And then another girl would misinterpret his explanation of the incident and he would be comically kicked into the wall again. And then… well, anyway.

Even though Subaru getting to lay his head in Emilia’s lap may have been a bit corny and forced in the way it came about, it was a joy and a relief to see it played as though Subaru really is at the end of his emotional strength. He can’t tell her about everything he’s been through, but his mental state is communicating itself clearly enough that she responds to it.

Which is why I think Emilia probably isn’t the Jealous Witch, who is said not tobe able to feel love, though I’d still bet on Emilia being a relative to her. And it does explain why Emilia pointing out that she’s a half-elf, back at the very first time they met, was supposed to make it obvious why people wouldn’t chose to try to befriend her.

Speaking of the Jealous Witch, did Beatrice say a dragon was involved in sealing her away? Could it be the same dragon that the kingdom has an agreement with? 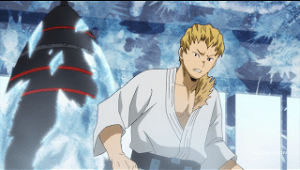 My Hero Academia #8 – Just in case you’ve forgotten over the last few episodes that the author is a huge Star Wars fan, here’s a student who aspires to be Luke Skywalker in A New Hope.

Katsuki is now facing a serious ego crisis. Not only does Izuku have the potential to defeat him, there’s another student with massive power and the ability to make winning look easy. For the first time in his life, he’s confronting the possibility that he is not the awesomest awesome ever. So the competitive spirit is kindled… although less in a “may the best man win” sense, more a sense of outrage that his assumed place at the top of the heap is being taken from him.

All this is fairly standard, if well-executed, shōnen material. One thing that isn’t standard is the parallel focus on All Might as he grapples with learning how to be a mentor. It may just be a bridge to the introduction of the supervillains taking advantage of his semi-retirement, but it’s a nice touch all the same. 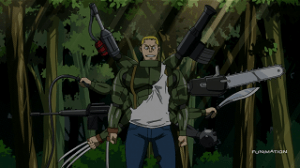 Concrete Revolutio #20 – Just as the data accumulated by the Ishī network of torture and mutilation found its way to the US Army’s biowarfare unit in our timeline, so the work of Ikuta Labs is being carried on by the US in Concrete Revolutio‘s alternate history. The franchise being borrowed this week is G.I. Joe, a US toy line which in its best-known form is a military team. (Except for that one guy who’s basically Wolverine. Hang on, isn’t Wolverine Canadian?)

In this version, the elite soldiers are being deployed for a very literal form of erasure– cultural imperialism by means of destroying the manifestations of native folklore. Like the American toys, movies, and music flooding into Japan in the 1960s and 1970s, the soldiers are serving a juggernaut that seems like it can turn the whole world into a monoculture.

I wonder if that means that Master Ultima is the Shinka Era’s equivalent to Richard Nixon.

I also wonder where the story is going. Since fitting together all the pieces from the first season, it’s just been meandering. With only a few episodes to go, there should be some kind of sense that a resolution is on the horizon, but there isn’t. 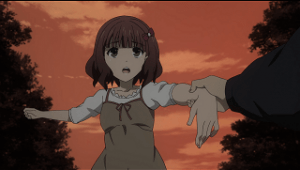 The Lost Village #8 – All right, all right, so she is Masaki Aida. In my defense, they clearly said last episode that she was 16 when she vanished, and Masaki is 16 now, so that couldn’t have been her unless she was a ghost, but now we see that she was younger when she first came to Nanaki.

I’m not giving up on the bus driver being the main character, though. And neither is the show! After a couple of episodes sitting quietly in the background, he’s somehow gotten the bus up the impossible road to the village (I suspect supernatural intervention) while completely missing out on Masaki’s explanation that she has no spiritual powers.

Meanwhile, people argue. A lot. Making the same points over again in case you missed them last week, or the week before. I’m starting to root for people to die just to cut down on the clutter. I’d like to see more of the low-drama faction starting to coalesce around Detective Nanko, who has, true to her name, started figuring stuff out.

And further meanwhile, it seems that Hyōketsu no Judgeness (Judgement That Freezes, approximately) is, like Jack, still alive and roaming the forest. Maybe no one ever really dies in Nanaki, they just become more phantoms lurking in the woods or they find a way to escape.