Tarzan, ERB’s most popular character, has gotten the film treatment since 1918; a handful of portrayals have stood out as true to the character. Will Skarsgard’s live up to the legacy? The long-awaited “The Legend of Tarzan,” the latest film about Edgar Rice Burroughs Lord of the Jungle, will open in theaters this July. The multi-million dollar, CGI-special effects-laden extravaganza starring Alexander Skarsgard is getting good press so far. After preview trailers were released, even die-hard fans are saying it looks like Hollywood may finally have done justice to Burroughs’ creation. It’s been a pet peeve of the fans that the movies have always presented a dumbed-down version of the ape-man, compared to the character in the novels. They’re hoping that for the first time they may get to see the “real” Tarzan on screen. It’s a consummation devoutly to be wished, but the fact is, if “Legend” lives up to expectations, it wouldn’t really be the first time that a Tarzan movie got it right. There have been several films made over the years that have come pretty close.

There have been about 40 Tarzan features all together, going back to the silent era with Elmo Lincoln wearing a leopard skin rug in the swamps of Louisiana in “Tarzan of the Apes” (1918).  The best known and revered Tarzan films are the 12 movies Johnny Weissmuller made at MGM and RKO between 1932 and 1948, starting with “Tarzan the Ape Man,” and ending with “Tarzan and the Mermaids.” The average moviegoer considers the Weissmuller films to be the definitive Tarzan, but the truth is they never came close to portraying Tarzan as he is in the novels. 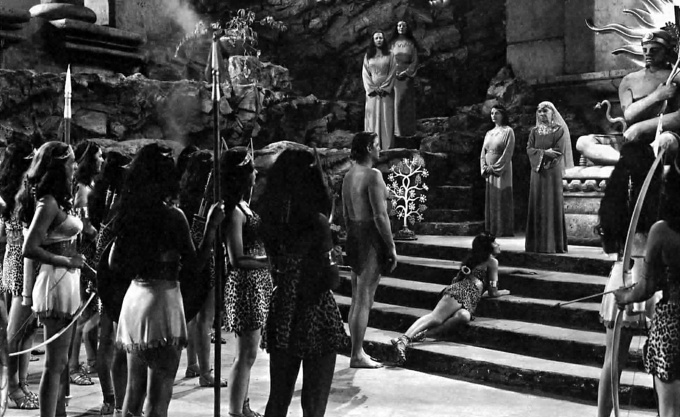 Burroughs’ Tarzan is a man who was raised in the jungle as a child by apes and who in his early twenties was brought to England to claim his rightful place as the son of a British lord. He is both savage and nobleman, primitive and educated. He speaks several languages. He’s strong and he believes in his own version of the law of the jungle–only the strong survive and the weak are to be protected. In contrast, all of the Weissmuller films portray him as a monosyllabic jungle man who knows nothing of the outside word, except that guns are bad, and white man brings trouble. He communicates easily with his animal companions but the best he can do  with humans is: “Me Tarzan, you Jane.” As enjoyable as these movies are, they’re a far cry from the character in the books.

To find the first “authentic” Tarzan film you have to go back to 1935. While Weissmuller was swinging through the studio back lots at MGM, Burroughs, not happy with the way his

character was being portrayed, decided to make his own Tarzan movie. “The New Adventures of Tarzan,” (1935), starring Olympic shot put star Herman Brix (Bruce Bennett) is the only Tarzan movie that can boast having Burroughs himself involved in the writing and production. Brix fit the part well. His tall, slender, but muscular physique, came closest to the illustrations of Tarzan by J. Allen St. John that appeared in the novels. He  was approved for the part by Burroughs, who was on location with the cast and crew in the jungles of Guatemala.

As a 12 chapter serial, it runs well over four hours and contains some good action sequences, with Brix giving a spooky rendition of Tarzan’s blood curdling ape-call. Brix looked as much at home on the lawn of the Greystoke estate, as he did swinging through the trees in Chichicastenango. The story revolves around the Green Goddess, a statue that contained a fortune in jewels as well as a secret formula for an explosive that could destroy the word. The serial was meant to be seen in installments on a weekly basis, so watching it over four hours on DVD can be somewhat arduous. The crude film making techniques of the time may also be off-putting for today’s audience. But despite those shortcomings, “The New Adventures of Tarzan” at least presents Burroughs concept of the character pretty much intact. A shorter feature film-length version entitled “Tarzan and the Green Goddess” is also available.

It would be more than 20 years before the next “real” Tarzan would show up. After Weissmuller retired his loin cloth, Lex Barker took over the role at RKO and made five Tarzans through the early 1950s. But producer Sol Lesser followed the Weissmuller template. They were good jungle action movies, although by this time the films were being aimed more at the Saturday matinee kid’s audience. Barker quit Tarzan in 1953 and went to Europe to make movies.Lesser next hired Gordon Scott, a Las Vegas hotel lifeguard, to take over the role.

Scott’s Tarzan career got off to a weak start with a low budget, black and white jungle epic called “Tarzan’s Hidden Jungle.” It was filmed on studio back lots and had a less than spectacular story line that had Tarzan mostly calling all the jungle animals across a river where they would be protected from hunters. The next feature, “Tarzan and the Lost

Safari” opened things up a bit by including some African location filming. Much was shot in the Elstree Studio in the U.K, but some of the outdoor scenes were filmed in Kenya, and near Mt. Kilamanjaro. It was notable for being the first Tarzan movie in color. This was followed by “Tarzan and the Trappers”  and “Tarzan’s Fight for Life” a campy effort that kept Scott stuck in the Weissmuller mold.

But then in 1959 things changed. Sy Weintraub took over as producer of the series and he made it his goal to bring Tarzan closer to the character in the  books. “Tarzan’s Greatest Adventure,” (1959) the first of his productions, is a great effort in that direction and one which some fans think may be the best Tarzan film ever made. It was shot entirely on location in Kikuyu, Kenya. Tarzan speaks perfect English, is intelligent, educated, and nobody to mess with. The script by Berne Geller and John Guillerman (who also directed) is top notch. A doctor friend of Tarzan is killed by four men stealing explosives to use in a diamond mine. The leader of the men, Slade (Anthony Quayle), is a psycho killer that Tarzan had sent to prison once before. The ape-man’s pursuit of Slade and his gang becomes a personal vendetta. Of course, Slade knows Tarzan will come after him, and that’s just what he’s waiting for.

Aside from the location shooting, and tight story, there’s an excellent  British cast that also includes Sara Shane, and in one of his earliest parts, a 29-year old Sean Connery as an Irish gunman named O’Bannion. It’s fun watching the future 007 being stalked by the Lord of the Jungle. Connery delivers a great line after Tarzan fires an arrow at him. “A bow and arrow! How about this guy!”

Almost as good as “Greatest Adventure” is “Tarzan the Magnificent,” which features veteran stuntman and TV cowboy star Jock Mahoney as Coy  Banton. This one, again shot in color on location, features Scott and Mahoney going all out with some dangerous looking rough and tumble stunts on a rocky cliff by a waterfall. Robert Day directed with a firm grip on the proceedings, delivering a taut, edge-of-the seat film.

Scott ended his Tarzan days  with “Tarzan the Magnificent” and went to Europe to make a number of sword and sandal epics in Italy. His life ended in a strange way. He became wheel-chair bound in his old age and wound up living in the basement of one of his fans in Baltimore, Md. He died in 2007 at age 80.

The attempts at presenting a “realistic” version of the Lord of the Jungle continued under Weintraub’s supervision, when he cast Jock Mahoney in “Tarzan Goes to India” and “Tarzan’s Three Challenges.” Mahoney had the physique and athletic prowess to do his own stunt work, despite being 43 years old at the time. These two films are the first wide-screen Tarzan films shot in Panavision and are worthy, colorful additions to the Tarzan filmography. Mahoney played him, as Scott had before him, as a cultured man who simply preferred nature to civilization, and had the ability to survive in both worlds. Unfortunately, Mahoney had trouble surviving the location shooting in Thailand. He contracted dengue fever and dysentery, lost 40 pounds, yet somehow managed to finish the movie.

Tarzan went through a number of reincarnations after Mahoney, including a TV series with Ron Ely, another well-spoken Tarzan, who got into adventures on a weekly basis, with guest stars like Tammy Grimes, Julie Harris, Maurice Evans, and Ethel Merman. It was a fun show that ran for three years on NBC. Weintraub next cast former L A Rams star Mike Henry as Tarzan in “Tarzan and the Valley of Gold.” It was an attempt to modernize Tarzan along the lines of James Bond. It’s a good action flick, but too far from the original character. Subsequent films, including “Tarzan and the Lost City,” with Casper Van Dien, and “Greystoke,” with Christopher Lambert, and Bo Derek’s “Tarzan the Ape Man,” remake were all interesting tries, but never aroused much enthusiasm among fans or at the box office.

And now comes the “The Legend of Tarzan” with Alexander Skarsgard. True fans eagerly await. Will this be the one? It’s like that moment on that old TV show from the fifties when the announcer would say: “Will the real Tarzan please stand up?”

Book Review: The Ear, The Eye and The Arm by Nancy Farmer

John M. Whalen is the author of Vampire Siege at Rio Muerto, a horror western novel published by Flying W Press. His science fiction, sword and sorcery and horror short stories have appeared in numerous publications and anthologies.

This week, Steve gets double vision as he reviews the two versions of the movie “Flatliners.” The first one was an examination of the possibility of an afterlife from a medical standpoint; the second one was sort of a horror movie.

Are Modern Twists on Classics the Future?