Swords of Steel II stands up to the success of the first volume and proves once again that stories can be just as artistic in prose as they are in tone. 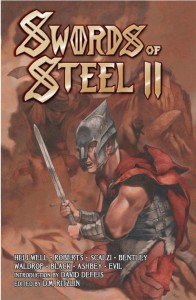 The crowd is standing, cheering, and the literary artists have answered fandom with a well-earned encore. Fresh from DMR Books comes Swords of Steel II, another brilliant anthology edited by D.M. Ritzlin. Like the first installment, Swords of Steel (reviewed here), this collection also embraces the fine art of traditional fantasy storytelling by capturing the dark realms of fantasy and painting the heroes and villains who walk them.  Also in the same mold as the original, some returning names and some of them are new, most of the contributions come from members of the heavy metal community including musicians and song writers.

Following the book’s introduction Where the Lifestream Touches Eternity by David DeFeis, the eleven works found in Swords of Steel II are:

The Forgotten City of Tehm by Ernest Cunningham Hellwell is a story reminiscent of the classic fable where a forgotten hero outcast of long ago returns and restores his honor in an epic battle against evil men and beasts.

A Voyage on Benighted Seas by Byron A. Roberts follows the cursed Captain Caleb Blackthorne as he sails his battle ready ship Starfire, becoming both predator and prey, facing his darkest nightmares. This is the second chapter of an ongoing saga that began in the first Swords of Steel.

That Then Which There Can Be No More Terrible by Michael Scalzi looks closely at the lecturing points of philosophy professor Dr. Dendrite. Presented in the form of an essay, the ideals are both disputed and defended, and sometimes surprising as one student decides to take a stand and question their instructor’s theories.

The Sword of Shaitan by Howie K. Bentley is a poem about the macabre world between the living and the dead. The lyrical tone of poetry makes these entries ideal works for this type of collection.

Mystery Believer by Scott Waldrop is a ghost story proving “that a song is nothing more than three chords and the truth.” It is a stranger’s tale of life growing up amongst the dead where readers learn that the living are the uninvited guests.

At the Crossroads: Swords, Sorcery, and Heavy Metal is an essay by David C. Smith that first appeared in the 2014 French publication of Metal & Fantasy Vol 1 from Camion Blanc (edited by Frantz-E. Petiteau). With well-defined cited works of worthy music in the genre, the author reaffirms the symbiotic ties between swords, sorcery, and heavy metal.

Beneath Dead Lake by Jeffrey Black is a cat-and-mouse adventure with two differing species working together as they are chased through a labyrinth of cracks and crevices beneath a dried up lakebed.

Red Ochure by James Ashbey looks at the artistic imagery of ancient burial practices and how the mere study of the craft can drive one man to madness.

Vitiated Life by Alex A. Avdeev is a poem about the sad decaying legacy of a once proud Viking who did not receive an honorable death.

Darke Manor by Jaron Evil is a horror tale, taking place within the walls of a haunted mansion with Escher like trappings and the dangerous allure the horrors of the unknown.

The Heart of the Betrayer by Howie K. Bentley took the fantasy trope of witchery and magic potions familiar to Disney stories and ratcheted it up with dark treachery and remorse in this novella more fitting for this collection.

It should be noted that along with words, this book also has some intriguing black and white illustrated artwork from Eva Flora Glackman-Bapst, Martin Hanford, Scott Waldrop (Wow! He can do words AND art!), Eric Rot, and Jesus Rodriguez.

The one hurdle this book faces has nothing to do with the imaginative works within the collection, but in the physical publication of the print copy reviewed here. Unlike the preceding first volume which uses a similar font, this time around the uncomfortably small print makes reading very difficult. It is appreciated that so much can be packed into this 6.5” x 4.25” pocket sized volume, but perhaps expanding on the 182-page count may make room for a larger text size. Hopefully this will be addressed in future printings because the contents of the stories are far too valuable to be dismissed because they cannot be easily read.

Music often tells a story. So when you pull together a group of talented musicians who enjoy spinning a tale or two, you’re bound to discover that some stories can be just as artistic in prose as they are in tone. Edited by D.M. Ritzlin, the stories in Swords of Steel II stands up to the success of the first volume and is sure to be a hit for returning fans as well as those picking it up for the first time.

Harry Potter and the Cursed Child can be enjoyed as a non-canon Harry Potter story unconnected to the previous tale.

Sometimes, the biggest difference between mystery and horror is the authenticity of the monster. Horse of a Different Color by John L. Lansdale satisfies both.