A YA adventure with sentient trains! 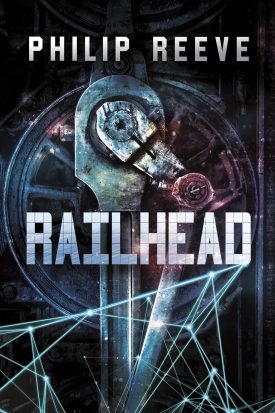 Zen Starling, a railhead (lover of riding the rails), lives with his sister, Myka, and their mother on the planet Cleave. Myka works in the factories on Cleave, and Zen works as a thief—everywhere. Zen’s mother moves the family every couple of years, afraid of the mysterious people that she worries are following them. Zen and Myka, as they’ve grown older, have come to believe their family’s stalkers are all in Ma’s imagination.

The story begins as Zen steals a necklace from a vendor in Ambersai’s Bazar. As he runs away, he’s accosted by a girl in a red raincoat, who says she wants to help him escape. He declines her assistance; all he wants to do is hop onto the train at the K-bahn station and travel back home to Cleave without being arrested. When he gets to Cleave, he sells the necklace to Uncle Bugs, a Hive Monk composed of a colony of bugs that take the shape of a human. But a drone then destroys Uncle Bugs, and Zen must go on the run.

When the military catches up with him he is forced to accept help from the girl in the red raincoat, who turns out to be a Motorik, an android, named Nova. Nova takes him to meet Raven, who hires him to pose as a relative of the Emperor. His job will be to board the Emperor’s train and fool the royal family into believing he is one of them, in order to complete his mission of stealing a little box on the train. The box looks harmless, but is it? Why is it so important to Raven? Along the way, Zen learns who he can trust, and who he can’t. Can he trust Raven’s Motorik, Nova? He has a strong dislike of androids ever since the Moto Wars.

Sentient trains are major characters in this sci-fi novel, and I love that aspect because I can connect with their passion – they fall in love, for example. They enjoy having beautiful pictures painted on their exteriors by Flex, Myka’s friend, a master painter.

Zen’s and Flex’s love for trains comes through strongly and endearingly. Philip Reeve skillfully creates characters that a reader will love or hate along the journey. I greatly enjoyed this novel, appropriate for young adults and up.

It was August 29, 2334, three hundred years after the meteorite slammed into Earth and decimated the planet and the population.

Win Giraffes On Horseback with our latest book competition

The Mediums of Jurassic Park