Ted Hughes original tale is worth the read.

The Iron Giant by famed English poet Ted Hughes is one of those rare books that did not appear on my radar until long AFTER the movie version was produced. More often than not, when I go back and learn about any literary piece that might have influenced a theatrical release, the original work stands out for obvious reasons and the true value comes to light. Not so here. Well, at least they both have robots. Unfortunately, that’ about all they have in common.

The Iron Giant animated film hit theaters in the summer of 1999 and quickly became a regular addition to our family rotation when the home version was released later that year. It’s the kind of movie that all ages will enjoy over and over. The key members of the cast were voiced by , Harry Connick, Jr, and Vin Diesel, though the latter is limited to rough grunts and very few words, not unlike his role as Groot in Guardians of the Galaxy. The screenplay was written by Tim McCanlies, with minimal similarities to the original Hughes story. 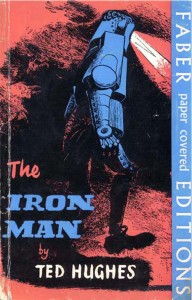 First published in the UK by Faber and Faber in 1968, the book was originally titled The Iron Man, A Story in Five Nights. And no, this is NOT the Iron Man from Marvel Comics fame. Though the title and cover images have varied over the years, The Iron Giant title is the best way to separate the story from those other super hero adventures.

It is believed that Hughes wrote his story for his children, which explains the simple fable-like plot, obviously written for early readers. The imagery is quick and precise, perhaps to assure holding a child’s attention while keeping the story’s action moving along, a common element of some children’s writers.

In the story, an iron robot falls from the sky and crashes to the ground. Discovered by two boys, they run home and tell their parents. Leading their father back to the crash site, they begin to explore the damaged remains when one of the boys becomes trapped inside the thing just as it begins to rise. After a long chase, the boy escapes and then the giant is eventually trapped in a pit by the townspeople who quickly bury it, thinking their problems are solved.

The giant escapes, but the people discover that they can simply keep it at bay by letting it feast at the local junkyard. This calm is short lived as a giant dragon hurtles from the stars, crashing to earth. But unlike the metal man, this monster begins to destroy the land. After some trickery by the robot, the two giants do battle and the Iron Giant saves the world.

The book is enhanced visually by an occasional penciled sketch by illustrator and cartoonist George Adamson. Though the images were true to the story, they seemed a bit old-fashioned even for the sixties, merely complimentary and perhaps moot due to Hughes’ simplistic descriptions.

The plot is very dated considering the date of publication as well, both in content and in writing style. Most of the characters are one dimensional and stereotypical to a fault. The villagers are narrow minded and fearful, typical of many of the old fables most of us has read and loathed over time. In fact, the entire story has the feel of an old fable, including a magical dragon from the sky and the typical “moral-of-the-story” as the townspeople quickly discover that the one thing that can save them is the one thing that they fear the most. 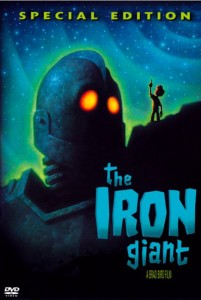 The film version also titled The Iron Giant has a lot more content and the moral message goes much deeper than just people overcoming their fears of that which they know nothing about. Set in the cold war era, the story takes a twist on the public’s fear under the watchful eye of Sputnik. As the government searches for the fallen entity, a small boy hides the giant and they become friends. But the government is intent on capturing and studying the giant for fear it is a product of the enemy of the time. The evil antagonist is not a magic dragon. No, the villain is in fact, man.

Thanks to some visual humor along with allowing the characters to gradually grow as the story unwinds, the story becomes more plausible and helps viewers get a better grasp on the emotional turmoil brought on by the political and military tension. 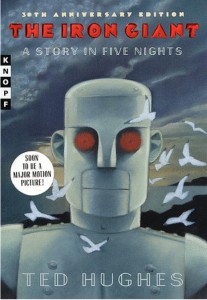 Children’s books have sure come a long way in fifty years. If you get a chance to read the original story by Ted Hughes, The Iron Man, A Story in Five Nights, by all means do so. It helps not to compare it to the film counterpart, but rather enjoy it for the nostalgia and the “classic” fable form that it represents. Then go sit down and watch the film, because it’ll make you laugh, smile and maybe even be a kid again. And with any luck, maybe, just maybe, somebody will take it a step further and produce a live-action film version. Because, you know…it’s about robots

(Editor’s note:  the animated version of this story may be viewable here.).

Perhaps it has something to do with the fact that I recently signed myself up for a Horticulture Certificate with the Open Polytech, and have been assiduously studying the physical and chemical properties of soils all week – all in the service of surviving this largely unremunerated artist’s life I lead: I’m feeling all earthy […]

From the – We ARE Living In A Science Fiction World – Department

Voices in AI – Episode 76: A Conversation with Rudy Rucker – Gigaom

Review: Blade of the Destroyer by Andy Peloquin