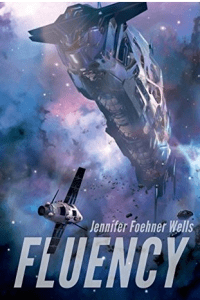 Let me remind you that the one unbreakable rule of the romance genre itself is that there must be a  Happily Ever After (HEA) or at the very least a Happy For Now (HFN) ending to the book. Not just the series but contained in each book. No, you won’t find this rule written down on stone tablets anywhere but try publishing a book, calling it a romance and not meeting this requirement. Do you like one star reviews? The readers in the well-established, very successful romance world expect that HEA or HFN and if they don’t get it, they can be extremely unhappy. Part of why people read romances is to get to that satisfying, lovely ending.

In science fiction, all bets are off. The ending can be any way the author wants – blow up the universe, part the lovers forever, the aliens win, the aliens don’t win…if the story is told well, has good SF elements and solid world building, then the readers will most likely be happy. I’ll be happy, for one. Sure I relish romance and/or romantic elements (or will find them even if they don’t explicitly exist – Hicks and Ripley anyone?), but in a science fiction novel I’m not expecting them necessarily. I read to the end, close the book, nod and say, “OK that was great. Hope there’s a sequel some day.” Even if there was no romance at all.

I think science fiction romance readers are a bit more willing to like a novel and go along with a failure to give us the HEA or HFN in one book, if we feel pretty sure the overall series arc will get us there. Some of us (well me) might be grumpy, but we’re not talking the dreaded Did Not Finish (DNF) or low stars. But please, don’t market the book as romance.

Let me illustrate with two fairly recent books. (And I may give spoilers so if you haven’t read them, read on at your peril.) First is Fluency by Jennifer Foehner Wells. Here’s the blurb:

NASA discovered the alien ship lurking in the asteroid belt in the 1960s. They kept the Target under intense surveillance for decades, letting the public believe they were exploring the solar system, while they worked feverishly to refine the technology needed to reach it.

The ship itself remained silent, drifting.

Dr. Jane Holloway is content documenting nearly-extinct languages and had never contemplated becoming an astronaut. But when NASA recruits her to join a team of military scientists for an expedition to the Target, it’s an adventure she can’t refuse.

The ship isn’t vacant, as they presumed.

A disembodied voice rumbles inside Jane’s head, “You are home.”

Jane fights the growing doubts of her colleagues as she attempts to decipher what the alien wants from her. As the derelict ship devolves into chaos and the crew gets cut off from their escape route, Jane must decide if she can trust the alien’s help to survive.

I loved this book. I particularly enjoyed the Ei’Brai, a very cool alien intelligence. The science fiction elements were solid and intriguing. I relished the developing relationship between Dr. Jane Holloway and Dr. Alan Bergen. Although the Ei’Brai was a mite jealous. But then, close to the end of the book, Jane consciously steps away from romantic possibilities with Alan. I was disappointed but the book wasn’t billed as a romance so I was ok with it. And you could reasonably see that in a future book Jane and Alan were probably going to get together again. So maybe the series itself will have a good arc for these two.

Will I read the next book in the series? Bring it on! Remanence, just out, already sitting on my kindle.

This book is listed in Science Fiction Space Exploration and First Contact type categories at ebook retailers. Not as a romance. Hold that thought. 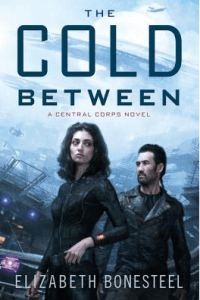 Contrast that with The Cold Between: A Central Corps Novel by  Elizabeth Bonesteel. Here’s the blurb:

Deep in the stars, a young officer and her lover are plunged into a murder mystery and a deadly conspiracy in this first entry in a stellar military science-fiction series in the tradition of Lois McMaster Bujold.

When her crewmate, Danny, is murdered on the colony of Volhynia, Central Corps chief engineer, Commander Elena Shaw, is shocked to learn the main suspect is her lover, Treiko Zajec. She knows Trey is innocent—he was with her when Danny was killed. So who is the real killer and why are the cops framing an innocent man?

Retracing Danny’s last hours, they discover that his death may be tied to a mystery from the past: the explosion of a Central Corps starship at a wormhole near Volhynia. For twenty-five years, the Central Gov has been lying about the tragedy, even willing to go to war with the outlaw PSI to protect their secrets.

With the authorities closing in, Elena and Trey head to the wormhole, certain they’ll find answers on the other side. But the truth that awaits them is far more terrifying than they ever imagined . . . a conspiracy deep within Central Gov that threatens all of human civilization throughout the inhabited reaches of the galaxy—and beyond.

Again, good science fiction world building and elements, although I found parts of the plot presented in a confusing manner. I loved the hero, Treiko. He was intriguing and cool. I could take or leave Elena frankly, but together they were great. I was definitely kept engaged, mostly by their interactions, and went on turning the pages to see how it all turned out – both the underlying science fiction challenges and the romance.

The book doesn’t have an HEA or HFN. Elena and Treiko are not together at the end. There’s no indication there ever will be any more between them. He’s back on his home planet and she’s flying across the galaxy in her ship. Life back to normal.  If I had to guess, I’m betting Elena will get together next with a starship captain who’s also in this novel. He’s significantly younger than Treiko and much more Elena’s contemporary. Her real love, however, is her job and her ship. Make no mistake there!

So why was I unhappy when I finished Cold Between? (Raises hand.) Romance reader here. The book was marketed by the publisher as a romance. Do not tell me something is a romance and then fail to provide the HEA or HFN ending. It is also categorized as Hard Science Fiction at ebook retailers and I have no quibble with that designation. Definitely hard science fiction at work here so listing the book in those categories is perfect.

It’s a matter of the expectations the author or publisher creates within the reader and therefore the way a reader approaches the book. Will I be reading the next book in this series? No. I’m not going to invest in a romance for an entire book that then gets summarily shut down before the end and the heroine ostensibly moves on to someone else. The science fiction elements of this universe didn’t grab me enough to make me want to disregard my annoyance over the romance and read more stories in the Central Corps world.

Your mileage may vary. Many in the SFR world enjoyed this book and enthusiastically reviewed it. Each reader has their own experience with a novel for sure. I can only tell you mine.

In Fluency, we’re left with the strong probability the couple will have more adventures together and possibly find their happy ending at some point. In Cold Between the couple we spent the entire book caring about is done and the heroine has moved on, with another guy in the wings.

Which one got billed by its publisher as a romance?  Oh right….Cold Between.

I loved “Star Trek.” I had no problem with the fact that Captain Kirk would love ‘em and leave ‘em, usually in under an hour due to commercials. I was there on the Enterprise for the science fiction, not the romance. My expectations were met. (I had a thing for Spock anyway. Move over Nurse Chapel!)

There’s no right and no wrong answer. Every reader decides for themselves each time they read a book.

So there you have it and I wish you happy reading, whatever your requirements for romance mixed with science fiction may be! Lively discussion is always a good thing.

(I purchased a copy of Fluency and received an Advance Review Copy of The Cold Between earlier this year from the publisher.)

Discussion of some of their favourite science fiction romance series by authors and fans.