There are times when I am embarrassed to be human. This occurs most often in leap years, which also happen to coincide with American Presidential elections. It is just our bad luck that such years are one day longer than the others, thereby extending the insufferable by an additional 24 hours. The fallacious garbage that pours forth from the candidates’ mouths, their surrogates and the media reach such a paranoid pitch that I must seek solace in political satire or risk losing hope.

In order to give perspective on what motivated William Tenn (pseudonym for Philip Klass) to write “Brooklyn Project,” I am going to describe the political atmosphere at the time, but you won’t need it to enjoy the story.

The year is 1947, two years removed from the Manhattan Project that gave us the detonation of the first atomic bomb. World War II is over and the Cold War is starting to warm up. The Soviets are busy infiltrating the US with spies who will eventually help them develop their own bomb in 1949.

Distrust of communists and fear of Soviet infiltration lend power to the House Un-American Activities Committee. The HUAC investigates communist influence in Hollywood and blacklisting of suspected communists begins. Although this will later be labeled McCarthyism, McCarthy himself will not rise to prominence until 1950. The Federation of Atomic Scientists, a group of scientists associated with the Manhattan Project who are concerned about what they have unleashed, recommends nuclear disarmament and find themselves denigrated as unpatriotic.

The threat of Soviet infiltration is very real, as is the threat of nuclear bombs. These are dangerous times. Some politicians call for the creation of a cabinet level Department of Security. The watchwords used to justify the trampling of civil liberties are security and safety.

The story itself is very short, maybe ten or twelve pages long depending on the volume you are reading. It begins with a security official and twelve reporters in a chamber overlooking the floor of a laboratory. The reporters are there to witness “man’s first large-scale excursion into time,” the Brooklyn Project. They clearly fear the security officer who hands them briefing papers that include security regulations as well as suggestions on how to color the articles they are to write about the experiment.

When it comes time for questions, none of the reporters is bold enough to speak up until one is directly prompted by the security official. He asks about the concerns expressed by the Federation of Chronar Scientists and quickly regrets his question upon seeing the displeasure of the official who refers to them as the Federation of Chronic Sighers. Another reporter asks why they will not be permitted to leave the facility for two years after the experiment. Once their articles are cleared by the censors, why not let them return home in three months instead? This angers the official who points out that this is for security reasons and he notes that they all volunteered for this duty. After their respective editors recommended them for this assignment, they all had the democratic opportunity to refuse (of course, refusal would have brought their loyalties into question). 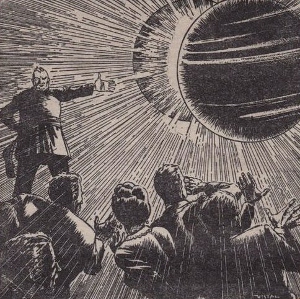 The nature of the experiment is based on the recent discovery that Newton’s third law (every action has an equal and opposite reaction) also applies to the fourth dimension (time). Although this reaction can be weaponized for use against the nation’s enemies, this experiment will simply be used to collect pictures and data from various periods in history.

The bulk of the laughs come once the experiment gets underway. It is darkly hilarious in a distinctly Tenn style and I won’t spoil it by going into any more detail.

Like another excellent political satire by Tenn, “The Masculinist Revolt” (reviewed here), “Brooklyn Project” proved too hot for most editors. One of them said, “I wouldn’t touch this with a ten-foot pole.” The story eventually found a home in 1948 at Planet Stories. The editor, Malcolm Reiss, told Tenn, “The story doesn’t fit our book in any way, and it’s dangerous as hell, but I figure this one is for God. An editor is entitled to at least one for God.”

The main thrust of the satire points out how disregard of civil liberties and the suppression of dissenting opinion are condoned in the name of keeping people safe. Green-lighting exceptions to civil liberties is a dangerous game. I suspect that some of you are thinking about examples in today’s society and most likely seeing them on the other side of the partisan fence. But are you ignoring them in your own yard?