When word spread that a new Independence Day movie was in the works, the geeky kid in me thrust a fist in the air in celebration. Sure every movie has its faults, but very few hit the mark of fandom with raw entertainment that allows the audience to dismiss reality and simply allow the audience to be immersed into a fun story. ID4 does that. And with the sequel Independence Day: Resurgence coming out in June, after only a twenty year wait, what could be better? 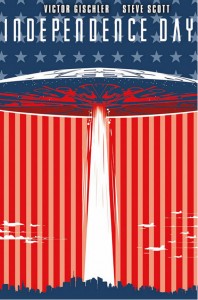 How about a new comic? The first issue (1 of 5), Independence Day #1 is scheduled to come out tomorrow on March 23, 2016 from Titan Comics. Written by Victor Gischler (Sally of the Wasteland) with artwork from Steve Scott (Batman, X-men), the future of the ID4 franchise looks brighter than ever.

They say humanity had twenty years to prepare. But Independence Day #1 shows us why the celebration began way too early, and twenty years may not be enough.

The story takes place shortly after the events in the original 1996 film created by Dean Devlin and Roland Emmerich. As the giant crafts fall from the sky following the destruction of the alien mothership, a lone functioning extraterrestrial vessel unlike any others plummets into the depths of the Atlantic Ocean. This mysterious occurrence prompts a top secret investigation with hopes to prevent a repeat of the recent destruction.

First, we meet Captain Meredith of an unnamed ballistic missile submarine. Chosen because of its conveniently close proximity to the downed craft as well as a platoon of marines specializing in advanced deep-water diving, the captain is more manly than most officers in her position and it is clear from the start that the safety of her crew and ship are more important than confronting an unknown entity.

The flawed hero of the story is Captain Joshua Adams of US intelligence, a heavily awarded army officer who happens to have a fear of water following a tragic boating accident that took his sister. Having the most experience with the technology used to take down the mothership and most suited to face this new threat, Adams’ vulnerability gives authenticity to a character that would have seemed too archetypical otherwise.

Dr. Jessica Morgan is the attractive leader of the mission. As a member of the President’s Advisory Council on Science and Technology, she seems the most out of place aboard the sub, but it is unclear at this time if her influence will be a hindrance or a benefit.

The quality artwork by Steve Scott stands up to the visual specter we’ve come to appreciate in the original film and expect in the new one. Readers will be drawn into the stunning imagery as if they were sitting in front of the big screen. The rough seas come to life and the dark depths below the surface give an eerie feel to the scenes, bringing even more tension to Gischler’s already fast moving thriller.

In what could be a spoiler to the upcoming film, the Captain Joshua Adams character displays a remarkable likeness to the actor William Fichtner who also happens to play the role of a one General Adams in IDR. A thorough biography of the character is in the introduction of issue #1 along with an image of the actor in the role of the General. There are two important points here. One, we can probably assume the Captain comes out of this adventure unscathed or relent to the fact that the comics and movies may rely on alternate realities. And two, the talent of Adams to bring flesh actors into the comic pages with unabashed certainty is evidence of his talent.

In true comic book form, what would a collector issue be without alternate covers. The uncredited patriotic front image of an alien ship preparing to fire its primary weapon as aircraft race in is described as the “Movie Cover,” which is more than fitting seeing how the original film is what started it all. Cover B, which has an alien face (do they have a name?) peering over the curvature of the Earth, is by artist Dio Neves. The piercing image of a suited alien breaking through a wall that makes up Cover C was drawn by Lee Garbett and the image of an underwater encounter by artist John McCrea, which is more representative of what is inside the first issue, is Cover D.

To go along with the blockbuster theme established in the original film, this first issue kicks off with a big bang as Gischler dives right in with some spectacular action worthy of an archetypical hero’s introduction. In what feels like taking a page from another fantastic blockbuster, our main characters are brought together during a horrific storm “somewhere in the Atlantic Ocean” as the submarine surfaces momentarily to accept the investigators who are dropped from a helicopter. A similar feat was done in the 1990 film The Hunt for Red October, and this comic attempt is just as daunting.

Victor Gischler and Steve Scott have done a fantastic job of reviving the tension and patriotism of the original film. So as we celebrate our Independence Day #1, rest assured that next month’s issue #2 (Unto the Breach) should have even more fireworks.