You’ll get a lot of answers when you ask when speculative fiction was born. Some will tell you that it began with Hugo Gernsback and the pulps. Others will say that it goes as far back as mythology and folklore. Personally, I go with those who say that it began with Mary Shelley’s Frankenstein, though I don’t discount earlier works such as Gulliver’s Travels or The Tempest. I say all of this because I’m taking us back to the 19th Century for today’s review. We’re going to review the classic novel Flatland: A Romance of Many Dimensions by Edwin A. Abbott. 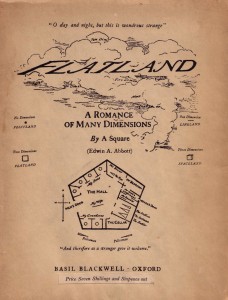 Imagine, if you will, a sheet of paper that is infinitely large and stretching to all sides. Now imagine that on this sheet of paper there are a series of geometric shapes, but instead of staying in place these shapes move about and have complex social lives. Welcome to Flatland, a world of only two dimensions. There is width and length, but there is no height or depth.

The book follows A. Square who is…well, he’s literally a two-dimensional square. He acts as our guide to the realm of Flatland and relates to use the ways of his countrymen and their doings. There are two main events that serve to completely change A. Square’s world view. The first is his contact with Lineland, a world of only one dimension, and the second is meeting a figure known as Lord Sphere. Lord Sphere claims to come from a strange world of three dimensions called Spaceland.

All right, that sounds lovely but is this actually a science fiction novel? I would argue that yes, it most certainly is. Science fiction has always been about asking the age old question “what if?” and so it is with Flatland. In this case the question asked is what would it be like if there were a world of only two dimensions. I can’t say when exactly I found out about Flatland, though I think it may have been while I was reading Physics of the Impossible by Michio Kaku. Regardless of where I first heard of it, I’ve always found the concept of Flatland is be utterly  fascinating, and I’m glad to have finally gotten around to reading it.

I loved getting to know all of the ways that life works in Flatland. For example, it is customary to meet someone by feeling them in order to determine their shape. It’s also considered polite to give directions to the way north when meeting a traveler on the road. Societal rank and job are determined by the number of sides that one has, with circles being at the top of things. Each successive generation gains an additional side, except for the low ranking isosceles triangles, though there are exceptions. Women, being incredibly sharp and pointy lines, have restrictions placed on them so that they can avoid constantly killing people by accident. We also learn much of the history of Flatland, such as why colors have been banned by the upper classes. There is some pretty great world building in this novel.

That having been said the fact the citizens of Flatland are all living geometric shapes does limit the amount of exploration that can go into their biology and physics. A. Square does hint at future explanations, but he decides that it will take up too much time and bore the reader. Or to put it another way, if you wonder how they eat and breathe and other science facts…well, I’m sure you all know the words to the Mystery Science Theater 3000 theme song. You’ll also notice that Flatland society bares more than a passing resemblance to the society of Victorian Britain. This is intentional, as Abbott intended for Flatland to be just as much a satire as a compelling story. Some readers may take issue with the way the female characters are depicted, but again, this has to do with the novel being a satire. Abbott was actually making fun of the sexism of his day rather than condoning it.

The biggest theme, however, is the theorizing of higher dimensions. Think of Flatland as an allegory for our own existence. The Flatlanders cannot directly perceive of a third dimension, but they can see its effects. For example, where Flatland gets its light is considered a great mystery, but then A. Square learns that it is provided by the Sun. Similarly, we cannot directly observe the fourth dimension, but we can see its effects upon us. What is this fourth dimension you ask? The answer is simple: time. We cannot see time in and of itself, but we can see the effect its passage has on our world. It’s certainly food for thought.

Since it was written in 1884 Flatland has long since fallen into the Public Domain. As such, many other writer have tried their hand at tackling the subject matter Flatland is built upon. Usually they will focus on one particular aspect while ignoring the others. Admittedly I haven’t read any of these books, but of the ones I’ve heard of thanks to TV Tropes I’d say Planiverse sounds the most promising. It attempts to look at how biology, chemistry, physics and culture would function in a realistic 2-D world.

Flatland being in the Public Domain also means that there have been quite a few audiobook adaptions over the years. My favorite would probably have to the one narrated by Patrick Frederic. There is a slight hiss to the audio, but it’s not that noticeable, and Patrick’s narration is very much worth it. Like I’ve said, there’s also plenty of great narration out there so go with whoever you feel like does the best job.

There have been two movie adaptions, both of which came out in 2007. They are Flatland: The Movie and Flatland: The Film, usually just referred to as Flatland. Of the two Flatland: The Movie is better. The animation is better, the voice acting is better, and it’s much closer to the plot of the original novel while still updating the satire for modern times. It also has an all-star cast including Martin Sheen, Kristen Bell, Tony Hale and Michael York. It clocks in at thirty-four minutes, compared to the other film’s ninety minute run time. It’s very much worth checking out if you get the chance. It even managed to net a few awards at various film festivals. Here’s the trailer for those curious.

In other adaptations, there’s the Flatland Tabletop RPG. Yes, you read that correctly. I’m not entirely sure what compelled the game designers to make such a thing. Flatland doesn’t exactly lend itself very well to RPGs, but if you’ve ever want to pretend to be a 2-D geometric shape going on 2-D adventures…well, here you go.

In conclusion, Flatland is a classic, and somewhat under-appreciated, novel that is well worth your time. And since its Public Domain you can even read it for free from places such as Project Gutenberg. It’ll give you something to think about even if the characters are kind of flat, though some would say two-dimensional…hey, I love puns. Seriously, check out Flatland, you won’t regret it.

Continuing with recent movie reviews, Steve looks at the Netflix Original movie ARQ, and also the 3D “mo-cap” movie Final Fantasy XV: Kingsglaive, and finds them both quite watchable. Not great, but watchable!

Handmaid’s Tale to Get a Sequel

A Holiday Gift from the Museum of Science Fiction