A Shanghai museum engages with the imagination.

A darkened room with tattered paper, some bundled up, some scattered around, all blank without any print or writing; a copse of artificial peach trees with fake flowers, putting together a purposely inadequate mimic of the classical utopian Peach Blossom Island; an actress constantly performing actions of browsing online information via touch control devices in a bright, sterile room. These are the scenes you will see if you stop by Rockbund Art Museum (RAM) in Shanghai during the art exhibition, Ifs, Ands, or Buts. 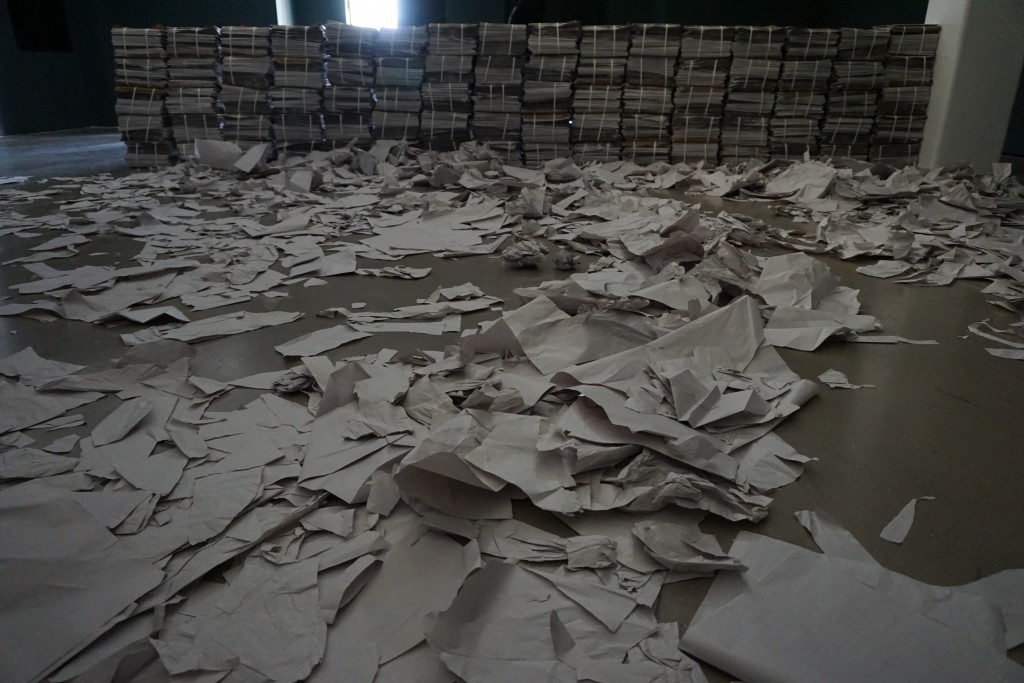 Endless (Nights): Here, Every visitor can take away one piece of paper, which is exactly the same size as The Strait Times, an English-language daily broadsheet newspaper based in Singapore. 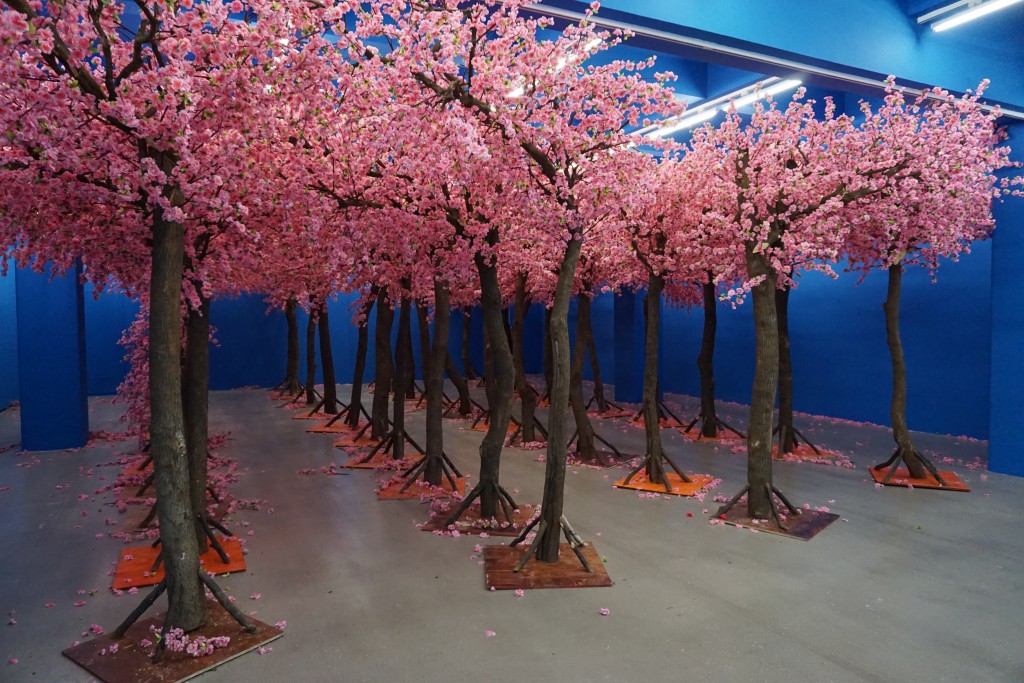 The Mysterious Island: The name of this art piece comes from Jules Verne’s novel. 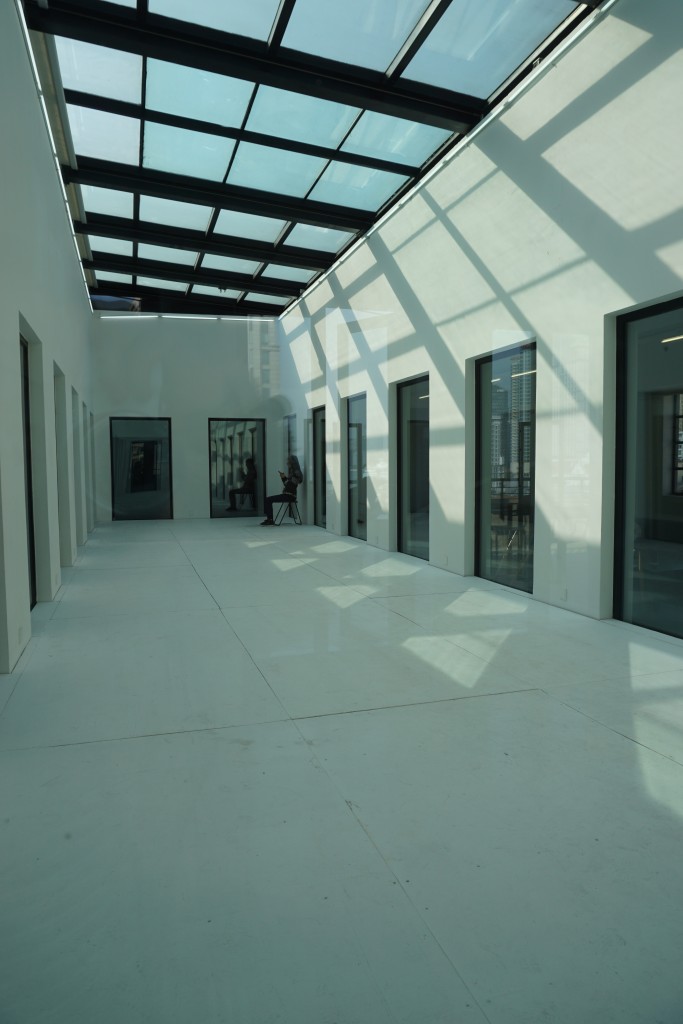 The art pieces are created by Singaporean artist and writer Heman Chong, who has presented a number of solo exhibitions in London, Seoul, New York, Bangkok, Singapore, etc. This is his first museum solo exhibition in mainland China, which explores the spaces between text and image.

However, for myself, and probably for my readers here, the most curious aspect of the exhibition lies in the fact that Heman is a fan of science fiction and he did not hesitate to demonstrate that in his conceptual art works.

As he said in an interview a few years ago, Heman had become influenced by the ‘serious’ side of the genre during his years as a student at the Royal College of Art in London, drawn to the intricate details constructed by the likes of Stanisław Lem, Kurt Vonnegut and Cormac McCarthy. Although I have not been to the exhibition personally, from the photos taken onsite by Regina, it was obvious that he remains that way until today. For example, the following calendar pages representing two dazzling new-wave science fiction novels, Time out of Joint, by Philip K. Dick, and Dhalgren, by Samuel R. Delany, while the art scenes described in the beginning also emphasis the surreal themes with a similar tone to the above mentioned books. (The calendar exhibited here contains a series of book cover designs for science fiction.) 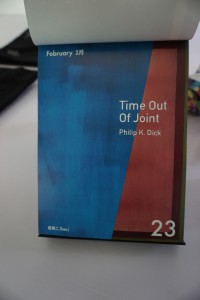 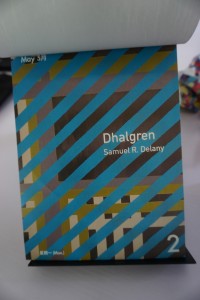 As a writer himself, Heman has mounted a collection of short stories on the wall, making up a fictional newspaper, Papaya Daily. The stories are supposedly from a mysterious reporter, whose identity is never revealed.  The contents of the stories are based on the gossips Heman has heard or read, which again increase the weird feeling that bespeaks the creativity behind the efforts. 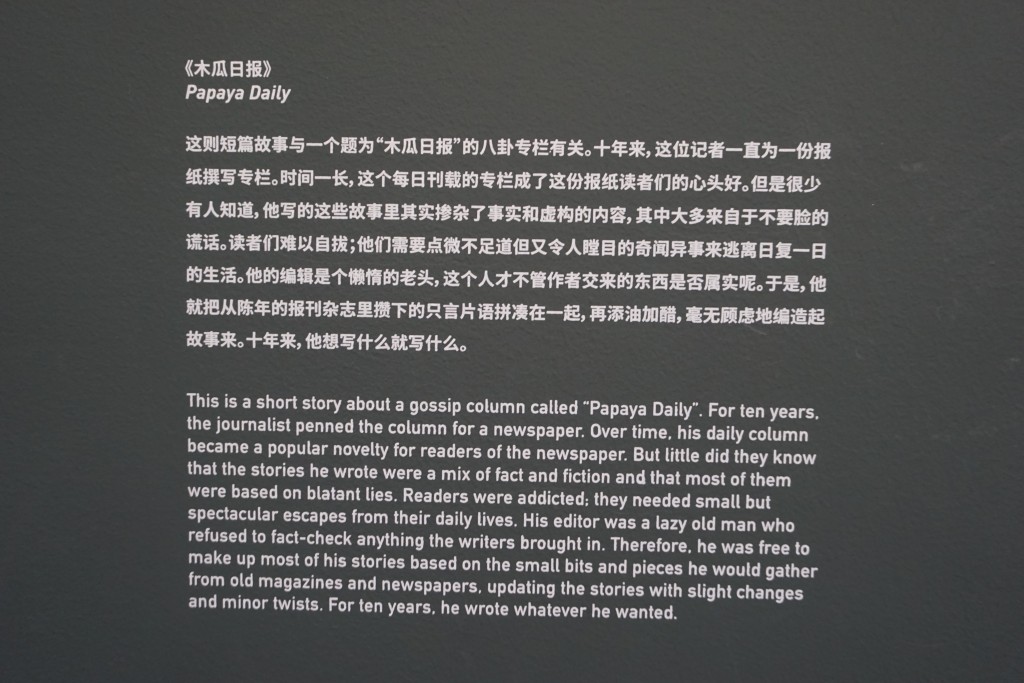 To add cherry on ice, one particular piece of art work is a collaboration between Heman and Ken Liu, who is a multiple-award winner for speculative fictions, as well as a lawyer and programmer. It involves the displacement of the gift with a bookshop, which is then entitled Legal Bookshop (Shanghai). As the name suggests, the books in it all touch the idea of law, including both fiction and non-fiction books. Heman invited Ken Liu to interpret the idea of ‘the law’ and the choice of books is entirely Ken’s.

From the pictures below, you can see how Ken supplements the concept of law with all kinds of peripheral subjects. 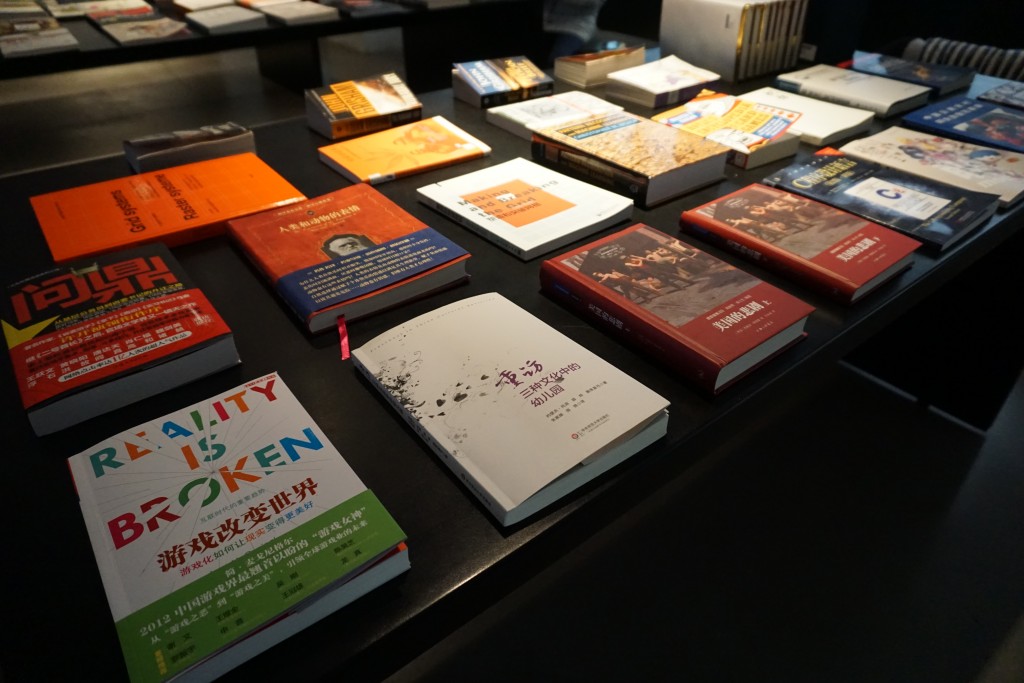 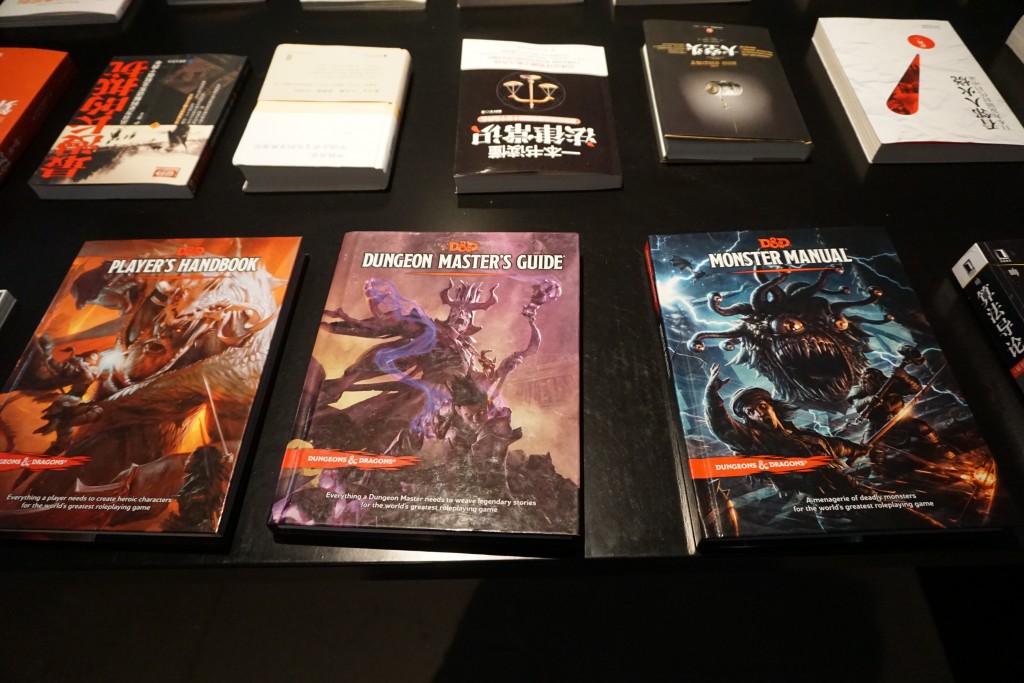 The list continues, but with the titles shown above, it is clear that Ken’s approach extents to as many as possible areas that have connections to the basic definition of laws and rules. There are the laws of natural science that drive our universe; there are the laws of economic that affect our everyday life; there are the rules of computer programming and, even the rules of board games. (Yes, there are some heartwarming little surprises here, for instance, the D&D rule books, and the Japanese cartoon series, Ace Attorney.)

Some might argue that a few of the books are a bit farfetched, but as an art project, I believe the whole point is to make people think and feel around the sense of possibilities, and to that end, Ken has made a wonderfully strong case. 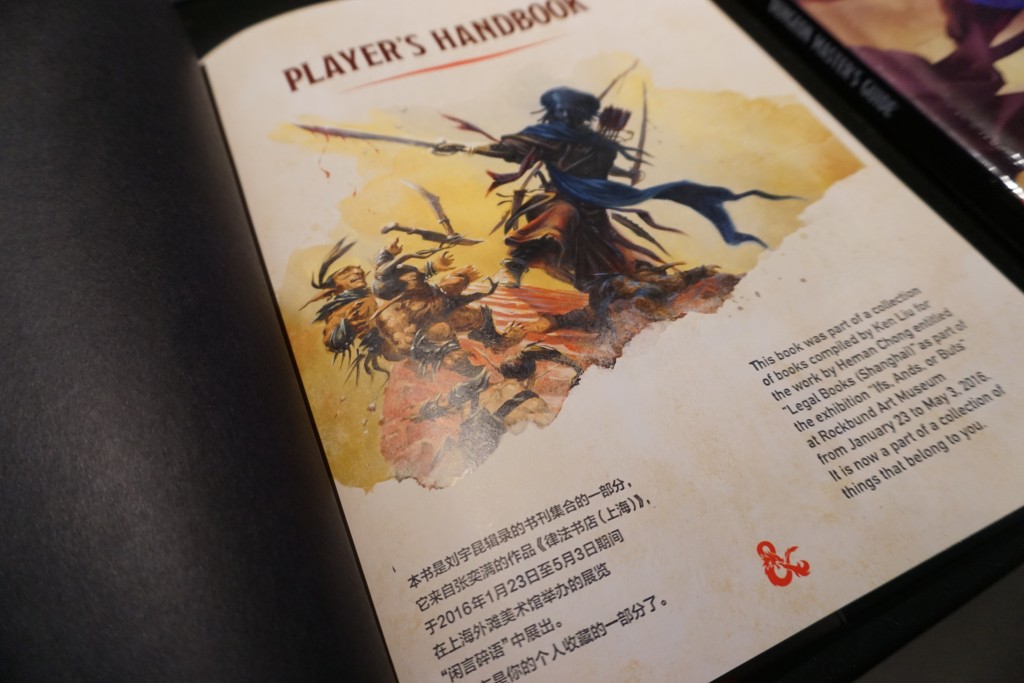 Finally, there is an interesting detail that may be a hearty gesture from both Heman and Ken. There are special imprints in the books on sale, which means, if you buy the books, you will own a part of the exhibition permanently.

All things considered, this lovely exhibition consists of materials packed up with abundant supply of imaginations.  If you have one or two hours’ free time, it is well worth the effort to take a stroll in this place that thoughtfully combines reality and fantasy. Besides, The Rockbund Art Museum is an elegant architecture with its own historical and cultural heritage – another reason to drop by. (Mystical Voice Over: RAM is my favourite museum in Shanghai – Well, maybe not so mystical, just a comment from Regina, who has provided the photos for this article.) 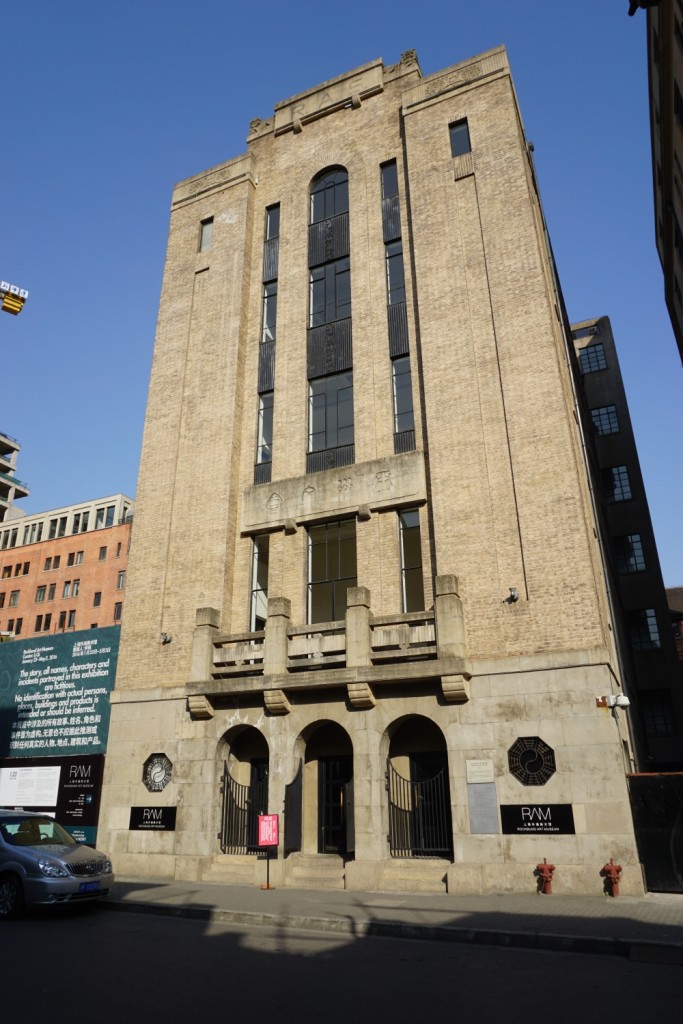 Short Story Review: “Kiss From a Queen” by Jeff Provine

Oxymoron? If you think the title of this blog post is one, then read on, dear disillusioned reader! Be warned though, it’s going to take me a moment to get to the actual poetry. The members of the SFPA and our friends on our Yahoo Group had a conversation “recently” (well it was recent when […]

There are a lot of crowd-pleasers in this week’s overview of science fiction romance novels.