Fellow AMAZING STORIES blogger and fellow Canadian R. Graeme Cameron recently published the first issue of a science fiction magazine called Polar Borealis. I congratulate R. Graeme on his achievement. It is certainly not easy to publish a magazine today and doing it the way R. Graeme is doing it, paying contributors up front and making the magazine available for free, is not for the faint of heart. That kind of endeavour requires a lot of faith.

I know this because of my experience with Dark Worlds Magazine.

Dark Worlds Magazine was an effort to recapture the excitement of the old days of the pulp magazines. Magazines like Amazing Stories and Astounding Science Fiction and Weird Tales. It was also an experiement in producing a magazine in the new print-on-demand marketplace.

Ultimately it was an experiment that failed. 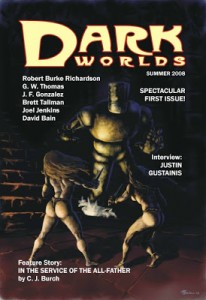 Myself and former Amazing Stories blogger G. W. Thomas launched the first issue back in 2008. If the cover was to be believed it was a SPECTACULAR FIRST ISSUE! Indeed, the first issue featured a lot of very talented writers and artists. C. J. Burch contributed a fantastic feature story. We also had stories from Joel Jenkins, David Bain, Robert Burke Richardson, J. F. Gonzalez and Brett Tallman. It featured illustrations by myself and G. W. Thomas as well as Samuel DeGraff and Aaron Sidell.

I was art director and sole production department. I was obsessive about the form that the magazine took. I wanted it to look so much like the old pulp magazines as to be indistinguishable from them.

That worked to our advantage in our print editions but was a considerable detriment to the electronic editions which, at first, was only the .pdf file used for the print edition. Because I stubbornly stuck to the two-column text layout favored by the pulp magazines, the pdf’s were a challenge to read on most devices at the time. 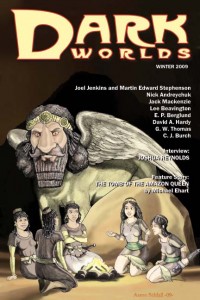 Later e-editions featured the text only with no attempt at formatting and no illustrations. I did not pay much heed to these editions, considering that they paled in comparison to the print edition layout. I have since learned what a mistake that was. The e-book has become a much more desired format among readers. All the fancy typesetting and layout that goes into a print edition is lost in that format. But to disregard it as unimportant is certainly not a wise move.

A second issue followed in 2008 with stories by Joshua Reynolds, David A. Hardy and Jack Mackenzie among others. In 2009 the magazine published a story by writer Michael Ehart, The Tomb of the Amazon Queen which was nominated for a Harper’s Pen award.

In 2010 and again in 2011 the magazine itself was nominated for a Pulp Ark Award for Best Pulp Magazine. 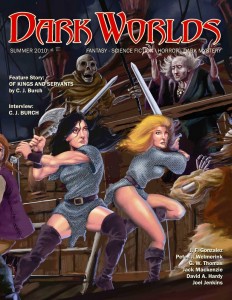 After issue four I decided to change the format. For our first four issues we published as a standard trade paperback size, that is; 6 inches wide by 9 inches tall. That is the format that most print-on-demand books prefer. But I was still obsessed with reproducing the old pulp magazines as closely as possible. With issue number 5 we switched to a Crown Quarto format which is slightly larger than a trade paperback at 7 ½ inches by 10 inches, a size which I felt better approximated the old pulp sizes. At this point we had switched from doing everything in Microsoft Word to laying out in Adobe InDesign. This allowed me a lot more freedom to be creative with the layout. Unfortunately I was still stubbornly holding on to the two-column format for the text, which made for a fantastic print layout but was a challenge for those who preferred the e-editions.

With the new layout production began to require more time and our output slowed. Sales slowed as well, as they had steadily since the first issue. We were constantly hopeful that they would pick up but, alas, they never did. With our 6th issue the writing was on the wall and Dark Worlds Magazine folded. 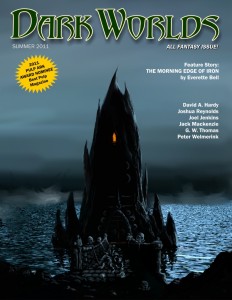 We did learn some lessons along the way. One was that a magazine needs to have a bit of a focus. I think that Dark Worlds was a bit too inclusive. Were were fans of all genres of pulp from the weird tales, to sword and sorcery, to science fiction and to western. I think our subject matter was too wide to appeal to readers in such a niche market. A magazine tends to do better if it has a narrower focus, a specific kind of story that a specific type of reader would enjoy. Dark Worlds tried to be too many things at once.

The biggest lesson, however, was not to ignore the e-book market. Print-on-demand was too pricey a proposition to compete with mass market printing (and even that is too pricey an option for many publishers these days). Catering to e-readers would probably have gone a long way towards selling more copies.

I hope that R. Graeme has found a better way with Polar Borealis. I wish him every success in a very challenging marketplace.

And, if anyone is interested, the final issues of Dark Worlds Magazine are still available here and here, but it won’t be for much longer. Check them out if you are so inclined.

I Dreamed of a Science Fiction Future Bright and Shiny

The Greatest Science Fiction Novels of All Time Part 5