It’s often said that we know more about the surface of the Moon than we do our own deep oceans. It certainly true, twelve men have walked on the Moon but only four have ever been to the bottom of the Marianas Trench. Ocean exploration seems to have always lagged behind space exploration. Subsequently, books about ocean colonization are comparatively rare compared to books about space colonization. It is always a treat when I do manage to find a book set around the colonization of the ocean. We’re going to talk about one such book today: Dark Life by Kat Falls. 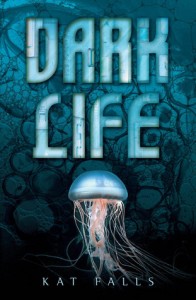 The book is set in a future ravaged by climate change and rising sea levels. To make matters worse, twenty percent of all land has fallen into the ocean as a result of a series of planet-wide earthquakes. Many people find themselves crammed into huge stack cities, desperate for even the smallest amount of space. However, many intrepid souls are staking claims and making lives for themselves on the sea floor. These subsea pioneers are known as the Dark Life.

The story follows a boy named Ty who is the son of two subsea pioneers. He’s lived in Benthic Territory his entire life and eagerly looks forward to being old enough to stake his own homestead. Ty’s life is promptly turned upside-down when he rescues a topsider girl named Gemma. She’s come to Benthic Territory in search of her missing brother. At the same time, a group of outlaws, known as the Seablite Gang, have been terrorizing the subsea pioneers. Ty and Gemma find themselves ensnared in a conspiracy that could determine the future of Benthic Territory.

One of the interesting things about the novel is that it isn’t just a science fiction novel, it’s also a Western. No really, many of the tropes and archetypes found in Westerns have been recycled and reinterpreted in an undersea setting. We’ve got rugged pioneers settling the frontier, bands of roving outlaws causing trouble, an ineffective government forcing brave individuals to bring justice into their own hands and much more. Their crops might be seaweed and fish, and their home might be the ocean floor, but these characters could fit quite snugly into a Western.

Another point of interest is the generally optimistic tone the book had. That’s not to say there aren’t dark moments, and the descriptions of life on land are certainly dystopian. That being said, the subsea pioneers seem to live fairly happy and fulfilling lives. They’d certainly like some more representation in the government of the United Commonwealth of States, but there’s a strong sense that things will work out with a little bit of elbow grease and hard work. In short, the sentiment of the book seems to be that no matter what humanity will find a way to survive.

I loved the world building in this story. It felt like there was way more to this world than just what I want encountered in the book. The description of the submarines and the floating trading posts. As I’ve already stated, the gorgeous descriptions of ocean life were a joy to read as well. If you love the ocean you’ll be in for a real treat with this book.

The science behind this book is kind of all over the place. On the stronger side we’ve got the architecture of homesteads. The homesteads are modeled off of deep sea organisms such as jellyfish because those shapes handle the pressure of the deep ocean better. All of the electronics are designed with the potential to get wet at some point. We also get some absolutely gorgeous descriptions of deep sea life. This includes several species that typically don’t appear that often in fiction such as oarfish, green lanternsharks, viperfish and much more.

On the weaker side we’ve got Liquigen. If the name sounds familiar it’s because you might remember it from the Bruce Willis movie The Trench. There is also the plot point of children born subsea developing superpowers as a result of the water pressure. Also, apparently eating bio-luminescent fish make you glow in the dark. Yeah, genetics and bio-luminescence do not work like that. That having been said, all of the above are still very cool, and they don’t detract from the story in the slightest.

There is an interesting story behind how this book came about. Kat Falls was inspired to write Dark Life when he son asked for a story. At the time his interests included the ocean, the Wild West and the X-Men. Being a good parent, Mrs. Falls mulled it over and produced the book we have today. I don’t know about you, but I’d say that deserves some kind of award. It rather reminds me of how Rick Riordan was inspired to create the Percy Jackson series. In terms of age group I’d say this book is somewhere between Middle Grade and Young Adult, but it is certainly a book that readers of all ages can happily enjoy. I especially recommend it if you have any reluctant readers in your life.

For all of you audio lovers, there is an audiobook version of Dark Life. It’s narrated by Keith Nobbs. In my opinion, Keith was perfectly cast for this book. He does all of the voices really well and I can’t imagine anyone else narrating Dark Life. In other adaptations, Disney snatched up the film rights early on. There were several false starts, but after a while it looked like a Dark Life movie might be on the horizon…then Tomorrowland performed so badly that Disney shelved all science fiction films not related to Marvel or Star Wars for the foreseeable future. In short, don’t hold your breath while waiting for a Dark Life movie.

Admittedly, Dark Life isn’t the deepest of novels, but it’s a quick and entertaining read. It’s also sure to make a splash in the world of ocean colonization books. So why not take the plunge, get your feet wet and…okay, ocean puns will stop now.

Seriously though, Dark Life is a really great book that features a much neglected setting. Its a fairly quick read and it is quite the page tuner. Pick up a copy today, you’ll be glad you did.

The Changing Horizon: A Brief Summary of Chinese SF in Year 2015

A handful of new releases

What happens when you DO judge a book by its cover (art).

The Clubhouse; Fanzine Reviews: The crisis that nearly destroyed LASFS.

We’re Getting Closer to Human Cloning. Here’s What’s Stopping Us.