In this week’s viewing: BBK/BRNK and ERASED join Gundam in showing that adults are a bunch of double-crossing creeps, and more! 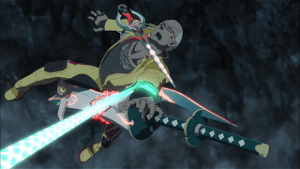 BBK/BRNK #5 – It’s Kinoa’s turn for a fight and flashback. She looks back on a teen dream romance where a magical boyfriend rescued her and taught her to embrace her power while sweeping her off her feet. Although then it turned very true-to-life when it developed that the much older guy was in fact a total creep. If the age difference in Twilight ever made you uncomfortable, BBK/BRNK is here to affirm your feelings.

Adults in general are coming off very badly in this show. Kogane, Kinoa, and now Hīragi have all been betrayed in some way by their Entei counterparts. Even Azuma’s mother, presented in the first episode as a force for good, may not have been entirely that. Last week, when Azuma said he wouldn’t leave anyone behind, Hazama/Horino said he didn’t sound like his mother. Which suggests that originally the plan was for everyone with pieces of Ōbu to go to Takarajima, only Migiwa for some reason was the only one who made it.

Much time is devoted to contemplating the motivations of the bubuki. They seem to be sentient enough to have feelings and opinions. Hīragi’s bubuki responds to distress and kindness, and Kinoa’s are willing to go the extra mile to keep themselves (literally) out of Arabashiri’s hands. 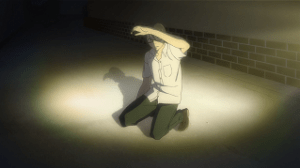 ERASED #5 – Accepting that Kayo is dead again and he has failed, Satoru snaps back to 2006, where he’s now the prime suspect in his mother’s death. The police and the murderer are hot on his heels, but he learns in between escapes that his actions in 1988 were real and the timeline has adjusted to the change.

Time to step back and see what clues we have. I suspected the teacher, Yatsushiro, up until now, because someone with a habit of kidnapping kids would need to be good at gaining their trust, and he was in a position to know who was vulnerable. But that scene inside the Hinazuki apartment with Kayo lying on the floor and her father saying, “What do we do now?” implies that Kayo’s mother killed her through abuse. So is Kayo’s death a coincidence, or are the Hinazukis somehow involved in the other disappearances? They don’t seem like the types to go to that much trouble.

Sachiko’s murder suggests that there could be multiple people involved in at least that one death. She suddenly remembered something that pointed toward a specific person she knew, and she called a different person who she still trusted. So either she was wrong, or the person she trusted was in on the murder plot too.

If there’s more than one person involved, perhaps it’s Yatsushiro and the Hinazukis. Perhaps they wound up getting help from Yatsushiro in disposing of Kayo’s body and framing Yūki. 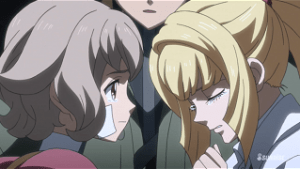 Mobile Suit Gundam: Iron-Blooded Orphans #18 – Kudelia saves the day, but then comes down with a bad case of Impostor Syndrome. It can only be treated by a pointing out that while the mech pilots defeated a few other mechs, she saved them from an entire freaking fleet by just giving a speech.

The group hug at the end has all but confirmed Mikazuki, Kudelia, and Atra as a trio. Iron-Blooded Orphans is being very brave, putting a polyamorous relationship front and center and not treating it as freaky. I only hope it doesn’t mess things up by having Atra or Kudelia die a tragic death and tell the other two to have a happy heteronormative relationship with her last breath. The same goes for Yamagi and Shino. Their attraction doesn’t seem to be going anywhere fast, but the show definitely wants to keep reminding us that it is there.

Meanwhile, Mikazuki has finally pointed out the obvious about the guy in the mask. The news that Gjallarhorn wants the Seven Stars families to butt out maybe explains why Fareed feels it necessary to work undercover, but putting on a disguise that shouts HEY LOOK AT ME still seems silly.

So Fareed is now working with Nobliss Gordon, who, as you all recall, wants Kudelia to die a symbolic death. Any bets that that transport he provides is going to be a deathtrap? 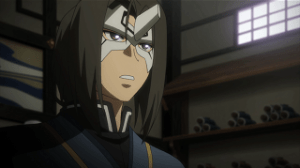 Utawarerumono: The False Faces #18 – Exposition break over, it’s wartime again! This time, Yamato is invading Tuskuru, presumably over their refusal to reveal the burial location of their founding emperor and his extremely valuable artifact from game #1. Haku is torn between protecting Kuon and rescuing another friend. Sure, it’s only a supply run, but going into a war zone, Haku realizes that eventually he’ll be forced to choose a side.

All of a sudden, this feels like not a bad show again. If only it could have skipped about two-thirds of last season, this could be a pretty good show overall. Yes, we’d have missed a lot of character time, but how much did we really learn about the people Haku is supposed to care about? How long did it take you to remember which one is Kiuru? (For those still sorting it out, he was the young man with the bow.) 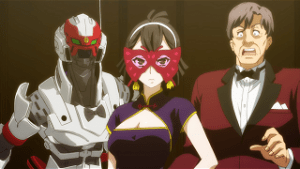 Active Raid #5 – A fun but inconsequential episode gives some extra dimension to a couple of the supporting team members. First, Funasaka gets a chance to live out his James Bond fantasies, and then Amano gets to strut her stuff. Amano also has hints of a tragic backstory; somehow, at a young age, she had to quickly earn a lot of money to provide for two even younger siblings.

Logos seems to be have joined forces with Onodera for kicks. He’s the first non-hacker to work with them without being tricked. He gets what he wants, and he provides a ready excuse for them to show off how they can hack military systems and spread random terror. The head villain seemed unhappy when Dog developed an itchy trigger finger, but it’s not clear if Dog was subverting some deeper purpose or he was just making the game a little too real.

I Dreamed of a Science Fiction Future Bright and Shiny

When it comes to science fiction romance, who doesn’t love a man in uniform?

Online Gaming for the Busy Gamer

CLUBHOUSE: Review “Small Rain and Other Nightmares,” by Paula Johanson

Inoculate Against the Lurids: Language Is A Virus