A Painted Goddess by Victor Gischler is a satisfying conclusion to the epic fantasy trilogy A Fire Beneath the Skin, a sword and sorcery adventure of tattoo magic.

The good Doctor has done it again.

In the third and final book of the fantasy series A Fire Beneath the Skin by Victor Gischler about a magical land full of angry gods, tattoo sorcery, and lots and lots of blood, an epic battle of biblical proportions is finally fought. Did I mention that there is lots of blood? 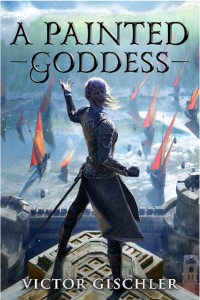 Newly published on January 19, 20016 from 47 North (Amazon Publishing SF/F imprint), A Painted Goddess follows the first book Ink Mage as well as the middle stanza The Tattooed Duchess (see Amazing Stories reviews of Ink Mage here and The Tattooed Duchess here). This trilogy is a little different from what we usually see from the Edgar Award nominated author as he is probably more noted for his hard crime novels and his growing resume of writing for some popular comics. Rest assured, Gischler still brings you the familiar character heavy story with his usual, and often necessary, sex and violence.

A Painted Goddess centers around Duchess Rina Veraiin, a young “ink mage” who is struggling to let go of her “normal” life and understand the responsibilities of her growing powers. When tattooed with the magic of the Prime, the artwork gives the bearer fantastic abilities. A fantastic idea with endless possibilities. You may never look at another tattoo the same way again.

We should first point out that readers will hit the ground running as this third book jumps right into the action where the story left off from The Tattooed Duchess. Considering the first two books were initially released in gradual installments through Kindle Series format via Amazon.com, A Painted Goddess was released as a complete book without all of the timed released cliffhangers. Those already familiar with the series format might consider this book just another, though much larger, installment.

Let’s see where we left off. We have the Empress Mee Hra’Lito amassing more than a thousand ships in a last ditch effort to cross the sea and invade the Kingdom of Helva and bring stability to her economically faltering Perranese Empire. Rina is fighting her own emotional demons by avoiding an arranged marriage that could strengthen the realm. At the same time, she is off seeking additional tattoo magic that will help ward off the invading forces. While away, she leaves the Klaar Duchy in the capable hands of one-time brothel mother Stasha Benadicta. Far away, Rina’s onetime love interest Alem the stable boy joins castle guard captain Tosh and the tattooed gypsy girl Maurizan on a mysterious “errand” for Rina to the Scattered Isles in search of mythical ink, stencils and scrolls. Oh, and Baron Brasley Hammish is away at the Great Library in Tul-Agnon with the beautiful yet century-old wizard Talbun in search of the something “critically important” that will help Rina save the realm.

Perhaps Gischler should have included a Star Wars’esque opening crawl to bring fans up to speed, though the impact probably wouldn’t be as appealing unless it actually scrolled. Maybe a flipbook? Anyway, with all of these multifaceted plotlines and such a vast cast of characters, it is quite a lot to take in. The book is darn entertaining and can probably be appreciated as a stand-alone read for those not enamored by a lot of backstory, but it is highly recommended to check out the other two books first to enjoy the complete experience. It is well worth the time and investment.

Gischler takes a page from almost every successful element of fantasy fiction and mixes them into a unique blend of adventure unlike any other. Rest assured that there is archetypical powerful wizard war, the magical glowing sword, the downtrodden rising up against the powerful government, the distant nation threatening an upheaval, the tension between those betrothed and those desired, and of course the inevitable quest. But then he throws in things like an Indiana Jones like tomb-raiding, a Moses like control of the elements, long lost civilizations, and a battle of Gods reminiscent to those in Greek mythology, and you have a story that is bound to find an audience in practically any reader. Practically.

A Painted Goddess is a violent story with blood drenched macabre imagery and lots of fire and stabbing. Did I mention that there is lots of blood? But the story also has a softer side with some compassionate relationships that bring the characters to life and a few of those awkward moments where the characters are not so, well, fictional. Under this same umbrella of realism, the sex is graphic and the humor is raw, or vise verse. In any case, Gischler does allow the reader to relax once in a while, a welcomed break from the otherwise high tension and suspense.

A Painted Goddess by Victor Gischler has a satisfying conclusion with just enough answers to complete the A Fire Beneath the Skin trilogy while leaving a few dangling unknowns to pique the reader’s curiosity and hope that the author decides do go back to the realm someday. So until then, and we do hope that there will be a return someday, sit back and consider what tattoo you might want and what magical power it might possess.

Is there a magical tattoo that would help me read more, perhaps read quicker?

Partial Review: The SF Chapter of Neurotribes by Steven Silberman

Anthology Review: Tales from the Otherverse edited by James Reasoner

Sam takes a tour of free audio fiction on the web.

A tri-annual speculative fiction magazine of works by “queer POC / Indigenous / Aboriginal creators”, and a call for a crusade against an entrenched foe.

Happy Holiday of Your Choice! from the Staff of Experimenter Publishing

Lawrence Keith Tucker To Be Laid To Rest March 7th