Home Fantasy Can you Hear Me, Major Tom?: The Death of David Bowie

If science fiction had its own rock star, then that rock star was David Bowie.

Back in the early 1970’s, one could not talk about science fiction in the media without mentioning David Bowie. His portrayal of Thomas Jerome Newton, the alien disguised as human was Bowie’s first acting role in the feature film The Man Who Fell to Earth. Bowie’s odd, androgynous looks were perfectly suited for playing the main character in the film adaptation of Walter Tevis’ 1963 novel of the same name. The novel is about an alien, a true outsider, on a mission to save his people, who becomes stuck in the mire of Earth’s vices; greed, money, television, sex and alcohol.

The role of the alien is one that Bowie adopted and used to create his image. It was not much of a stretch. Bowie was always an outsider. As a youth he was frail, androgynous and sported long hair which caused him a good deal of grief on the streets of South London. A fight at school resulted in an injury to his eye, leaving it permanently dilated and giving people the erroneous impression that he had one blue eye and one brown eye. 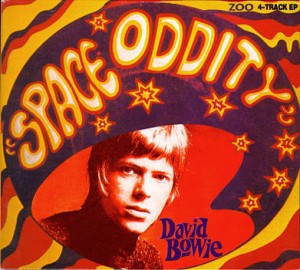 Bowie embraced the role of the outsider in his music, and his early career as a mime. His first song to make the charts was 1969’s Space Oddity, whose release was enhanced by the coincidental launch of Apollo 11. Space exploration was much on the world’s mind and Bowie’s song about the hapless Major Tom becoming intoxicated by the lure of outer space fed into the worldwide fascination with space travel.

Bowie pushed the role of the outsider/alien even further with the creation of Ziggy Stardust, a glam rock star come to Earth from the planet Mars. Bowie as Ziggy, backed up by his band, The Spiders from Mars, took the rock world by storm. Songs such as Life on Mars and Starman kept him closely associated with science fiction concepts.

Indeed, Bowie had conceived the idea of adapting George Orwell’s novel 1984 into a musical. The project never came to fruition but much of the music and songs that he created for it were fed into his album Diamond Dogs. The cuts 1984, We are the Dead and Big Brother resulted from that aborted project.

With roles in Tony Scott’s 1983 film The Hunger, as well as his musical contributions to the remake of Cat People the year previously, Bowie renewed his association with science fiction and fantasy

In 1986 Bowie played Jareth, the Goblin King in Jim Henson’s dark fantasy film Labyrinth. His performance as the villain made a lasting impression and his music is interwoven through the soundtrack. The film has become a cult classic in the years since its initial release.

In 2006 Bowie portrayed another of science fiction’s great icons, Nikola Tesla in Christopher Nolan’s film The Prestige. Bowie also voiced characters in a number of animated series. Among his voice roles was Lord Royal Highness in Spongebob Squarepants. 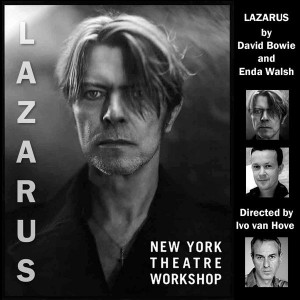 In the last eighteen months Bowie knew he was dying. He had time to plan his final works carefully. One of his works was an off broadway production called Lazarus, a sequel-of-sorts to The Man Who Fell to Earth. In the play, written by Bowie and featuring his music, Michael C. Hall (Dexter) plays Thomas Jerome Newton, the alien stranded on earth, as a dying man who cannot die. Much of the play (and indeed, his final album, Blackstar) made little sense to critics and audiences until his death and the revelation that he knew the end was coming. He had, it seemed, carefully constructed everything to only really make sense when viewed through that particular lense. His own end became an integral, if not the integral part of the entire work. 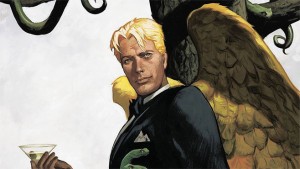 Bowie was not a science fiction rock star. He was an international pop star, an icon of music and fashion on a global scale. He belonged to all genres and all styles. But his association with science fiction and fantasy never quite managed to get severed. His world intersects with ours in unexpected and surprising ways. Bowie’s image was influential to young fantasy artists and writers. Neil Gaiman’s comic book Sandman featured Bowie as Lucifer Morningstar. This was a deliberate homage on the part of Gaiman and the artists on the Vertigo Comics’ title. Bowie shows up (albeit unnamed as such) in William Gibson’s 1996 science fiction novel novel Idoru as a virtual reality music master.

He was not a science fiction rock star. But his world intersects with ours in many ways and, at this time, a mere week after his death from cancer, mere days after releasing his last album, Blackstar, I think it is only appropriate that we can claim the small part of him that was our own.

Ziggy Stardust has gone back to Mars. Major Tom can’t hear us anymore.