Shakespeare vs Cthulhu? The Bard as Bond? I think I need ‘Q’ to explain all of this to me…. 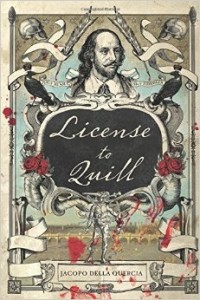 2016 is the 400th anniversary of the death of William Shakespeare and the SF&F community already has a lot of tie-in media ready to go. For example, there is Shakespeare Vs Cthulhu by Jonathan Green up on Kickstarter and Abaddon Books is publishing the new fantasy series, Monstrous Little Voices, featuring characters from Shakespeare’s works. An early entry into the Shakespeare celebrations, which I will no review for you today, is License to Quill by Jacopo della Quercia (The Great Abraham Lincoln Pocket Watch Conspiracy, Cracked).

Our story takes place in the midst of the Gunpowder Plot. Guy Fawkes, the religious fanatic whose visage is sometimes worn by liberal American youth, approaches Shakespeare about writing a play that will incite the people against the King and return Catholic rule to England. The only real requirement is that the play has to include a certain reference to witches. Of course, our William is no mere playright. He is actually a former spy of England and as soon as he learns of the plot, brings news of it to Thomas Walsingham, England’s current spymaster. Walsingham (or “W”) reactivates Shakespeare as Office of Ordnance agent (or “OO agent”) to infiltrate the conspiracy to learn more about their plans, especially their alliance with the “cunning folk”. As Shakespeare begins to write his play (which he plans to set in Scotland), Christopher Marlowe is enjoying his exile in Venice, his “death” having been staged by Walsingham. He too, however, will find himself coming out of retirement as a mysterious woman wants to desperately meet him.

If you haven’t guessed, License to Quill is a fictional mash-up in the style of Pride and Prejudice and Zombies. In this case it combines the real lives of William Shakespeare and his contemporaries (including Francis Bacon) with the themes and tropes of James Bond. It actually works rather well given the history of the era. There are some blank areas in the life of Shakespeare, Marlowe was accused of being a spy and apparently the Walsinghams have a history of working in intelligence. In many ways this book is similar to Harry Turtledove’s Ruled Britannia, which also featured Shakespeare being tapped to write a play to incite a rebellion. Turtledove’s book, however, was set in an alternate history where the Spanish Armada successfully invaded England, while License to Quill is more of secret history. Nothing really changes to the timeline, we just learn that the official record isn’t exactly correct.

Despite my usual distrust of secret history works, I still enjoyed reading License to Quill. I thought Jacopo did an excellent job capturing the look and feel of early 17th century England, while melding it successfully with the world of James Bond. It was funny without being too obvious and I enjoyed all the references found within, including one from the Assassin’s Creed series. Plus Macbeth has always been my favorite Shakespearean play and I had fun learning its “true” history.

If I had to pick one thing to criticize, I would say the ending was a little rushed. Although I don’t want to spoil anything, it seemed like Jacopo was struggling to wrap all the different plot lines up at once and it became somewhat of a mess. License to Quill had been a pretty solid spy thriller up to this point, when it suddenly turned into something that would be at home in an epic fantasy. Maybe Jacopo just wanted a big ending or was trying to match what history tells us enough so that the secret history he was crafting still fit into the historical record, but it was a little over the top for me.

Still that is just a minor quibble. If you are one of those weird kids (like me) who actually enjoyed reading Shakespeare in high school or will always pay to see the new James Bond film, then you should pick up a copy of License to Quill.

Review: The Maker’s Guide to the Zombie Apocalypse by Simon Monk

2013Feb17 – Time spent in front of a computer will suck you into a rift in the space-time continuum. You doubt this? Leave a clock near your computer and voila … tempus fugit. (If you expect to get any work done, place the clock behind you. A watched clock doesn’t tock … but … ticks […]

Are You Excited About Doctor Who’s 50th Anniversary?

Sequential Wednedays #9 – Boston, Where Yo’ Con At?