the producers had no understanding of what the books are about and no interest in finding out – Ursula K. Le Guin

Warning:  I am not worrying about spoilers here.  Best not to read any of it if you want to see the TV show or read the book for the first time.

Every time I think about writing this review, a scene from the movie Blazing Saddles pops into my mind.  Madeline Kahn performing her dance hall number:  “I’m tired.  Sick and tired…”

I’m sick and tired of alien abductions that begin with really bright lights spearing through the cracks and keyholes of doors.

I’m sick and tired of screws unscrewing themselves as a metaphor for alien menace.

I’m sick and tired of adaptations that unnecessarily change the little details when there was no good reason to do so.  I refer of course to Karellen’s skin color.  Here it is in Clarke’s own words:

There was no mistake. The leathery wings, the little horns, the barbed tail – all were there.  The most terrible of all legends had come to life, out of the unknown past.  Yet now it stood smiling, in ebon majesty, with the sunlight gleaming upon its tremendous body, and with a human child resting trustfully on either arm. 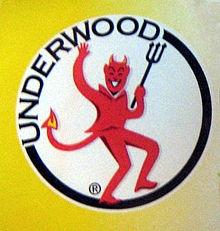 Nope.  Gotta make the devil red;  after all, that’s the color he’s depicted with on the Underwood deviled ham can.  And I choose that food product with deliberation.

I’ve got to wonder what the thought process was back at the studio when they were trying to decide what color to airbrush the latex.  Was it an intelligent decision arrived at following thoughtful deliberation?  Maybe the audience wouldn’t recognize the devil if he was black;  maybe they’d just receive him as an outlandish alien.  Or maybe Test marketing shows that…  I suspect though that it was something more along the lines of it sends a bad message to the black audience; viewers will think we’re endorsing Black Lives Matter; well, on a black-and-white xerox, red shows up as black…

But you know, I’m really too freakin tired to get upset about this.  I was up at 2 am yesterday to try and catch some of the Geminids (no luck) and then had to stay up to watch this and The Expanse.  I had a 21 hour day.  My focus was more on fighting off the desire for a cup of coffee at 9 pm than it was on confirming my trailerized impressions, that C.E. had been reduced to a reboot of V.

Speaking of which.  I had hopes early on when the show’s Rupert Murdoch media tycoon stand-in firmly rejected having his newspaper refer to the aliens as The Visitors, replacing it with Overlords.  It was a nice moment, deftly handled, firm messaging to the audience that Childhood’s End might evoke memories of the water-stealing, rat-eating lizards-in-human-skin costumes TV show.  But then they lost me with a series of other video homages to Independence Day and CE3K, not to mention the obvious dumbing down of the scientific aspects of the story.  I sincerely wish that someone would explain to the suits that some familiarity with basic scientific concepts is a requisite for those receiving SCIENCE fiction entertainment.  (And, you know, that larger audience whose knowledge of the world and all things in it you obviously don’t trust?  Most of them manage to pick things up from context, at least if you respect the idea that they all have some basic intelligence.  Respect your audience!  Do not talk down to them!  They can and WILL rise to the challenge – if the story is interesting and compelling enough.  Heck, some of em might even take the time to Google some of the cool stuff they’re seeing and might learn a little something in the process.  How cool is that?)

The conflict in the reader’s mind regarding these benevolent Overlords is that while they do certain things that human beings find infuriating (like refusing to reveal themselves), every word spoken and every promise made by the Overlords is delivered, apparently with no strings attached.  We (characters in the book and the reader) are forced to trust the Overlords.  At first we trust because we have no choice.  A trust resting on a foundation of deep skepticism:  when is the other shoe going to drop?  When is the  Missouri farmer going to inform us that we can keep on having the good stuff, as long as we sacrifice a few unimportant people for the Overlord’s dinner table?  When are they going to try to buy Manhattan island for a handful of glass beads?  We’re collectively waiting for Frank-n-furter to say “…pation”, and he never does.  (This is called “dramatic tension”.)

The tension Clarke builds in the opening section of the book is underpinned by technological wonders;  new fertilizers, new disease fighting agents.  But when the TV show gets to that part, the most these Overlords can manage is to suggest that we convert our navy ships into freighters so we can ship our leftovers to Africa and to force the Saudis to give up their oil pipelines so that desalinated water can be pumped into the Sahara.  (How long does it take to clean out those pipes?  No doubt the Overlords will furnish Alien Dawn to help with that.  Do those pipes actually reach the Sahara?  What about the environmental impact of turning one of the world’s largest deserts into green space?  If the Overlords can destroy a farm house and then put it back together like the little robot creatures from Batteries Not Included, why can’t they just make the desert bloom?)

The sad thing about this adaptation is, you can see the bones, at least if you’ve read the novel itself.  Which no doubt (at least based on Twitter feeds), the majority of the audience has not.  If they had, you’d not get Tweets saying “I’m blown away!”, since you’d already know that the Overlords were supposed to look like Satan.  And that there was nothing to be blown away by.

Actually, the really sad thing is – so few of the audience have read this story in the original.

That’s the basics on adaptation:  a poor job in typical fashion:  changing things that needed no change, dumbing things down so as to reach a “wider” audience, relying on imagery instead of story to tell the story.

But what about the show itself?  I don’t give C.E. high marks in this regard either.  One set of scenes in particular illustrates this.

Partway through, Rikki Stormgren (the Overlord’s chosen representative) visits Karellen and is given a gift.  It’s a strange twist of polished metal;  Karellen and Stormgren engage in a bit of repartee (what if I refuse it?, then refuse it…), which I suppose was inserted as a way to illustrate that the Overlords are benign;  you can’t offend them by refusing a gift.  And yet humanity as a whole is not allowed to refuse the Overlord’s gifts.  Hmmmm.  This metaphor thing….

Stormgren takes it and upon returning to his Missouri farm he is accosted by Secret Service agents who demand the device and even resort to drawing guns on Stormgren.  Rikki’s girlfriend shows up with a camera to film the abuse of power.  Rikki banters with the head secret service agent and then abruptly hands the device over. (Talk about ham-handedly inserting a comment on one of today’s societal conflicts…)

Next thing we know, Rikki and the agent are fast friends, marching through the corridors of power, giving each other a helping hand up, power plays and gun threats all forgotten.  As is the device.

Others have remarked (accurately) that in some ways the TV show is a visual Cliff Notes for the novel, jumping from key scene to key scene (all the while developing a love triangle romance between a Missouri farmer who saves his town from miners, his living girlfriend and his dead wife).  This format was probably selected, at least in part, due to the inherent time constraints of converting a (rather short) novel into a teleplay.

If so, what then was the point of those pointless scenes?  They were a huge waste of screen time, adding absolutely nothing to the story (unless of course the strange device is going to turn out to be the Overlord version of a lightsaber that will be used to save Rikki at some later, not in the original story, time.

I wonder if Art would say something similar to Ursula Le Guin’s remarks after the Sci Fi channel’s airing of The Legend of Earthsea, loosely based on her Earthsea novels, if he were still alive.

Ursula wrote an article about this for Slate, and I shall quote some of the pithy and relevant remarks here in closing:

The books, A Wizard of Earthsea and The Tombs of Atuan, which were published more than 30 years ago, are about two young people finding out what their power, their freedom, and their responsibilities are. I don’t know what the film is about. It’s full of scenes from the story, arranged differently, in an entirely different plot, so that they make no sense. My protagonist is Ged, a boy with red-brown skin. In the film, he’s a petulant white kid. Readers who’ve been wondering why I “let them change the story” may find some answers here.

I said that although I knew that a film must differ greatly from a book, I hoped they were making no unnecessary changes in the plot or to the characters—a dangerous thing to do, since the books have been known to millions of people for decades. They replied that the TV audience is much larger, and entirely different, and would be unlikely to care about changes to the books’ story and characters.

When I looked over the script, I realized the producers had no understanding of what the books are about and no interest in finding out. All they intended was to use the name Earthsea, and some of the scenes from the books…

I’m still tired.  Mostly tired of seeing that the same old dynamic seems to be in place, at least when it comes to adapted SF on the little screen.

The Expanse?  Liked it, but will have to reserve comment until I can watch the first episode again;  I kinda nodded off a few times while watching it.

The Great Collection in the Sky

Review of the new show, Salem. Be on the lookout for familiar faces!

Commander Charlie Shaw finds himself alone on the red planet and isolated from his crew. He uncovers some disturbing truths about his situation and the fate of the mission.

How to Redact and Re-integrate Your Redundant Reliquary of Recollections, or: How Not to Keep a Scrapbook