How do we know when it’s cold?

We feel it. We feel the cold on our skin, in our ears, in our lungs. But how can one see the cold?

With your eyes alone you cannot tell how cold it is. Sometimes there isn’t enough visual information to even let us know that it is cold. You can get clues, of course. When you exhale, can you see your breath? Can you see frost on outside surfaces? Is there ice on the water? Is there snow on the ground?

Okay, that last clue is pretty obvious, but the point is that there are ways that an artist can depict the cold that range from the subtle to the blatantly obvious.

But is that all you need? Visual cues? Not necessarily. 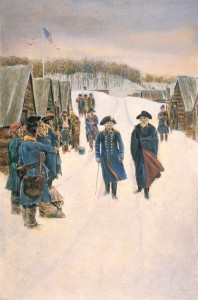 Howard Pyle was an American illustrator and author. He is most famous for his illustrations of the King Arthur legends well as for illustrating his own book The Merry Adventures of Robin Hood, among others. He also founded his own school of art and illustration.

One frosty autumn day Howard Pyle brought his illustration students outdoors to find some wild hickory nuts. After they had gathered up the fallen harvest from alongside the banks of a millstream, they noticed many more nuts resting on the stream bottom. “Well boys, there is only one way to get them,” one of his students, Frank Schoonover, recalled him saying. Pyle removed his shoes and stockings and rolled up the sleeves of his sweater. He waded into the icy water, plunging his arms down to the stream bed to gather the remainder. Pyle did not allow the moment to pass without a lesson. “The poor soldiers at Valley Forge felt the cold, just as we feel the cold now,” he said. “The ragged lot that marched against the Hessians at Trenton felt the icy water and the numbing cold and I don’t believe it’s possible to paint a picture of that sort within the four walls of your studio unless you feel the cold even as they did.”

So there’s more to depicting the cold than just painting snow on the ground and coloring skin blue. You have to know how it feels.

Let’s take a look and see how fantasy artists manage to depict the cold. 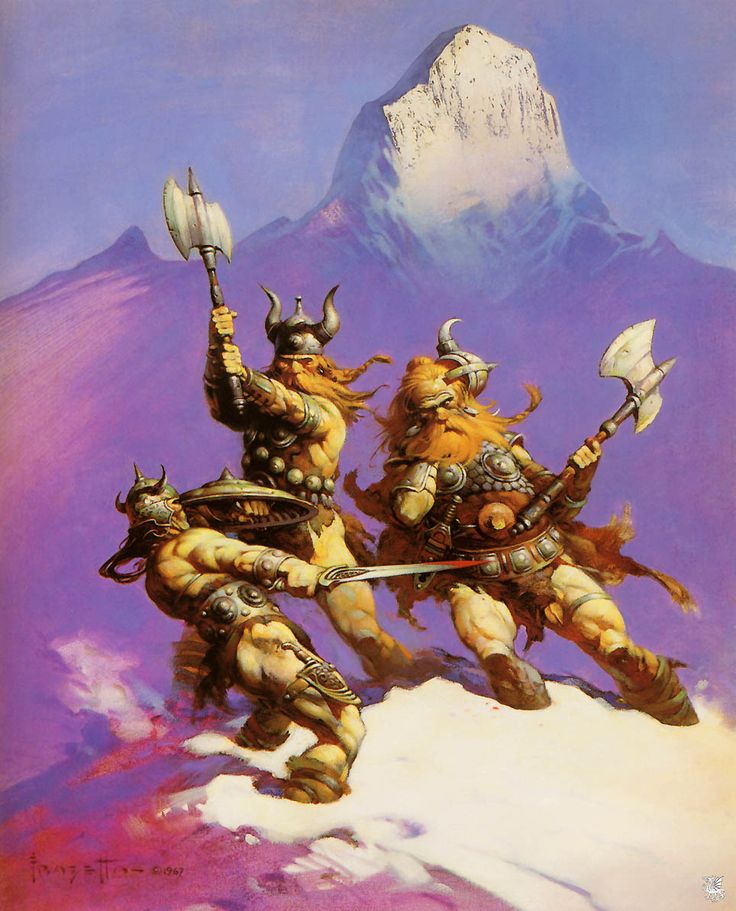 Here’s one you may have seen before. It’s Frank Frazetta’s illustration for Robert E. Howard’s Conan story The Frost Giant’s Daughter. Here is snow and ice depicted, as expected, in hues of light blue and purple. White, of course, the white value of the blue… but notice the contrasts that he introduces against the blue of the snow: The fiery orange of the frost giant’s hair, the orange and brown earth tones in their clothing, the warm colors of the skin of the giants and of Conan himself. Also the small but strong splash of deep red on the point of Conan’s sword. Look below the figures to the left, the last place the eye goes to when assessing the image… Here the purple gives way to an angry red color. 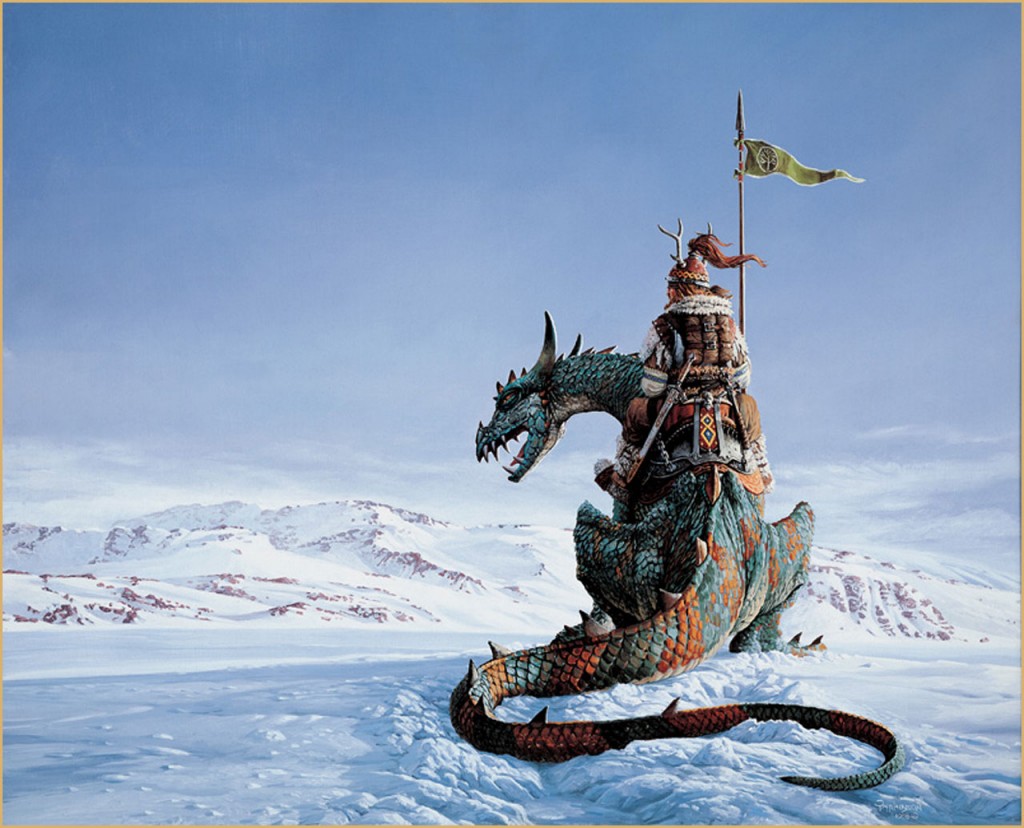 Take a look at Kieth Parkinson’s painting of a man riding a dragon. Here the whites and blues surround a small island of greens and reds and browns, as if dragon and rider are the only life in the picture, contained within a small space, surrounded by the icy waste. That there is wind is indicated by the unfurled banner at the end of the warrior’s staff and the fur trim of his helmet moved by what we can only assume is a chilly breeze. 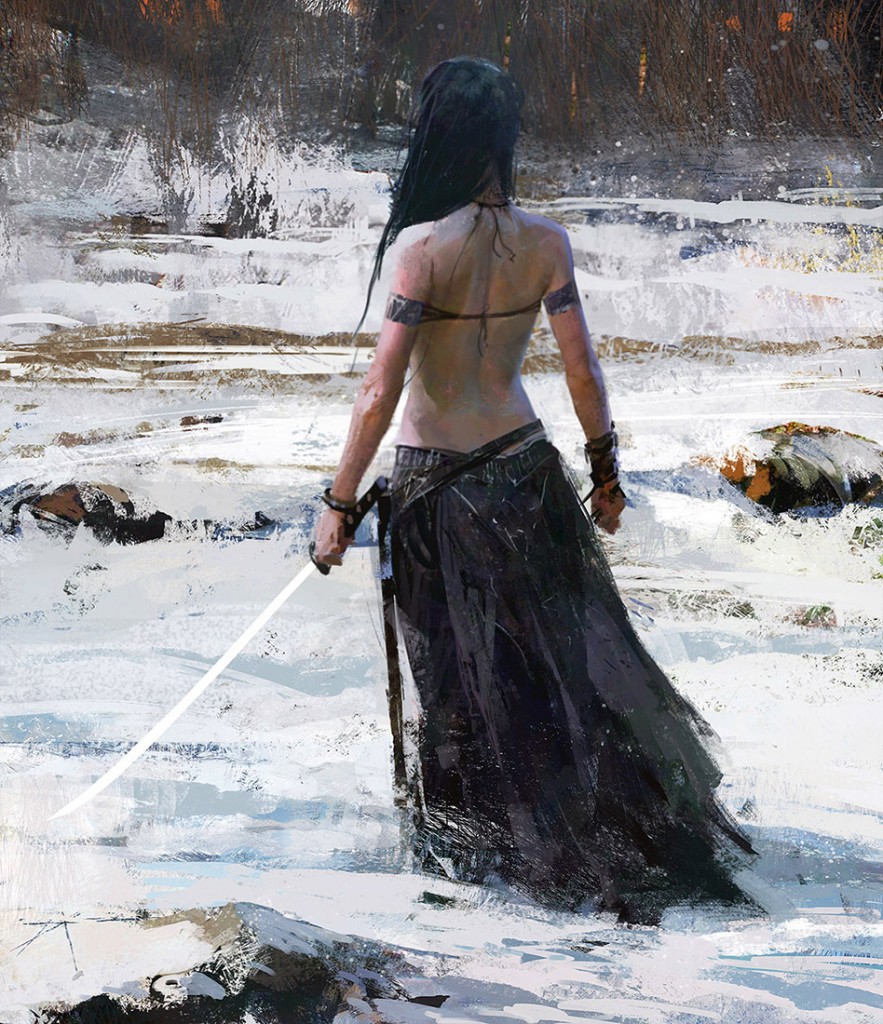 Here’s one by Maciej Kuciara. A woman stands in the snow holding two katanas. The colors palette at first seems limited to white and black with the contrast being the woman’s exposed skin which is given a subtle purple undertone to give it s feeling of reacting to the cold. It’s enough to make you shiver involuntarily. But look again. Underneath the snowy white background is a rusty red color. Mud, perhaps? But look up near the top of the image, where the dark, dense woods are. There it is again. It suggests a fire in the distance, perhaps as if the woods are on fire. There is the contrast that gives extra emphasis to the cold and chilly parts of the image. 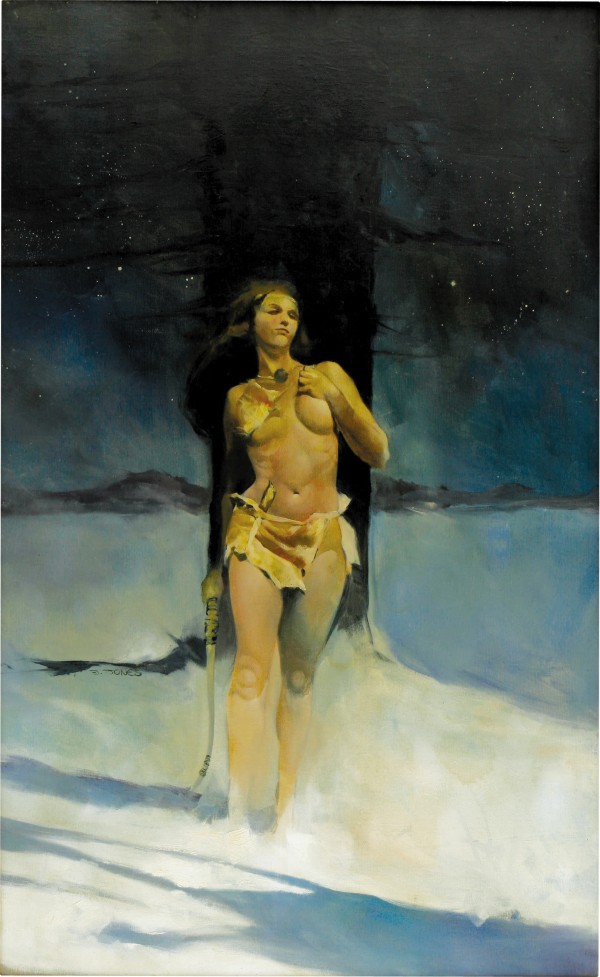 Here again is that warm orange skin tone contrasted with a dark and snowy surrounding. Jeff Jones masterful painting from 1971 gives us a dense and compact area of warm tones surrounded by the white and blue of the ice. The contrast is pushed even further by the dense tree trunk behind the figure. It is a black mass with cold fingers branching off (literally) into the dar blue of the night sky. Down below, the figure casts long blue shadows and her feet literally disappear into the white of the snow making us wince in sympathetic pain and wondering how many toes this poor woman will lose to frostbite before the night is through. 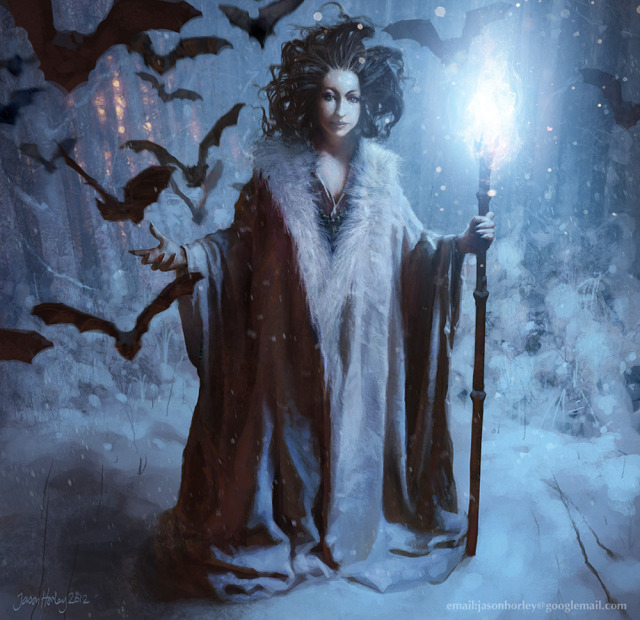 Let’s look at one more. Here is a winter witch from digital artist Jason Horley. Here the overwhelming color is blue white and black with the magical blue light from her staff looking almost like an electric light, casting deep shadows and turning her red robe a dark, muted burgundy. The flying bats provide splashes of black against the pale blue. But look to the background. Behind the trees is a warm orange glow. Is it fire? Is it the warm glow of a dwelling? Who knows? But it intrigues. It suggests the there is something more behind the mere snow and ice. Maybe it’s a way out?

When you are trying to get across the feeling of cold it is important to remember to give the viewer a contrast, a suggestion of the warmth that is lacking from the cold and snowy climate. Blues and purples and blacks alone will not do. An artist has to give the viewer a glimmer of the warmth that is missing from the scene. It is as if by showing just a bit of what is missing from the cold image, he or she makes the places where it is not: the snow, the ice, the cold blue of the sky, the bare black tree limbs, feel all the more cold in comparison.

Until next week, my friends, stay warm!