On Friday, 12-5, Amazing Stories experienced a series of outages.  Some data was corrupted (recoverable) and our SAN “experienced some issues”.  We are not sure if the problem(s) have been entirely resolved, so please excuse our technical difficulties.

Star Wars is now officially a glut on the market.  We think Disney is in serious jeopardy of turning folks off with Star Wars salt-n-pepper shakers, oven mitts, trash cans…what, no Star Wars condoms?

*The Doors: The End

We’re not as rational as we’d like to believe:  flaws in our reasoning affect our ability to address climate change

Science Reveals:  Our brains are mashups of male & female “parts” (first study of “sex differences in the brain”;  note to misogynists:  so far as your brains are concerned, you’re all girlymen.  and there’s nothing you can do about it short of giving yourselves lobotomies)

How To Suppress Disabled Fans 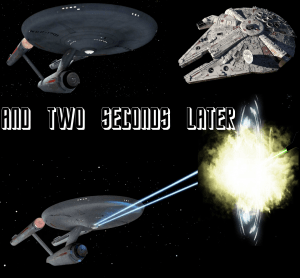 The Women of Gnome Press

You can’t be a scientist if you’re pregnant?

Every Star Wars Vehicle to Scale

Comic Book Stores Will be Destroyed for Independence Day II

Scalzi’s Holiday GIft Guides (this is one, there are others)

The Wreath of Khan

SFWA Author on the Love-Hate Relationship between Industry & SF

TED Talk:  What is RetroFuturism?

The Moon has become our Landfill

The 2015 RPGnet Membership Drive continues and we appreciate your support! We’ve already hit our core goal, which guarantees all members 8 PDFs at the start of the year. If you’d like to be part of this bounty (and support the site!), please go pledge to our drive now.

Among the great PDFs you’ll get are a pair of Pathfinder supplements:

The Lonely Lyrakien is one of Legendary Games’ Ultimate Plug-Ins for Pathfinder. It describes an NPC emissary of Lady Luck who can be used as an ongoing character in your games.

Dungeonlands: Tomb of the Lich Queen is a megadungeon of the sort roleplayers dream of. It’s got extensive background, leading into the sprawling Tomb itself. For high-level PCs only (16-18!). If you enjoy the 144-page dungeon, Savage Mojo also has tons more on the Dungeonlands setting.

As always, Christopher Cecil published another new edition of Fuzzy Thinking: “When An Army Turns Yellow …”.

Fred Furtado of Superseeds was also back with the third part of his ongoing series on a world of hypertalents: “The Boz, Part 3”. Outside of the pure superhero realm, there are some great story hooks in here for a pulp or modern action campaign.

RPGnet had a busy week on the reviews front, mostly thanks to prolific reviewer Antonios S. Be sure to check out:

TRO featured one thread last week that made yr. humble editor wish he had the power to delete threads from the site. Not because it broke any rules or featured an inappropriate topic, but because he worries that his players might catch on to one of his GMing tricks (please let him continue to believe that they haven’t already): “Ever Change Things to Match your Players’ Speculation?” Pop into this thread and see how this venerable technique can go both right and wrong.

If you’re tired of the ‘hack-and-slash’ part of the game, head over to “What works for a non-violent / low violence RPG?” and “Non-violent RPGs” and pick up some great tips on how to keep a game exciting without resorting to actual violence in game. If you’re getting tired of violence around the table, as opposed to in the game, you’re facing a different set of problems.

This week is also a great opportunity to highlight an area of the site that hasn’t seen much press here at the Newsletter: RPGnet’s Play-by-Post subforums. Yr. humble editor has participated in or GMed a number of PbP games at the RPGnet over the last few years, all of which have been great fun. The mod staff and poster base in the PbP forums work hard to keep games running and running well. Check out the Recruitment/Meta forum and see if there’s a game that looks interesting to you, or just take a spin through the Play forum and get a feel for how the games run!

Have a good week, everyone.

###
Time to dig out those stories – Far Fetched

Fables is open to submissions

Just a little News Flash! Got something good for you.

Gary Dowell, the editor over at Far Fetched Fables has just told me they are now open for submissions. Closing date is 1st January 2016. So… be quick, dig out those stories, read their guidelines and good luck! Far Fetched Fables might just be playing one of your stories in 2016!

And not forgetting StarShipSofa. Submissions will be open from December 14th to January 14th. Again, read our guidelines as they are different from FFF.

Take care and seen you next time. Sign up to the Submissions Desk newsletter to learn tips and tricks to keep out of the slush.

TIME MACHINE: (Don’t you hate it when the time machine is late?”

Our most popular posts of the past week

SPECIAL ANNOUNCEMENT: A DOCTOR FOR THE ENTERPRISE PRE-ORDERS