Not all heroes are good guys. Sometimes, and this is only on the rare occasion when it’s handled correctly, the hero can be the most heinous character, but still endearing enough that the reader can’t help but cheer for them. 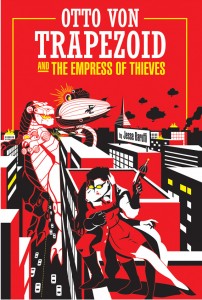 This is where Otto Von Trapezoid and The Empress of Thieves comes in. This epic adventure is written by the talented Jesse Baruffi and first published October 5, 2015 from Curiosity Quills Press (division of Whampa, LLC.). As the name implies, there are two main characters. What you cannot glean from the cover (which is awesome in and of itself from The Cover Lure) is that both of these characters are the archetypal portrayal of pure evil.

The overall story is compelling with just enough complex intricacies to keep the reader guessing, which is unique seeing that it also has its predictable moments. Though not as polished as Hitchhiker’s Guide, the humor certainly spans a similar expanse with a wide mixture of both subtle and over the top wit that those fans of might find recognizable. It’s as if Baruffi is trying to keep the readers on their toes with each turn of the page, and it works. But what truly holds this adventure all together is the colorful cast of characters.

First we are introduced to Otto Von Trapezoid, who plays the part of the mad scientist with a purpose. He believes that the people of Earth must see him in this conspicuous role if they are to take him seriously. With a long list of educational accomplishments and scientific achievements, Otto is determined to put his army of duly robots and powerful Quadrilateral of Doom space station to good use. What are his intensions? World domination, of course.

The readers are also introduced to the tall, elegant, and flawlessly talented Esmerelda Santa Monica. The offspring of a long line of thieves and criminals, Esmerelda lavished in the idea of self-importance when it came to corruption and wrong doing. The self-proclaimed Empress of Thieves had already built up a pretty sizable reputation. The thrill of the chase and a pride in alluding authority is what drives her.

When both of these seemingly caricatures of evildoers unknowingly decide to confront the UN, the international espionage organization known as SPARTA must pull the legendary Jake Indestructible out of retirement, and away from the alter where is about to marry the wealthy Countess DiFrancesco to battle the villains.

Villains. Otto and Esmerelda are clearly the villains. Yet, this awkward duo of antiheroes will somehow draw the reader in with their unique silliness, desire for world dominance, and combined determination to thwart the seemingly indestructable Indestructible. And when their budding romance blossoms as the action and adventure continues, that fine line between hero and villain blurs to the point where you become uncertain who you are supposed to pull for.

Otto Von Trapezoid and The Empress of Thieves is unlike any book you will come across. Author Jesse Baruffi has created a world of exciting and sometimes over the top characters in a world where anything can happen and probably will. The question is, who will you cheer for?