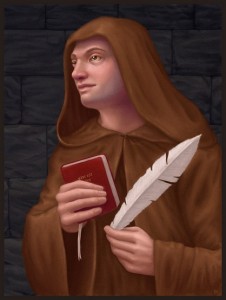 Caedmon is the name of the earliest known poet in the English language. An Anglo Saxon from Northumbria, Caedmon was a monk who cared for the animals at the monestary of Streonaeshalch, today known as Whitby Abbey, during the abbacy of St. Hilda, sometime between 657 and 680 AD. Originally ignorant of the “art of song” he learned to compose one night in a dream, according to the 8th-century historian Bede. He later becam an accomplished Christian poet.

Cædmon’s only known surviving work is Cædmon’s Hymn, the nine-line alliterative vernacular praise poem in honor of God which he supposedly learned to sing in his initial dream.

So, why am I talking about a seventh century Christian poet? I’ll get to that in a minute.

An audiobook is a recording of a text being read aloud, sometimes by the author, sometimes by an actor. These are usually sold in either CD format or as a downloadable audio file. A reading of the complete text is noted as “unabridged”, while readings of a reduced version, or abridgement of the text are labeled as “abridged”.

Spoken audio has been available in schools and public libraries and to a lesser extent in music shops since the 1930s. Many spoken word albums were made prior to the age of videocassettes, DVDs, compact discs, and downloadable audio, however often of poetry and plays rather than books.

One such company was called Caedmon Records.

Named after the earliest known English poet, the one I talked about at the top of this post, Caedmon was a pioneer in the audiobook business. It was the first company to sell spoken work recordings to the public and has been called the “seed” of the audiobook industry. 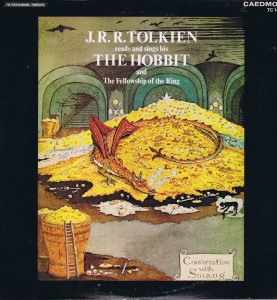 Formed in New York in 1952 by college graduates Barbara Holdridge and Marianne Roney, the company’s first release was a collection of poems by Dylan Thomas as read by the author. The B-side contained A Child’s Christmas in Wales which was added as an afterthought but this recording went on to become one of his most loved works, and launched Caedmon into a successful company.

This was back in the days of the vinyl record, of course and it was always a special, almost magical thing to have and to listen to one of these recordings. To hear the author of a famous work reading selected passages aloud was thrilling. Most particularly if it was J.R.R. Tolkien.

I had the recording as a teen and it was absolutely marvelous to hear the words from The Hobbit read by the author himself. His “Gollum” voice was hysterical and the songs –yes, songs – Tolkien actually sings some of his poetry to old tunes. He even reads some Elvish poetry! 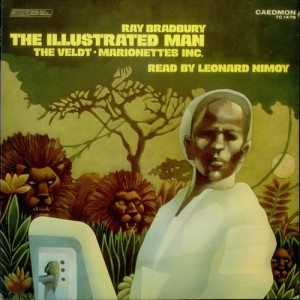 The recordings can be found today fairly easily on Youtube if one is so inclined to look, but having it all on one vinyl album, listening to it quietly along with the scratches and pops that were part and parcel of the vinyl experience is a wondrous experience that I would not trade for anything.

Caedmon released other fantasy and science fiction recordings as well and they were among my most treasured albums. Ray Bradbury: The Illustrated Man – The Veldt and Marionettes Incorporated read by Leonard Nimoy which featured album art by Leo and Dianne Dillon was one of my favorites. Again, you can find the recording on Youtube, but the vinyl album was special to me as a young teen as well as Henry Kuttner’s Mimsy Were the Borogroves read by William Shatner. The album featured artwork by Frank Freas and is a truly wonderful recording.

There were many other fantasy and science fiction recordings released by Caedmon released through the years and listening to them was an experience that I can only describe as magical – magical in the same way that learning to compose in a dream is magical.

Caedmon Recods were eventually purchase by Harper Collins Publishing where they became part of Harper Audio which is still busy producing audioboks to this day.