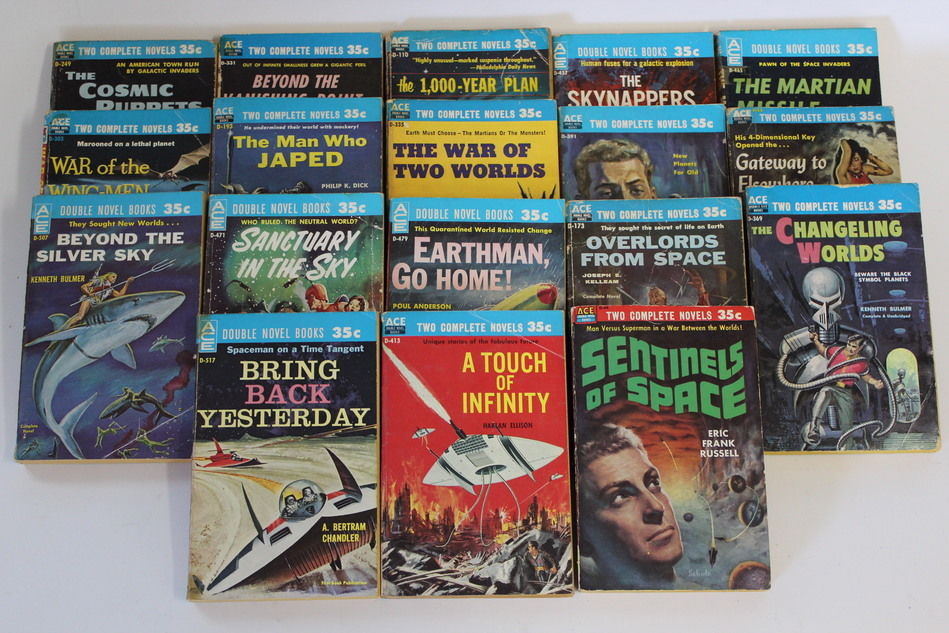 What’s better than one of something?

Two of something, of course! 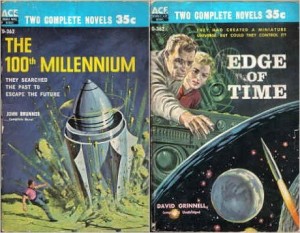 Most science fiction readers of a certain age remember with a great deal of fondness the series of Ace Double Novels which were released from 1953 to 1973 and were a distinctive part of the science-fiction community throughout those two decades.

The Ace Double novels format helped to launch the novel careers of a number of authors, from Philip K. Dick to Ursula K. Le Guin to Samuel R. Delany, in addition to a number of other popular authors in the field, such as A.E. van Vogt, Margaret St. Clair and Leigh Brackett.

The books were an innovative entry in a brand-new publishing world, one that found both considerable staying power and a platform for publishing a high volume of science fiction. The huge number of stories published allowed for something great to happen: Talented authors with interesting stories to tell broke into the field, allowing for their own voices to shape the genre as they continued to find success. Like the pulp magazines that preceded them, the Ace Doubles had their own lasting impact on the future of the genre. 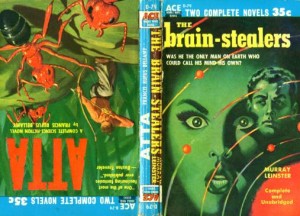 From the start, Ace began an innovative approach to their novels by printing them Tête-bêche style. A tête-bêche book has the two titles bound upside-down with respect to each other, so that there are two front covers and the two texts meet in the middle (sometimes with advertising pages in between). This format is generally regarded as an innovation of Ace’s although it wasn’t. This style of binding was common in the 16th and 17th century. Nevertheless Ace published hundreds of titles bound this way over the next twenty-one years.

Books by established authors were often bound with those by lesser-known writers, on the premise that this would help new writers gain readers. The main drawback of the “Ace Double” format was that the two books had to fit a fixed page length (usually totalling between 256 and 320 pages); and although the story length ranged from from roughly 30,000 to 55,000 words, it was often the case that one, and sometimes both novels might be cut or revised to fit. Despite the tag “Complete and Unabridged” on the cover, books so labeled were sometimes still abridged. Still, they provided a convenient outlet for stories of awkward lengths; too short for a single book but too long for a single issue of a magazine. 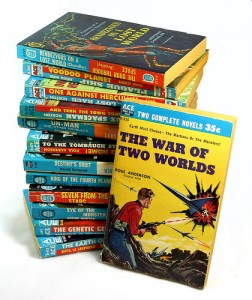 Despite that many authors often found that the released versions of their stories were significantly edited for length. Constrained by the limits of paper and glue, the novels necessarily had to be short, with the entire volume rarely breaking 100,000 words. Authors such as Isaac Asimov and John Brunner noted their outrage at the unauthorized butchering of their novels, which often impacted the stories that they were trying to tell.

Some important titles in the early series novels include William S. Burroughs’s first novel, Junkie (written under the pseudonym “William Lee”), as well as many novels by, Robert Bloch, Harlan Ellison, Harry Whittington, and Louis L’Amour, including those written under his pseudonym “Jim Mayo”.

The last Ace Double in the first series was John T. Phillifent’s Life with Lancelot, backed with William Barton’s Hunting on Kunderer, issued August 1973. Although Ace resumed using the “Ace Double” name in 1974, the books were arranged conventionally rather than tête-bêche.

The Ace Double novel was an example of an innovative format capturing the fancy of the reading public and effectively changing the landscape of the publishing industry. Indeed the publisher behind the Ace Double novels, writer and unabashed science fiction fan, Donald A. Wollheim, would have a profound impact on the publishing industry. He not only helped put Ace Books on the map with the double novels but after leaving the company in 1971 would go on to found Daw Books, the first mass market specialist science fiction and fantasy fiction publishing house.

In this age of the electronic book, would that such an innovative idea be able to take hold today? What form it would take I cannot conceive, but it would be bound to make somebody’s fortune and, perhaps, have as profound an effect on today’s publishing reality as the Ace Doubles did in their time.