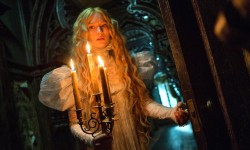 If you look at the most successful suspense films they have worked by making either the protagonist or the audience (or preferably both) questions the character’s grip on reality. Is Norman Bates being persecuted by his overbearing mother or is he crazy? Is Hill House really haunted or is Eleanor Lance cracking up?

It comes with a man-versus-himself conflict built in and requires a moody atmosphere, giving license for the tropes of the suspense genre to marked out without feeling hackneyed. And it’s a natural for the ghost story where by design the characters are dealing with something unknown and unknowable.

Unfortunately, despite all its mood and ghosts Crimson Peak, as young Edith Cushing (Wasikowska) keeps reminding everyone, isn’t a ghost story. It’s a story with ghosts in it, and that is a very different thing.

Ghosts themselves have been a part of Edith’s life for almost as long as she can remember – since the time her dead mother appeared to her to warn of a nightmarish future – so long in fact that she doesn’t give them much thought. Which is the first and most persistent problem Peak has: the ghosts don’t matter to the point of view character. 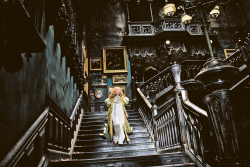 It’s not that she doesn’t find them scary (when she’s aware of them) but ultimately they have no lasting impact on her or us because they have little connection to her. As Edith also keeps telling people ‘ghosts are a metaphor for the past’ but they have nothing to do with her past.

They are instead indelibly linked to the dark and mysterious Sir Thomas Sharpe (Hiddleston), a beggar noble on an eternal quest for money, desperate to restart his dilapidated clay mines and rebuild the family fortune.

Feeling the pangs of love for the first time Edith leaves behind everything she has ever known to join Thomas and his sister (Chastain) in their ancestral home in England … only to discover that she may have left the past behind but it has not left her. But it’s not her past.

Focused on finishing her first novel and making her relationship with the recalcitrant Thomas work, Edith is invariably focused on the future and rarely talks about what’s behind her even (and especially) after her father (Beaver) is brutally murdered. Rather, all of the specters Edith encounters are tied to the Sharpe’s who have no idea they exist and thus take no part in the metaphor or suspense.

The ghosts are trying to clue Edith in about something which accomplishes little but absolving them of being metaphor or monster by becoming direct elements of the plot and negating much of their use in suspense by showing Edith is both sane and needed for something beyond terrorizing. Imagine if Jacob Marley haunted Scrooge’s neighbor trying to get him to convince Scrooge to change his ways rather than do it himself – it doesn’t have quite the impact. 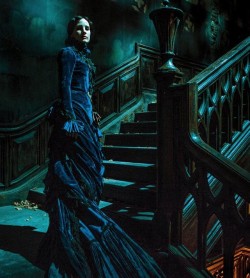 That requires a steady hand holding multiple elements in balance because if any one thing falls the entire edifice comes tumbling down. Co-writer/director Guillermo Del Toro (Pacific Rim) has certainly proven himself in the genre over the years and yet here his material gets the best of him.

The craft and moodiness are certainly there – Thomas Sanders design for the titular manor house comes alive as a fifth leading character among which Dan Laustsen’s camera lovingly lingers – but with the suspense element off aim it is left to the characters to keep everything together and they’re not well designed enough for that.

Only Edith’s father is interesting as he balances his fatherly devotion with the stern outlook on life he’s been forced to develop. Beaver is also the only actor who can pull off Peak’s intentionally old fashioned dialogue, but alas it is clear from the beginning that he will not be in the film long.

By comparison the romance between Edith and Thomas – which is necessary for any part of the film to engage the viewer – never blooms, stifled by the same restraint of sentiment and a need to continually stop and focus on the ill-cast Chastain.

What’s left then is neither a ghost story nor a romance but a story with ghosts in it and a story with romance in it and neither notion used to particular effect. It is fantastic looking and Del Toro has lost none of his talent for putting together a compelling scene but in total it lies inert. There is no question as to whether the fantastic elements are actually happening or why or even what the Sharpe’s true motives are and without that ambiguity there is no suspense.

And once suspense is lost the central conflict is lost with it, leaving nothing behind but a characters acting not like madmen but idiots, producing a lot of sound and fury and meaning nothing.

Those seeking bloodfests will be disappointed, but a great many others who still like vampire fiction will enjoy Darkly Dreaming.

With the Witcher, Andrzej Sapkowski created one of the most memorable characters in modern fantasy.

Game of Thrones – Back to the Start

The Adaptive Side of Video Gaming

AMAZING THINGS: A Doctor for the Enterprise Goes to the Printer