Wriixka awakens one fine crimson sunny morning to discover that she has grown wings. 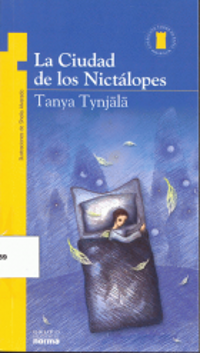 Ok, Here I am, daring to share the first chapter of my novelette translated into English. This is a novelette published in paper by NORMA. It is quite popular among Latin American Schools and of course the children ( as the mail they send me makes me believe), One of the projects with my Patreon experience is to translate the whole and to put it in Amazon as an e-book (because there were no e-books when I made the contract, I have the rights for e-books). So if you are interested in reading the rest, go to my Patreon profile.

And of course, consider this is a young adults science fiction story. And finally thank you to Diane Severson for her first reading and wonderful advice.

THE CITY OF THE NOCTIVIDENTS

A forbidden dream woke Wriixka up with a jolt that day. The words chants and colors swirled inside her head although she was still half asleep. When she tried to entrap them, she realized she did not know what their meaning was and that they had disappeared into the sheets. There was, however, a single and vivid memory that refused to go away: a light that shone from beyond the mountains. She sat on her bed, panting. She felt an unusual shudder on her spine as she patted the sweat from her forehead. The maddening awareness that this part of her body no longer belonged to her came as a shock. As the last traces of her dream drifted away, she smiled at the thought of how absurd the idea was. Noticing that her back was still intact while she recovered from her early morning rush, Wriixka busied herself with what she had to do. But she immediately stopped, stood up in a flash, stared at herself in her six-face mirror, and saw them for the first time. They were small and white. She did not dare touch them but they seemed very soft and were made of feathers. Yes, she had grown two wings during the night!

It dawned on her that instead of sleeping through a forbidden dream, she was rather experiencing the forbidden. She looked towards the window. The crimson sun had yet to come out. It was still early in the morning. She sat on the edge of her bed, the one that could immediately and intelligently transform into a sofa. And cupping her face with her hands, she asked herself, “What should I do now that I, too, am an Outcast?” She could not afford to remain at Nº 4 Living City. She knew very well that creatures with monstrous wings were not welcome within the Living City Existential Complex. She could even be obliterated if she chose to stay.

Since the start of the Epoch of Peace, when the wisest scientists of the world created the living cities, strange mutations started to appear in some of the citizens. These citizens grew wings! It was soon established that these changes were not only physical. The winged creatures had the irritating habit of disturbing the silent peacefulness of the cities with their shrill laughter for no apparent reason. They did not want to comply with their job quota, arguing that they would want to perform activities that were more in line with their qualities. And worse, because of their wings, it had become such a nuisance to wear their clothes (which were identical and worn by everyone in the city without exemption) that these people would go around half-naked, dangerously provoking the imagination and emotions of other citizens.
A living city is enabled to provide everything to satisfy the littlest necessities of its inhabitants for as long as they follow a certain set of rules. Why then did the winged creatures refuse to follow these rules? Little effort was required to carry out the work in exchange for the comforts of life. But the winged creatures chose not to do it. They detested staying in their chambers. They did not want to ingest their food. In other words, they did not contribute anything to the balance of the living city.

Such a situation became so unbearable that the Founding Council of the Living City Existential Complex decided to exile the winged creatures under the penalty of death. If truth be told, they knew very well that such punishment is almost the same as condemning the unhappy lot to die a certain death. Everybody knew that life outside a living city is impossible. And yet all these measures did not prevent new cases of mutation from developing. Wriixka was proof of this.

After analyzing the problem from different angles, the young woman reached the conclusion that perhaps it would be more convenient to cut her wings off… but she was not sure if cutting them was like cutting off one’s hair… or cutting one’s arm off, for that matter. A pleasant light woke her up from her meditations. It was a cheerful ray of crimson sun that had come out and was shining beside the icy pink sun.

Because of the proximity of the two stars, she intuited that she had been there for quite sometime. She stared at her clepsydra ring as she put it on, and started to dress up hastily so as not to be late for school. All dressed up, she looked at herself in the mirror again. The mirror’s third face carried the reflection of the small bump on her back. With a blush, Wriixka looked for another thing to wear. She later on thought that such move would provoke suspicion and instead decided to get a long and delicate scarf (which had gone out of style two seasons ago) and wrapped her torso up with it. Her wings caused some discomfort when they were bound tight to her body, but they at least could no longer be noticed from beneath her clothes.

Before leaving her room, she again stared through the window. She thought she saw some strange lights flickering beyond the mountains… No, that can’t be right. She must be hallucinating because of all the weird things she had been encountering since morning. There is absolutely nothing beyond the mountains. Everyone knows that.
And how about the idea of cutting off her wings? A bothersome nudge hit Wriixka in the stomach at the thought of it. She understood at that point what really had transpired. Would she honestly want to keep them? Why take all that trouble to hide them? Wouldn’t it be better to visit the nearest Distention Center, go down to the Re-equilibration Ward, and simply say, “Cut off my pesky wings.” What should she do? As she neared the kitchen to grab some breakfast, she told herself that in reality, the most sensible thing to do was to talk (although without directly elaborating on the problem) with the only person who knew something about the matter. The nudge in her stomach disappeared when she saw him seated and ingesting his food before heading off to work. Only he could understand what Wriixka was going through and perhaps he could suggest to her what to do. Wriixka slowly walked towards her dad and placed her hand on his shoulder.

All Our Wrong Todays is one of those rare alternate history books in which our present is the dystopia compared to the alternative. And it’s a lot of fun!