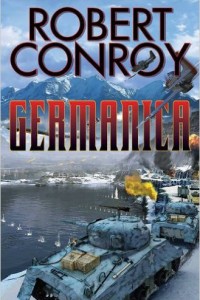 The passing of Robert Conroy at the end of 2014 was a blow to the alternate history community as he was one of the most prolific authors in the genre (next to Harry Turtledove). Although some have criticized the late author for his implausible alternate histories, many people have credited him with introducing them to alternate history. Having never read any of his novels, I really couldn’t comment on him as an author, but I made it a point to pick up one of his books as soon as I could since he was obviously important to many alternate historians. So when Germanica came out and it was suggested as a possible candidate for a 2015 Sidewise nomination, I decided to check it out.

The story begins with the Battle of the Bulge. Once it became clear that Germany would be unable to force the Allies to the negotiating table, Hitler orders the construction of the Alpine Redoubt as a last ditch attempt to save the Third Reich. Albert Speer works his magic and creates tunnels in the German Alps to house the elite of Hitler’s government and the last of the German army to defend them. The plan is simple, hold out long enough until the Allies become tired of war and negotiate peace, allowing for the Nazis to retake control of Germany again in the future. Joseph Goebbels, as the highest ranking Nazi officer at the redoubt, finds himself the new Fuhrer after Hitler kills himself and declares a “Republic of Germanica” that announces its independence from Germany. Meanwhile, American politicians and generals fear that they may not be able to take the redoubt as they only have inexperienced troops nearby to attack who are more interested in going home than risking their lives. Meanwhile, their is a growing anti-war movement in America, while Switzerland is warning the Allies not to bomb near their borders. From the eyes of Americans, Germans and others, we get a glimpse at the alternate lead-up to VE-Day.

In terms of alternate history, Germanica is rather weak. From what my preliminary research says, things like the Alpine Redoubt and Werwolf (which is also carried out in this alternate history) were more propaganda then real military plans. The purpose of the Alpine Redoubt it seems was just to divert Allied forces from other fronts (and it was successful in doing that) and never really had the support of the Nazi high command who considered talk of such a program as defeatism. Werwolf did get off the ground…sort of. The werewolves were originally planned to be highly trained commandos who would cause chaos behind enemy lines, but as soldiers and equipment were needed elsewhere, they became nothing more then Hitler Youth members instructed to kill themselves and take as many enemies as they could with them.

How numerous the werewolves were is debatable. Some historians liken them to the Iraq insurgency while others argue most of the attacks credited to them were probably just diehard Nazis working alone and not part of any post-war organized resistance. So its unlikely the Nazis ever took either of these ideas seriously and, even if they did, I find it implausible that they could have made realistic attempts to carry them out as late as January 1945. Furthermore, Germanica focuses mostly on the short-term changes of such a desperate attempt to stave out utter defeat, without looking into the mid- to long-term consequences of how history could change (except for the implication that a few more Nazis were either captured or made it to Argentina).

What really bothered me about Germanica, however, was how badly it was written. For example, take a look at this quote:

Ernie Janek had gone for an evening’s walk. He was take a break from the intense physical training at the embassy and decide that a beer was in order. Previously he’d gone to a tavern a few blocks away, and decided that a visit to a new one was in order.

I can think of a few English teachers who would knock a few points off for using such a repetitive phrase and there were many instances of that and other grammar/spelling errors throughout the book that I won’t bore you all by showing. I will say though that this wasn’t a review copy. I purchased this book, which is being sold right now as is, so Germanica can’t hide behind the “its a review copy” typo defense.

There are other of odd bits of writing to talk about, such as:

Each young man had a strange patch on his shoulder. It was a stylized animal face with flaming red eyes…”I sincerely hope I’m wrong, but it sure looks like a nightmare version of a werewolf.”

That is kind of a stretch isn’t it? The only thing the reader was told was that it was an “animal face with flaming red eyes”. Why would the character jump to the conclusion that it is a werewolf instead of just a wolf? If it was a wolf-like creature on hind legs, then yeah, I would see a werewolf too, but if the only thing I see is the face I’m going to go with it being a wolf. Also why “nightmare version of a werewolf”? Is there a happy-go-lucky version of a werewolf I am not aware of?

There were also plenty of the dreaded “As You Know, Bob” moments. Take this scene, for example, where Goebbels promotes a loyal SS officer:

“It has occurred to me that you do not have enough rank to do your job properly. Therefore, I am promoting you to the temporary rank of SS-Brigadefuhrer. I understand it is equivalent to being a brigadier general in the American army.”

Why did he say that? Goebbels and the officer should know that, so there was no reason to say it. Even if the SS officer did not know that, who cares? It was completely unnecessary. The reader may not know it, but that’s no excuse for such clunky dialogue. In fact a lot of the dialogue in Germanica was weirdly stilted (“I have other reasons for going with you and they are important and personal“) and not what I would expect from an award-winning author.

Then there are the odd sex scenes scattered throughout the book, including many brutal acts against women or descriptions of them. It was actually kind of uncomfortable and not handled well. The worst scene, however, was just a discussion of rape between a son and his parents who were hiding out at the Redoubt. Here are a few choice lines.

“And don’t forget, I did rape and enslave that Jewess, Lena. If she’s still alive, she could testify against me.”

Gustav laughed harshly. “Inert and as passionate as a large piece of meat. You didn’t miss much…”

“Yes, and by the way, what does your sister think about this?”

Anton laughed. “My precious little sister is too busy screwing her brains out with that Hans Gruber boy who think he’s a Werewolf”.

Who the hell talks like that to their parents or their kid? I know they are Nazis and the bad guys, but this doesn’t seem realistic at all. These are comic book villains, not real people. It was just ridiculously silly. I couldn’t even take it seriously.

Because I know Conroy has a lot of fans I just want to state I am not trying to attack the author personally. Germanica did have its moments. The aforementioned Lena character was likable and had a good story arc, while I thought Conroy did a good job capturing the personality of Harry Truman. Additionally, while I did feel the story had a lot of similarities with Harry Turtledove’s The Man with the Iron Heart, it lacked the Iraq War political metaphor, so it gets points for that. More importantly, this reads more like an rough draft of a story that hasn’t been looked at by an editor. To be fair, maybe that’s exactly what this book is. It came out after Conroy’s death and the editors at Baen could have been unable or unwilling to make changes to the copy they had. If that’s the case, shame on them for publishing something with Conroy’s name on it that wasn’t ready to be published. If not, then I really don’t see the appeal of Conroy.

Perhaps my first forway into the works of Robert Conroy should have been a book other than Germanica. Many people have recommended some of his earlier works to me, but it may be a while before I take a look at them. So my final thought on Germanica is that its a bad book, but I was entertained by it in a “so bad, its good” kind of way. Although there were plenty of times I wanted to stop reading, I felt compelled to finish just to see what crazy thing Conroy would write about next. So if you want to read a really absurd alternate history, check out Conroy’s Germanica, but I can think of several other books I would rather you read first instead.

Review: Locke and Key by Joe Hill and Gabriel Rodriguez

There’s all kinds of new comic horrors hitting the stands these days. Here’s an introduction to just a few.

There is a lot of fun to be had in reading Unidentified Funny Objects from UFO Publishing, the seventh collection of humorous genre fiction edited by Alex Shvartsman.