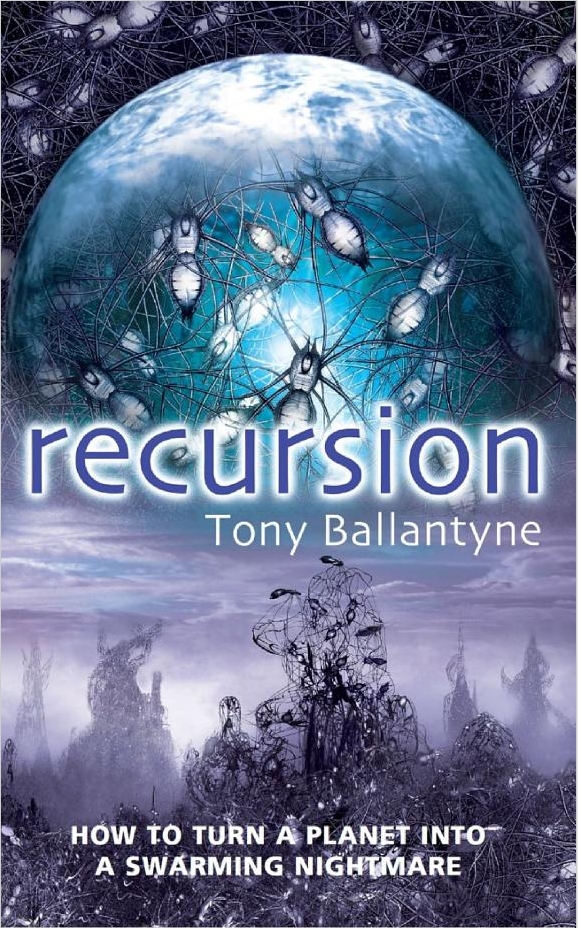 Recursion, Tony Ballantyne’s debut novel, was originally published in 2004. It became the first volume to The Recursion Series, which also includes the novels Capacity and Divergence, as well as several stories collected in Stories From The North Road. It does however work well as a stand-alone novel. You can read the book and have a complete experience without going on to the sequels.

Now, after a seven year break, in which he has been working on other projects, Ballantyne has returned to the world of Recursion with additional, as yet uncollected stories. With the author’s Dream Paris out next month, a sequel to the excellent Dream London, it seems like a good moment to take a look back at the book which started Ballantyne’s inventive and distinctive career.

Recursion is structured with chapters rotating between three different sets of characters in three different times. In the England of 2051 every last move is monitored by the benevolent, stifling Social Care. Eva has an escape plan, though soon her only hope lies with Alison, Katie and Nicolas, three other self-professed “loonies” in a rundown mental institution where everyone is concerned about the Watcher… Just because you’re mad doesn’t mean you shouldn’t be paranoid, especially if you keep seeing the ghost of the brother you never had.

Australia, 2119 and Constantine is another sort of ghost; a corporate agent for one of the five companies behind the first Von Neumann Machine-built city, able to slip unnoticed through the world wide surveillance web. His assignment is designed to culminate with three meetings in that city. Yet while Stonebreak is rotting from the inside Constantine is focused on the Mars Project, the development of Warp drive technology and the trustworthiness of Artificial Intelligence. Perhaps the pressure is getting to him, because he has red, white, blue and grey personalities in his head and parts of the sky keep going missing.

91 years later Herb is caught by Robert Johnston of the Environmental Agency, having has accidentally ruined a planet with a private Von Neumann Machine experiment. Offered a Hobson’s Choice, Herb finds himself assisting Robert in a surreal war against the Enemy Domain, an expanding sphere of machine intelligence rapidly heading Earthwards.

Of course connections are gradually revealed between the three stands, and the title is apt for there are plots within plots to a dizzyingly labyrinthine degree, making Recursion a remarkably ambitious first novel. Recursion is about many things, not the least of which is the nature of identity in a future where anything is increasingly possible. To get a flavour of the work think of The Matrix (or Daniel F. Galouye’s Simulacron-3) as scripted with the deadpan absurdist humour of Douglas Adams, then remix with the Australian dislocations of Terry Dowling and the mind-spinning speculations of Greg Egan.

Ballantyne’s plotting is stunningly impressive, the story unfolding with clarity, precision and a powerful imaginative vision, ideas which could have resulted in the novel being expanded to three times its length are worked with concision into the narrative without a hint of waste. And there are some fine ideas here, from the implications of the drug MTPH to speculations on the Fermi Paradox.

There’s scope too, from Eva’s world, not so far removed from the dour Britain of a Christopher Priest novel, to the burning chrome of Australia a century hence, to the epic scale of a chillingly realised and surreal interstellar war fought by vast inhuman intelligences. Add some welcome very British humour and memorable characters – not least the charming, highly mysterious Robert Johnston – and the result is exceptional.