In this week’s viewing: Charlotte and Rokka uncork fantastic new powers, and more!

Before you ask, no, there really wasn’t a Gatchaman Crowds episode this week, due to some vagary of the Japanese TV schedule. It’ll be back next week. 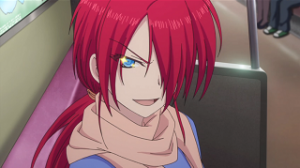 Charlotte #8 – Last week’s wanderings have had zero net effect on Yū, as the cycle of school life resumes. But hey, the writing’s jumped back up in quality, so I won’t complain.

After strenuously trying to avoid anything resembling romantic activity with Nao, Yū jumps at the chance to try to impress her when he finds himself escorting her favorite singer around. Nao turns out to be disappointingly resistant to celebrity worship, leaving Yū on his own to spend most of the episode with the most fascinating character in this series so far.

Much is almost said about Sara Shane. The peculiar effect she has on people with psychic powers, which was already mentioned a couple episodes ago, strongly hints that she has powers of her own. The scene with Nao’s brother practically confirms it. But when she talks about having been through the pop idol cycle once already, that implies that she’s now past the age where people are supposed to lose their powers.

I said at the beginning that we’d eventually see someone who kept their power into adulthood, didn’t I? Sara seems to say that she traded her eyesight to keep her psychic ability. Since this is Yū’s story, then he too may have to face a similar choice. 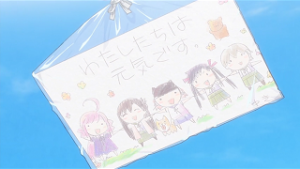 SCHOOL-LIVE! #7 – For a moment there, Yuki does seem to be aware that Megumi is dead. Being aware that she’s gone is another matter. Even if she can accept that Megumi isn’t physically present, she has to keep believing that the teacher is there in spirit.

But Yuki once again comes up with an idea that turns out to be useful. In sending out messages, even if they’re not exactly on topic, the club is announcing that they’re here and they’ve survived. Just what they ought to be doing if they want to get rescued. (If anyone is out there to try to rescue them.)

But meanwhile, winter will be coming, and Kurumi and Yūri grimly contemplate how they can survive that. Will it be possible at the school? 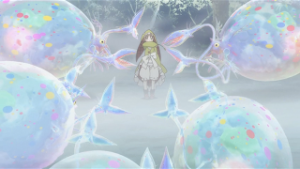 Rokka: Braves of the Six Flowers #8 – I see now how this show is reaching for the broadest audience possible. To break up the stretches of theorizing, Adlet will have to fight every one of the other heroes before definitively crossing them off the list of suspects. Okay, then!

So first he has to fight Hans and nearly get killed establishing that neither of them is the fake, and next up is a big fight with Chamot, whose power lives up to absolutely every ominous thing that’s been said about it. Also, we learn that there is some seriously weird cuisine wherever she comes from.

On the premise that the demons can’t duplicate the heroes’ power, it’s now proven that Chamot is, at least, not a demon in disguise. (Unless we learn next week that it’s all been an illusion.) If she turns out to be a willing assistant to the demon cause, everyone could be in serious trouble, but I’m confident that next week the Strongest Man In the World will come up with a clever trick to defeat her and an explanation of why she’s genuine.

Inasmuch as the PLAN had any discernible war aim – it was the extermination of purebloods. The PLAN slaughtered them by preference, favoring targets where pureblood populations were known to reside…

For the past few weeks, we’ve been looking at the current state of the horror industry. Let’s now turn back the clock, to find some classic screams: Amicus Productions was a small-budget film production company, based out of Shepperton Studios in England. It was founded by American screenwriters Milton Subotsky and Max Rosenberg, who moved […]

Book Review: Another Girl, Another Planet by Lou Antonelli

Review: At the Mountains of Madness by HP Lovecraft