Allowing the unconscious to express itself, surrealism resolves the contradictory realms of dream and reality

Surrealism is a cultural movement that began in the early 1920s. Originally only a literary movement, the surrealists eventually began to include artists among their ranks. The aim of the surrealists was to “resolve the previously contradictory conditions of dream and reality.” Artists painted unnerving, illogical scenes with photographic precision, created strange creatures from everyday objects and developed painting techniques that allowed the unconscious to express itself.

If you want to see surrealistic paintings you usually have to go to an art gallery. If you want to see science fiction or fantasy illustration, you only have to go to the movies or visit the SF and Fantasy section of your local library or book shop. Fantasy and science fiction illustration is kind of the workaday, pragmatic poor cousin to the rarified art form that is surrealism. But the lines between these two disciplines are blurred on a regular basis.

Take the work of Peter Ferguson. 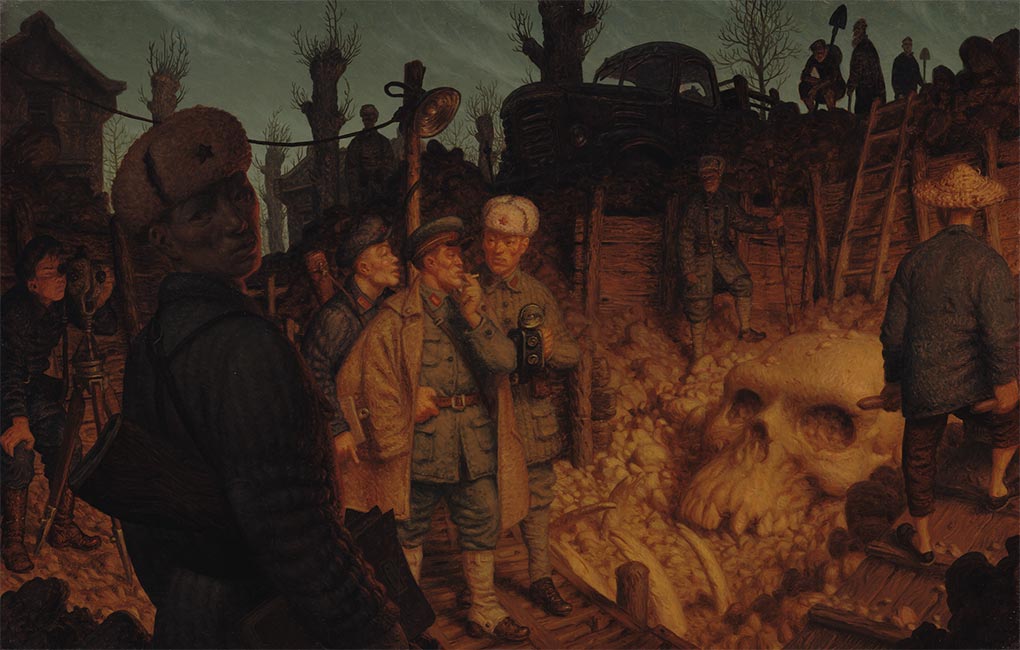 Peter Ferguson was born in Montreal, Canada in 1968. He set his sights on an illustration career after seeing the movie Star Wars, deciding that he would like to draw spaceships. After graduating from the Ontario College of Art and Design in Toronto in 1992, he began his career as a professional illustrator, using oil as his medium of choice.

Peter’s client list includes Marvel Comics, The Royal Shakespeare Company and The Wall Street Journal. His work in illustration is as workaday and as pragmatic as you can get. 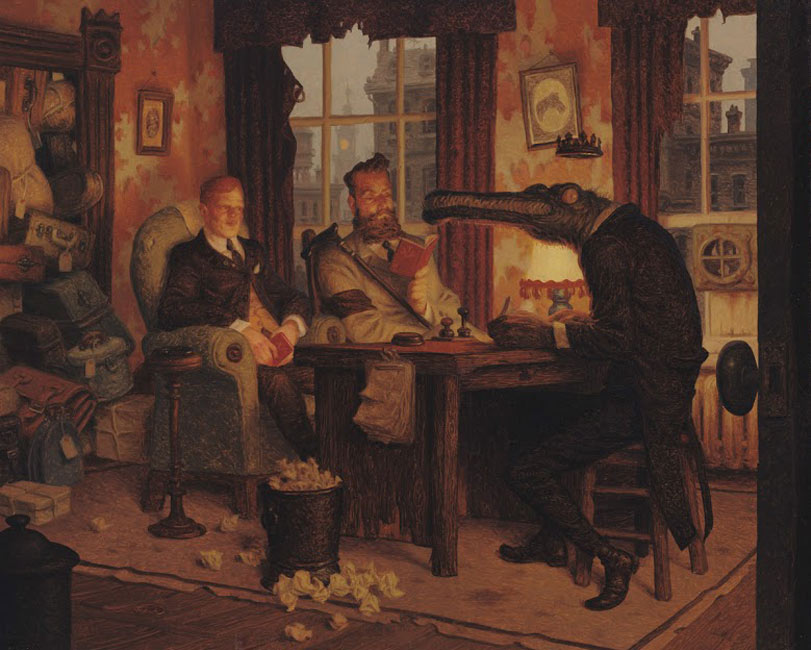 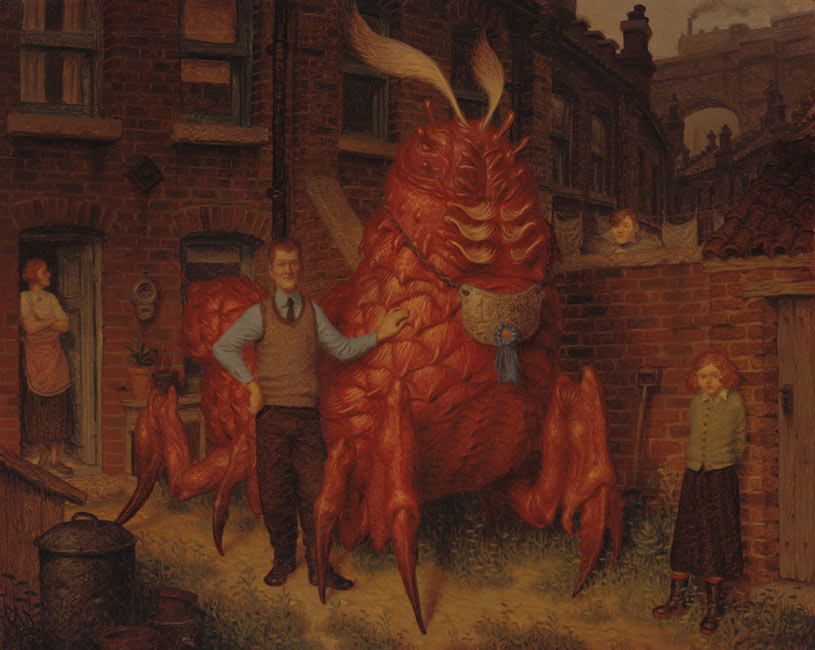 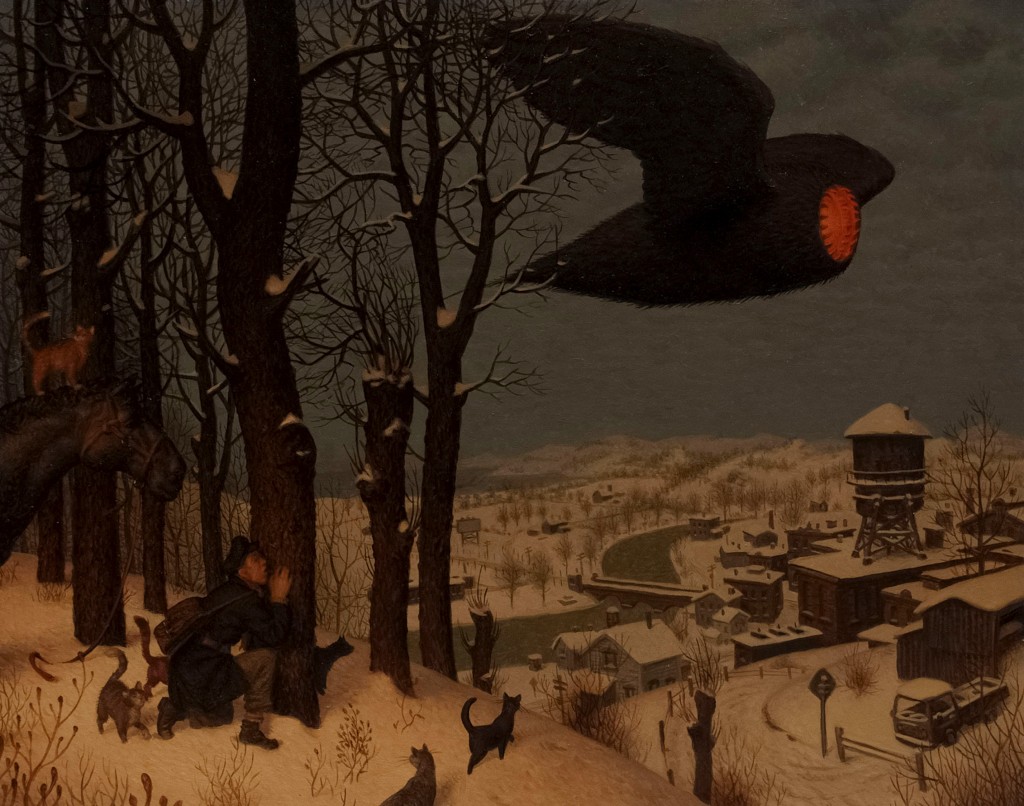 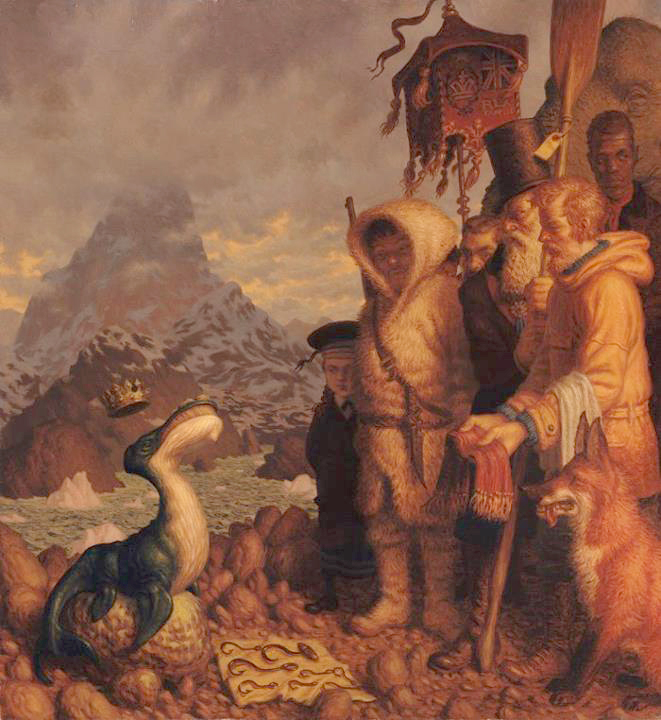 Combining grandiose narratives of the great ages of exploration with a distinctly paranormal bent, Ferguson’s work subtly hovers the line between fantasy, surrealism, and realism without ever falling into either of them fully.

Luminously painted and complex in their composition, his paintings retain an air of both melancholy and wonder at days gone past. 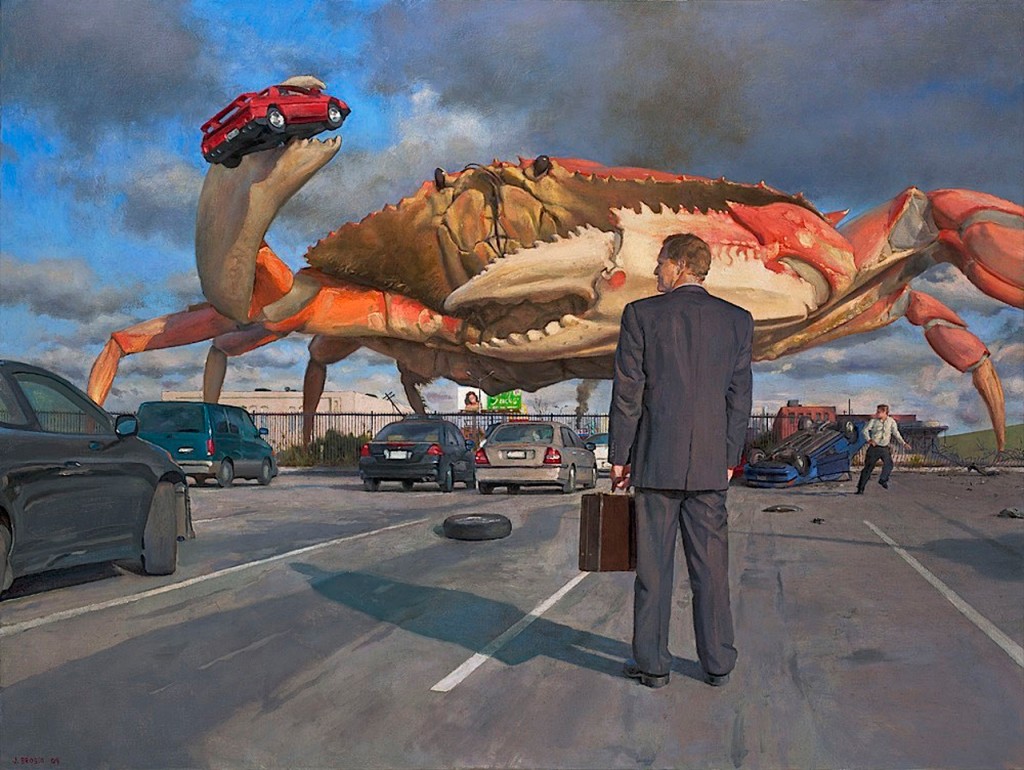 John Brosio’s work is probably the closest to science fiction and fantasy art that you can get in a pure surrealist. His paintings look like they could be production art for a science fiction film, one made by Ray Harryhausen, perhaps. That’s not a coincidence. Brosio cites Harryhausen as an influence on his work, as well as Star Wars.

“The period between birth and the opening of Star Wars almost ten years later was spent drawing for the most part. Lots of monsters. Lots of Wizard of Oz. I had a crush on The Wicked Witch. I loved the Ray Harryhausen films, etc.” says Brosio.

Brosio studied at University of California and Art Center College of Design, Pasadena. His love for science fiction and fantasy art led him to work briefly for George Lucas at Industrial Light and Magic. He did production art for films such as Ghostbusters 2 and Back to the Future Part III, before devoting himself entirely to painting 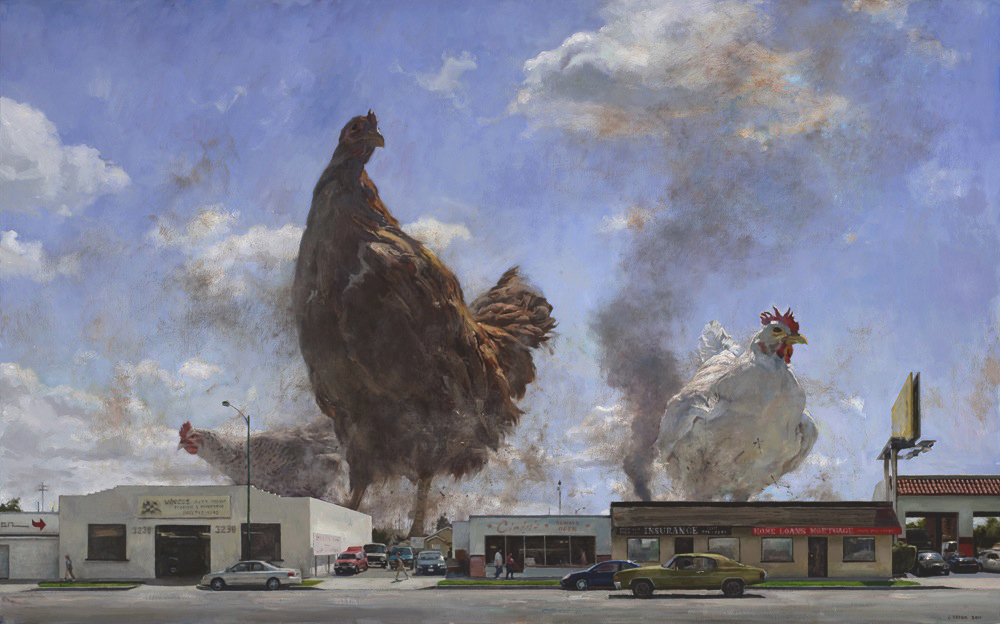 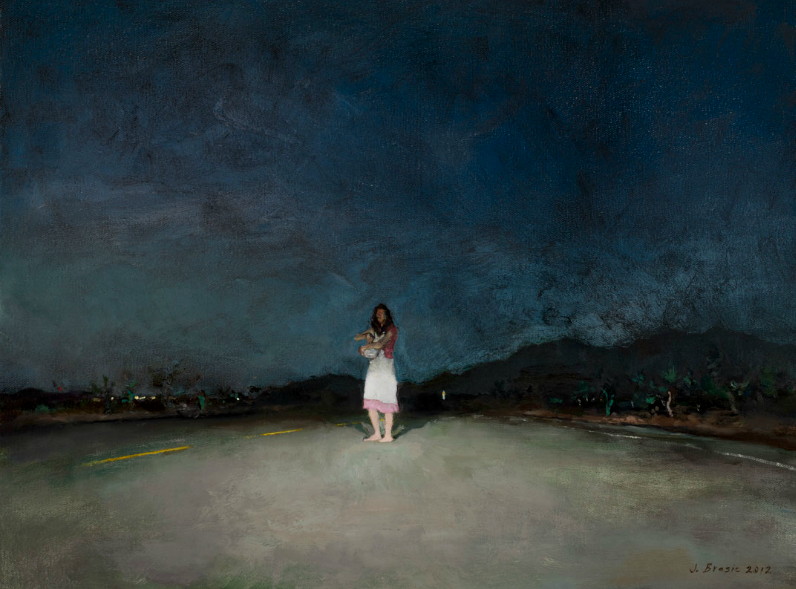 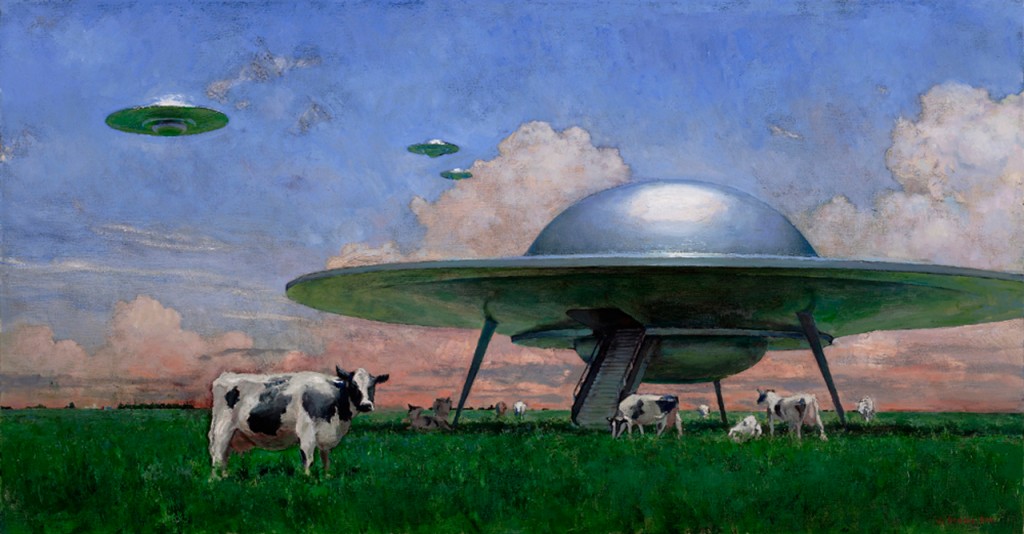 That influence is clearly visible in his work. A science fiction or fantasy fan viewing Brosio’s work sees a kindred spirit. Brosio even has a series of paintings that is a tribute to Star Wars which features everyday people wearing Star Wars masks and helmets. 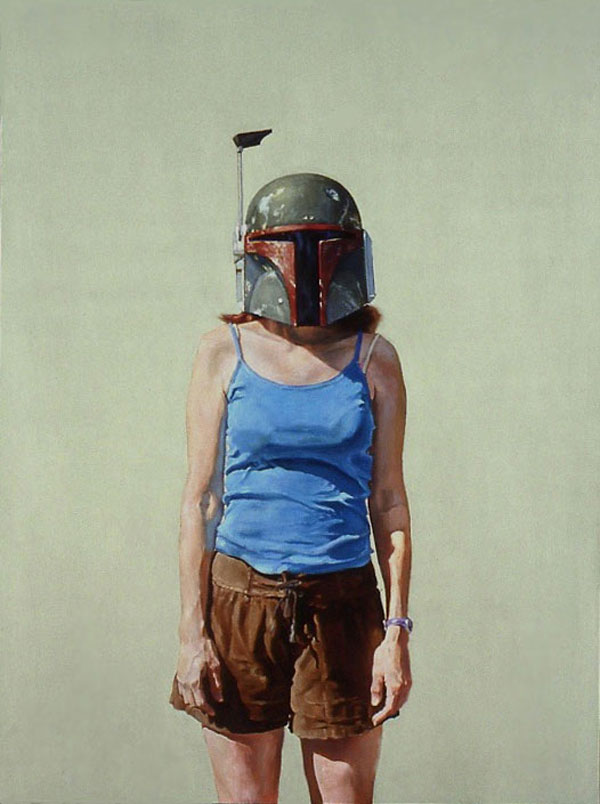 Brosio’s work blurs the line between surrealism and fantasy illustration in ways that make most doubt that there ever was a line there to begin with.

Next week I will move on to another topic but I will certainly revisit surrealism again in future.

Celebrations of Afrofuturism are coming into their own; K. Ceres Wright attends Blacktasticon 2018

Ice Worms, Snow Monkeys, and Ice Rats. Oh My! Or: a Couple of Fannish Hoaxes

The Voices of Fandom