Wylding Hall is a mixed bag, but there is tremendous craft in the novella, and it can certainly be enjoyable to read. 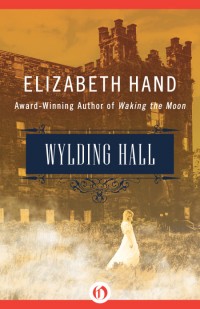 Ghost stories generally come in two flavours. On the one hand, you have horrifying creatures finding ever more creative ways to separate living human beings from their limbs and viscera. The basic emotion evoked by such stories is disgust. On the other hand, you have stories where creatures hide in the shadows, half-seen, their goals and methods of attaining them slowly emerging. The basic emotion evoked by these stories is dread.

Elizabeth Hand’s Wylding Hall is an example of the latter ghost story. (If it had been an example of the former, I wouldn’t have read it, much less be reviewing it: if I want to experience the horror of indignities being heaped upon living bodies, I just read my daily newspaper.) The novella is a quick, fun read, although it is not without its weaknesses.

THE STORY: Windhollow Faire is a 1960s folk band that has released one solid, if not especially groundbreaking album. At the urging of their manager, the members of the band retire for three months to an old English mansion, Wylding Hall, to work on material for their follow-up album. Strange events occur at the venue with increasing frequency, leading to both the release of the band’s triumphant second album and its complete dissolution.

Wylding Hall is told in the present, as surviving members of the band describe to a documentary filmmaker their version of events. The novel is made up, for the most part, of interviews with the band members, its manager and a couple of other characters who are part of the story of what happened in those three months. This structure feeds into the accumulating dread of the story in a couple of ways. For one thing, because characters are recounting events that have already happened, the reader learns almost immediately that the story will end in tragedy, creating an anticipation that builds as the story progresses. For another thing, the multiple points of view sometimes overlap, but also sometimes contradict each other; either way, the disjointed nature of the narrative serves to disorient the reader, adding to the dread.

Unfortunately, I found the voices of the different characters to be too similar, making it confusing, sometimes, to keep track of who was speaking. Now, I’m not a fan of the easy writing school tenet that every character in a piece of writing must speak with a distinct voice; characters who have grown up under similar circumstances will likely speak in similar ways, which, itself, is a source of information about them. But. In a traditionally written novel, character description can be used to help the reader differentiate characters whose vocal characteristics are similar; when the novel is told almost entirely through dialogue, a writer needs to be more careful about creating distinctive voices since they are the only way the reader can make out the different characters.

This problem is compounded by the fact that Hand sometimes offers almost poetic descriptions of setting and character. Don’t get me wrong: Hand has a great eye for telling detail. However, what would work well in a traditionally written story isn’t entirely credible when it is embedded in a character’s dialogue. I was sometimes brought out of the novella by a passage that had me exclaim, “That was lovely, but real people don’t talk like that!”

Just when you’re getting comfortable with all of the dialogue, is that…no, it couldn’t b – yes. Yes, it is: at roughly the half-way point of the novel there is a reprint of an article from NME. This is supplemented by a brief review of the band’s second album towards the end of the novella. I admire Hand’s willingness to switch up literary forms like this.

One of the strengths of Wylding Hall is the precision of its evocation of the music scene of the 1960s. The drugs and sex are casual (and the casualties are eventually quite real). People gather together to listen to new albums by favourite artists. A couple of people can bring an instrument or two and their voices to a pub for an impromptu performance and actually collect a little money. Hand brilliantly captures both the innocence of the time, the belief in youth’s endless possibilities, and the selfish and self-destructive behaviours that would soon lead to the historical moment’s end.

The novella is also full of references to period music (I think). One of the band members is named Les Stansall (perhaps a reference to Viv Stanshall, lead singer of The Bonzo Dog Doodah Band and narrator of Mike Oldfield’s Tubular Bells); another is named William Fogerty (a more obvious reference to Credence Clearwater Revival’s John Fogerty). One important plot point in the novella involves an apparent ghost on an album cover, which reminded me of the cover of an album by the band Strawbs (which Hand mentions towards the end of the novella). I cannot be sure if these references were intended or just a figment of my fevered imagination, but I always assume that references were meant unless shown evidence otherwise.

Wylding Hall itself is a fascinating creation, built and rebuilt over centuries, with a variety of nooks and crannies from various time periods. In a couple of passages, it would seem that the building reconfigures rooms and hallways to lead specific characters towards or away from some goal. This reminded me a lot of Mark Z. Danielewski’s brilliant experimental novel House of Leaves. All in all, Wylding Hall is an effectively creepy setting.

One last criticism: all of the band members have an unpleasantly mystical experience in the house, ranging from finding a room full of the corpses of dead birds to encountering a strange young woman in a library to climbing a narrow stone stairway that appears to stretch below and above into infinity. But nobody tells anybody else what happened. I appreciate that this is necessary for the novella to continue: if people started piecing together the strange things that were happening to them, they might think that the best course of action would be to leave, which would stop the story right there. However, the fact that all of these people are experiencing strange things and not telling each other strained this reader’s credulity.

Wylding Hall is a mixed bag, but there is tremendous craft in the novella, and it can certainly be enjoyable to read.

In this week’s viewing: Two shows are ending already, and your reviewer is looking forward to the end of another.

Artists used to get great exposure, back in the day. Now they’re fighting for more.

Matter Falling Into a Black Hole Moving at 30% Lightspeed Detected