Exultant is The Dam Busters in space, or Star Wars stripped of its mythopoetic resonances and bolstered by hard physics. 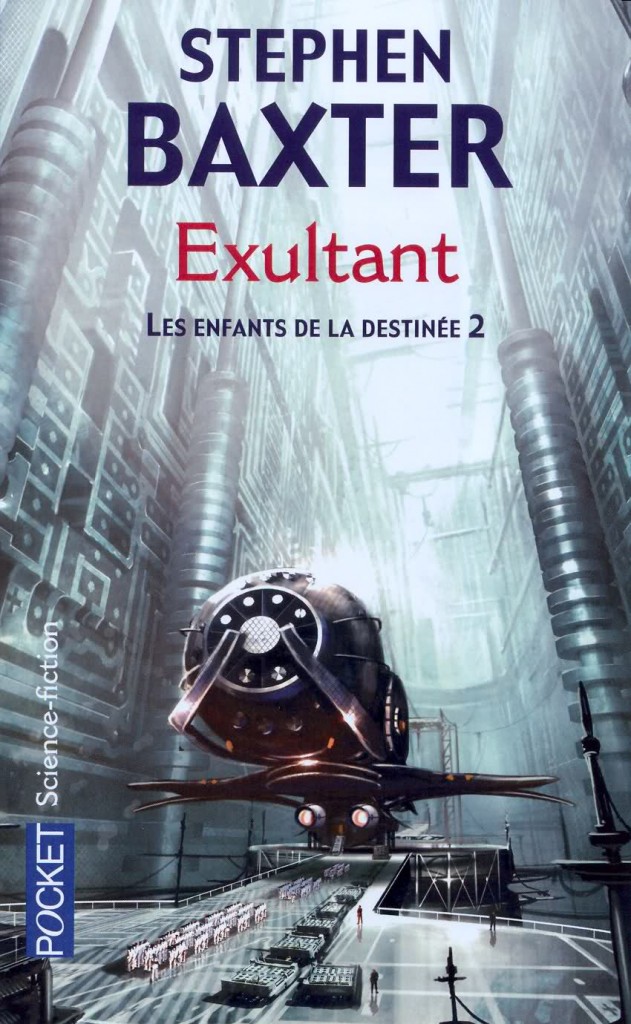 Exultant is that rarest of things, a novel which is part of not just one but two series, yet which stands completely alone as a self-contained work and can be read without any knowledge of the wider saga. This 2004 novel follows Coalescent as the second volume in Stephen Baxter’s Destiny’s Children series, as well as expanding his earlier Xeelee Sequence. Where the previous book was set entirely on earth in the past and present (bar a far future coda), and was a mixture of historical adventure, personal drama and biological SF, Exultant is hard SF space opera set some 20, 000 years hence. It can be read quiet happily with no knowledge of Coalescent.

It is set in the same fictional universe and shares a few reference points with the earlier book, but the characters and story and completely separate, and the feel and tone of the novel are very different. The intimate contemporary sensibility of the modern day sections of Coalescent give way to old fashioned space opera, turbo-charged by a healthy dose of the sort of staggeringly vast cosmological visions and hard science we have come to expect from Baxter. Beyond this, the novel also slots into the Xeelee Sequence with which Baxter made his name, first in short stories and then in the novels Raft, Timelike Infinity, Flux, Ring and the collection Vacuum Diagrams. Not that it is necessary to have read these either to enjoy Exultant, though it did make me want to go back to those titles and read them again.

As for the story… Exultant makes no secret of paying homage to the WWII movies Baxter must have grown-up with, those same movies which in part inspired George Lucas to create Star Wars. Exultant is The Dam Busters in space, or Star Wars stripped of its mythopoetic resonances and bolstered by hard physics. It is the story of a pilot, Pirius, who goes on a journey of discovery from the heart of the galaxy to the inner and outer reaches of the solar system and back, becomes a leader, builds a new squadron, over comes technological challenges, and eventually leads his crews on a bold assault on the enemy’s ultimate stronghold. Pirius is of course Guy Gibson, or Luke Skywalker…

Filling in for Barnes Wallis, or Obi Wan Kenobi, is Nilis, who comes across like a cross between Slatibartfast and The Doctor as originally played by William Hartnell. The German Dams / The Death Star, is played by the black hole at the centre of the galaxy. The bad guys are the Xeelee, who predate Babylon 5 by some years, but which these days seem to ominously prefigure the coming of the Shadows.

Baxter has fun playing imaginative SFnal games with stock clichés, including the seemingly obligatory two pilots involved with the same woman. The twist here being that due to time travel both pilots are the same man, dubbed for sake of clarity Pirius Red and Blue (and enabling Baxter to give us Red and Blue Leaders …)

What saves Exultant from merely being a posh Star Wars wannabe is Baxter’s remarkable story-telling verve and range of invention. Exultant reveals a universe of considerable complexity which both revisits aspects of the previous Xeelee novels and stories and re-complicates what has gone before. There is some astute political commentary on the benefit to politicians of maintaining a state of perpetual war, with influences drawn from the trenches of 1914-1918 and the caustic dystopia of 1984. Given the novel was written at the height of the implicitly endless ‘war on terror’, Baxter turns his pessimistic eye to power structures with appropriate cynicism.

The tale itself is essentially a turning point within the midst of the overall Xeelee sequence, one both comparatively small in the overall scale of the series, yet with implications as broad as anything in Baxter’s oeuvre. As recounted here the entire history of life in the universe up to humanity is dazzling, and few writers create so convincingly ‘alien’ aliens as Baxter.

If finally Exultant lacks the visceral excitement we might expect from such a story, this is down to the author fundamentally being more concerned with ideas than character, even to the somewhat anti-climatic finale in which action gives way to one more overriding cosmological concern. Ultimately Baxter is far more interested in the fate of the universe than the fate of his characters, yet Exultant delivers a real sense of wonder and an unfolding drama on multiple scales which is often exhilarating. An odd mix of the wildly imaginative and the deliberately formulaic, Exultant is a far more satisfying read than Coalescent and a powerful piece of fiction in its own right.

Steve Jackson is one of the biggest names in British fantasy fiction. Along with Ian Livingstone, he was one of the founders of Games Workshop, one of the first major stores selling role-playing games in the UK. In 1982, Jackson and Livingstone brought fantasy to the doorsteps of British schoolkids with the publication of their […]

Godzilla, Or: Why Bother With Humans?