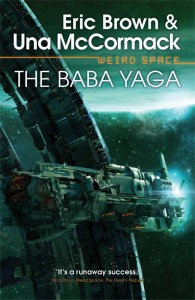 Weird Space: Baba Yaga by Eric Brown and Una McCormack is the latest novel utilizing the core elements found in classic space opera with a few of the distinct components that have proven successful to the duo of established authors.

This science fiction adventure was recently released in the U.S. on June 30th, 2015 (soon to be released in the U.K. on July 16th, 2015) by Abaddon Books, a British imprint of Solaris Books. Billed as the third book in the Weird Space series originally created by Brown, it is actually a stand-alone tale set in the same universe. You don’t have to read the first two books to enjoy Baba Yaga, but if this is where you start, you’ll want to go back and read them too.

For those left wondering, the first book in the series is titled The Devil’s Nebula (2012), where a totalitarian government known as the Expansion Authority navigates with the ever dangerous empire of Vetch extraterrestrials in the face of an infestation from a trans-dimensional form known as the Weird. The validity of the Weird and the inconceivable dangers they bring is further examined in the second novel of the series titled Satan’s Reach (2013).

In Weird Space: The Baba Yaga, the growing threat of the Weird has already driven humanity to extreme paranoia, and the propaganda arising from the authorities within the Expansion Authority has gone far beyond the intention of security purposes and extended to the bureaucratic injustices of those seeking power.

Expansion Authority senior analyst Delia Walker is determined to convince other members that the only way to survive the Weird insurgence is through communication with the unknown enemy. But others are determined that the only solution is through war. Following the brutal global extermination of a world facing the possibility of a Weird incursion, Walker finds herself on sacked from the Authority and on the run. She knows too much.

Aboard the battered and not-so-legal space ship called the Baba Yaga and keeping just ahead of a team of mind reading killers, she meets a ragtag group of characters who help her unravel the mystery behind the government lies and truth about the unknown force known as the Weird.

Though the specific contributions from each of the two authors is not definitive, there are some emblematic features that stand out that fans might recognize. Besides creating the Weird Space saga, the entrenched character development that allows readers to accept such a twisted future society has the familiar stamp of Eric Brown. And his penchant for representing believable characters with telepathic abilities can be found in his other novels, a talent with prose that others have tried and failed.

Una McCormack is an established author with a loyal fan base who follows her works in Star Trek and Doctor Who. Not to disappoint, Baba Yaga has a diverse range of characters who come from varying races and species who interact with the same mix of social grace and awkwardness that we’ve grown to love in the universes created by Gene Roddenberry and Sidney Newman. This is perhaps the ultimate “what if” element that keeps many of us reaching for the stars instead of burying our heads under the pillows.

As a social examination of government power, the book gives readers a lot to think about when it comes to authority, rights, freedoms, and the dependency of information. All of these can become cloudy in the hands of others, yet many blindly follow because of a blind faith in the system. Just like the mysterious Weird, not knowing is only half of the danger.

Weird Space: Baba Yaga by Eric Brown and Eric Brown is a fast paced read filled with colorful characters, intense suspense, and thought provoking drama. It’s the third book in the series, but it’s a good place to start if you haven’t already. You don’t need to read the other two, but face it, eventually you will.