The art of the clone: Hollywood doesn’t always get it right.

The latest rise of cloning themes in popular culture began with the media frenzy that surrounded Dolly the sheep in 1996 and quickly made its way into literature and film shortly thereafter. 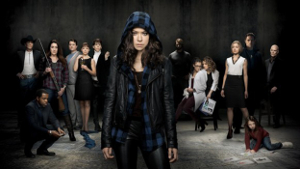 While cloning, or the exact genetic replication of DNA, does occur on its own in nature in the form of identical twins and bacteria replication, there are also two distinct methods of man-made cloning: artificial embryo twinning and somatic cell nuclear transfer (SCNT). Produced in a lab, both methods produce a genetically identical clone. In turn, we commonly see both methods used with varying degrees of accuracy in popular cinematic culture like in the 2000 sci-fi action film The 6th Day, and more recent hits such as Orphan Black and Jurassic World. In some of these situations, the use of clones as a primary plot device raises questions about what it is that defines our humanity and uniqueness as individuals, and whether it is nature or nurture that governs who we turn out to be.

The main difference between artificial embryo twinning and SCNT is that the former requires a very early embryo be taken, artificially split, and then reintroduced into the womb where the individual cells will continue to develop and eventually produce identical twins. This method is more basic than SCNT, which requires the nucleus of a non-reproductive (somatic) cell to be transferred into the nucleus of an egg cell, which is then similarly introduced into the womb and carried to term. Although research on cloning began at the end of the 19th century, it was not until very recently that scientists successfully produced clones in mammals using the SCNT approach, the first of course being Dolly the sheep. Since then scientists have made incredible advances in regards to cloning, resulting in its increased presence in popular films and media. 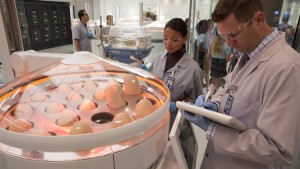 While scientists have nearly succeeded in attempts to clone extinct species, many are still skeptical about the possibility of bringing back dinosaurs like those seen in Jurassic World. In the movie, DNA is extracted from amber or other fossils and used to revive various dinosaur species that have been extinct for roughly 200 million years. Dealing with that kind of timeline, it is highly unlikely that a living donor could be found to carry the egg to term or that enough DNA samples would have survived millions of years of fossilization to reproduce an entire dinosaur genome.

In comparison, the series Orphan Black is much more scientifically accurate, and dare we say it, “realistic.” The show raises interesting moral, ethical and philosophical questions about cloning. Specifically, whether who we are is determined by nature or nurture, by genetics or by our surroundings, or by destiny or free will. When we look at identical twins we seen that even though they are genetically identical and in most cases grew up in the same environment, they still have personality differences. Furthermore, the show opens up a debate on owning and patenting genome sequences versus owning clones and treating them as fellow human beings.

On the complete opposite side of the accuracy spectrum, The 6th Day portrays cloning in the most scientifically inaccurate way possible. In this futuristic action film, set in a world where all animals can easily be cloned, a man comes home to find a clone has replaced him in his own life. The kicker here, is instead of the clones being created from embryos, DNA is extracted from the host and implanted into a “blank” adult human along with their memories and personality – essentially producing a copy of who they are at the exact moment the DNA was extracted. Highlighting the general misunderstanding about the fundamentals of cloning, this film and a string of other references in pop culture have only added fuel to the fire of confusion surrounding the phenomenon. 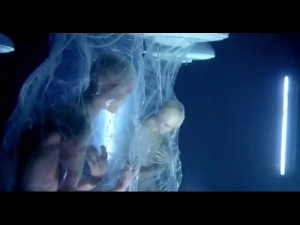 Despite the dramatic way in which it is portrayed in popular culture, cloning/genetic manipulation does have many beneficial qualities and could play a big role in the near future. Not only can human cloning help scientists identify and possibly cure genetic diseases, plant cloning has the potential to help revolutionize the food industry and create sustainable crops as a solution to food depletion. Furthermore, dead set in the era of global climate change, cloning could also positively affect the well-being of the environment in general. Scientists in California are taking strides to clone redwood trees in order to plant them internationally, in hopes of preventing deforestation while natural gas companies are looking at ways to decrease carbon dioxide emissions. Other starry-eyed scientists have even discussed cloning animals on the brink of extinction in an effort to preserve various species in rapidly changing ecosystems.

While cloning in pop culture provides a compelling story line for movies and tv series alike, it’s clear the creators of these shows are typically more concerned with the entertainment factor and less so the science behind the occurrence. But with such a huge following and growing interest in the fundamentals, it looks like it could soon be a real possibility. So if cloning research continues to progress in the same direction as DNA-storing USB’s and the de-extinction of animals, ones things for sure, the future is going to be a weird place.

Remembering old dreams via electrical shock. Maybe wireheading won’t be too far behind…

The artists who have chosen “Supernova” as their topic, distinctly verge toward the trippy.

‘King of Scars’ and Its Impact On The Grishaverse