Home Art Buck Rogers: The Way the Future Used to Be 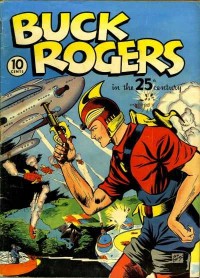 For more than a century the name Buck Rogers has been synonymous with science fiction. This was not always in a good way.

For as much as the futuristic adventures of the first science fiction hero were eagerly followed in newspapers, on radio, in film serials and later on television, it was always easy to dismiss the entire genre of science fiction as “that silly Buck Rogers stuff”.

Buck Rogers was the venue that got a generation excited about the idea of space travel and the wonders that the future might hold because of emerging technology and good old American know-how. Indeed, the Buck Rogers phenomenon continued on right through the space race of the 50’s and 60’s culmination in the landing of the first man on the moon.

All popular science fiction since then from Flash Gordon to Space Patrol to Star Trek owes a debt of gratitude to Buck Rogers.

And it all started in the pages of Amazing Stories. 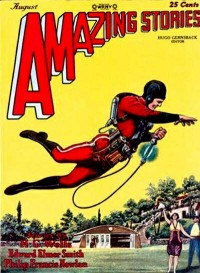 The August 1928 issue of Amazing Stories was where Buck Rogers had his debut in the story Armageddon 2149 by Phillip Francis Nowlan. Originally he was merely Anthony Rogers, a veteran of the Great War (World War I) and employee of the American Radioactive Gas Corporation. While investigating reports of unusual phenomena reported in abandoned coal mines near Wyoming Valley in Pennsylvania, Rogers is exposed to radioactive gas and falls into “a state of suspended animation, free from the ravages of catabolic processes, and without any apparent effect on physical or mental faculties.” Rogers remains in suspended animation for 492 years waking up in the year 2149 in a future America ravaged by war brought with the ruthless Han.

The cover illustration for that particular issue was not actually meant to depict Nowlan’s story. The image of a man using a personal flying backpack gracefully floats into the air while waving goodbye to his family on the ground below was, in fact, meant for the story The Skylark of Space by E.E. “Doc” Smith (another of the original architects of modern day science fiction). The image seems to have captured people’s imagination, though and in subsequent years has been mistakenly attributed as the first appearance of Buck Rogers. 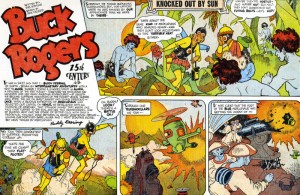 The story with all of its underlying racism and xenophobia, caught the attention of John F. Dille, president of the National Newspaper Service syndicate, and he arranged for Nowlan to turn the story into a comic strip for syndication. That was, in fact, the first time that Buck Rogers was illustrated for the general public and it was that comic book that fired up the imaginations of young readers.

The artists on the strip, Dick Culkins and later Russell Keaton, drew the amazing world of 2149 based on the concepts of inventor R. Buckminster Fuller. The strip was popular through the 30’s 40’s and 50’s under various artists and writer teams. The strip finally folded in 1967 (although it was revived briefly in 1979 under the guidance of artist Gray Morrow.

The comic strip proved popular enough to spawn a radio show and a film serial starring former Olympic swimmer Buster Crabbe. The combination of comic strip, radio and film brought the adventures of Buck Rogers to a vastly wide audience and made the character synonymous with science fiction. 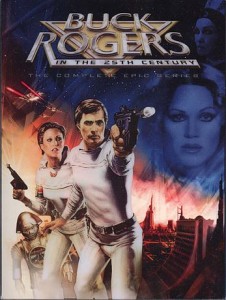 Spurred on by the massive success of George Lucas’ Star Wars films (a property that itself owes a great debt of gratitude to the original Buck Rogers) a television series, Buck Rogers in the 25th Century, debuted in 1979 and starred Gil Gerard as Buck Rogers. The television series tried to bring Buck Rogers fully into the modern age, dispensing with his signature helmet and jet pack. It achieved moderate success and was the subject of much derision at the time. Nevertheless, fans of the show remember it kindly.

Buck Rogers today is no longer an artifact of the future. It is a product of the past and most look back on it with nostalgic indulgence. For many it represents the old attitudes about the future where technology and heroic ingenuity would make the future, an attitude that has long since fallen away. As people say, the future is not what it used to be and Buck Rogers is a character that clearly represents the way the future used to be. Sadly that vision seems naive to us today. Buck Rogers, for all its futuristic trappings, remains a dusty relic of the past.

Today there are plans to bring Nowlan’s original novel to the big screen. Perhaps, after all of this time, Buck Rogers will find his way into the 21st century.